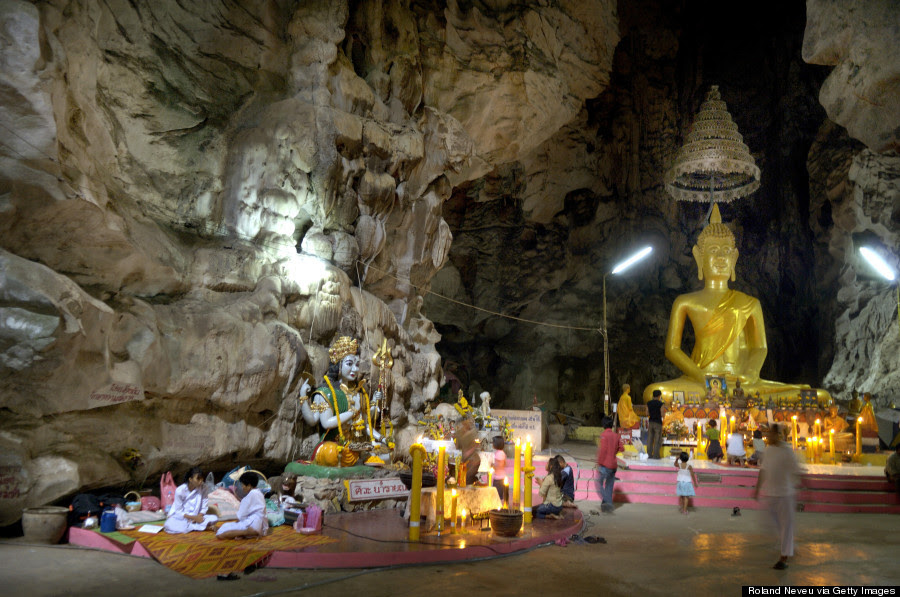 Buddhist temples located inside caves,
The isolation of these sites serves to intensify the spiritual connection experienced by visitors. While some places of worship use architectural height to draw attention up to the heavens, these cave temples highlight the value of spiritual treasures that lie within.
Datdawtaung Cave 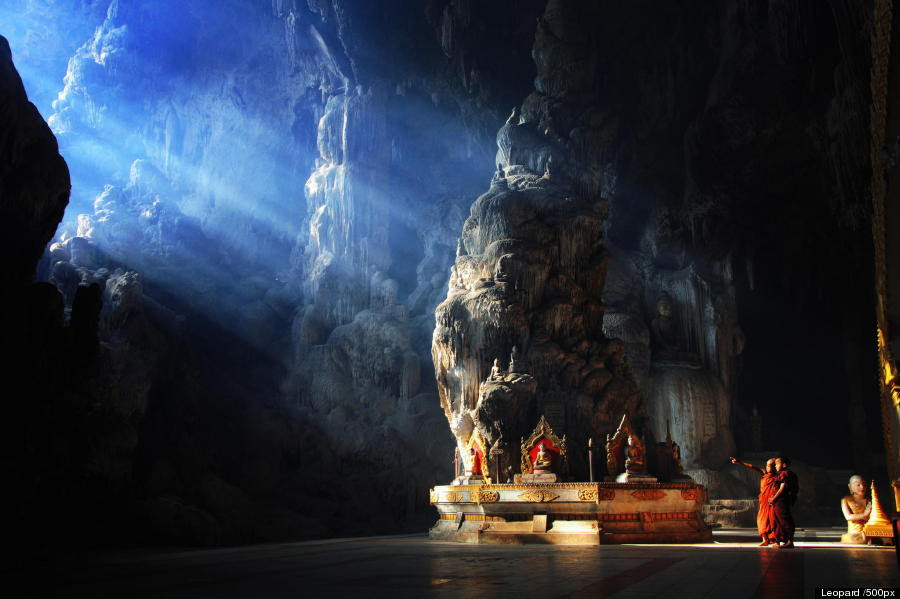 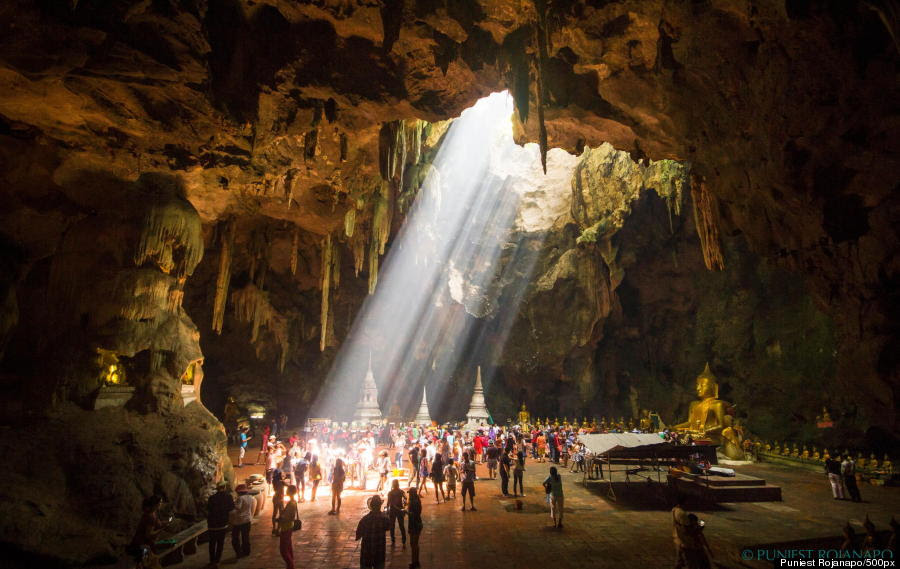 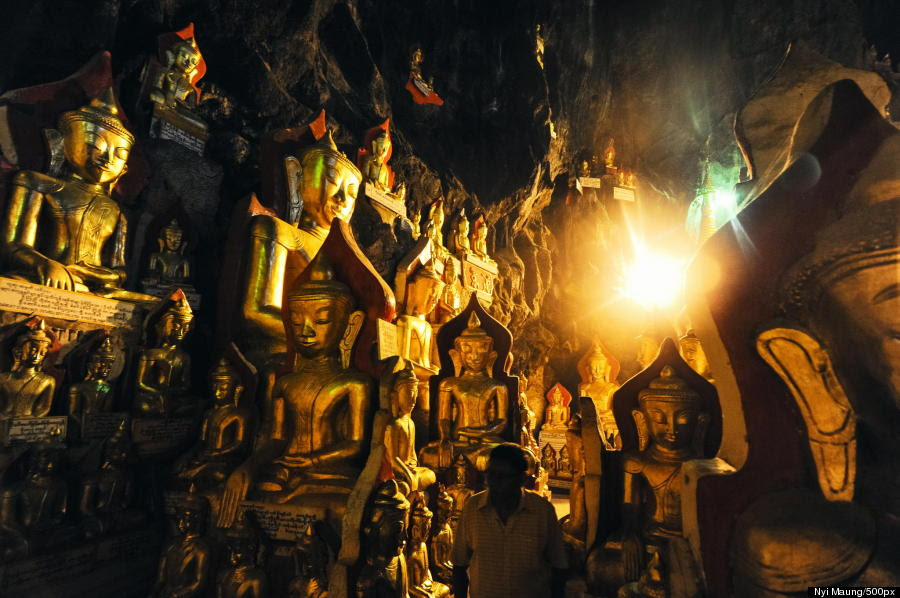 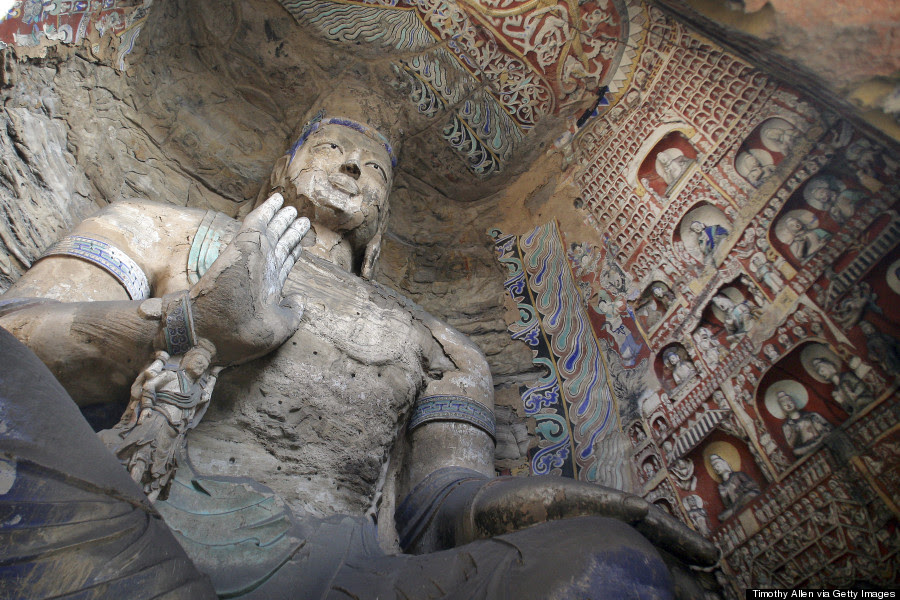 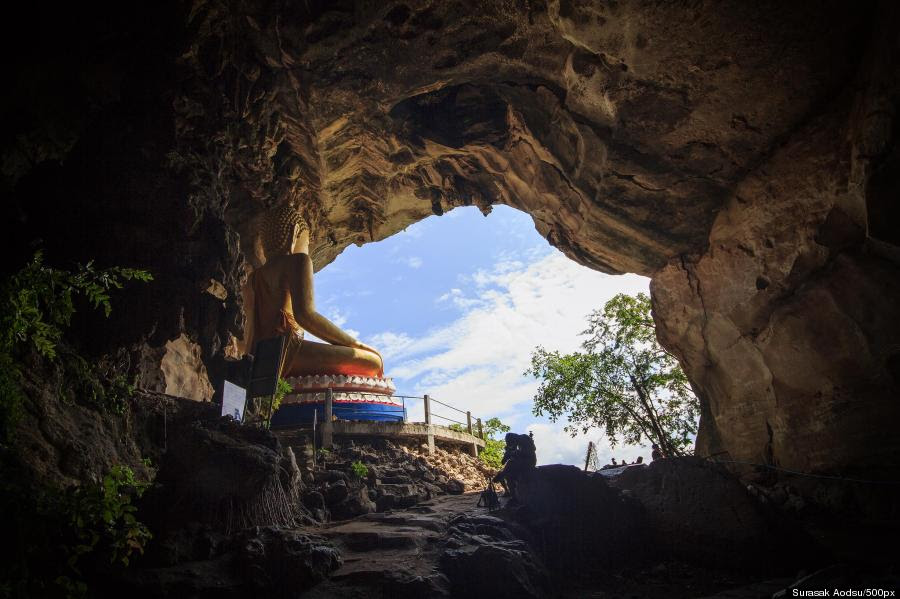 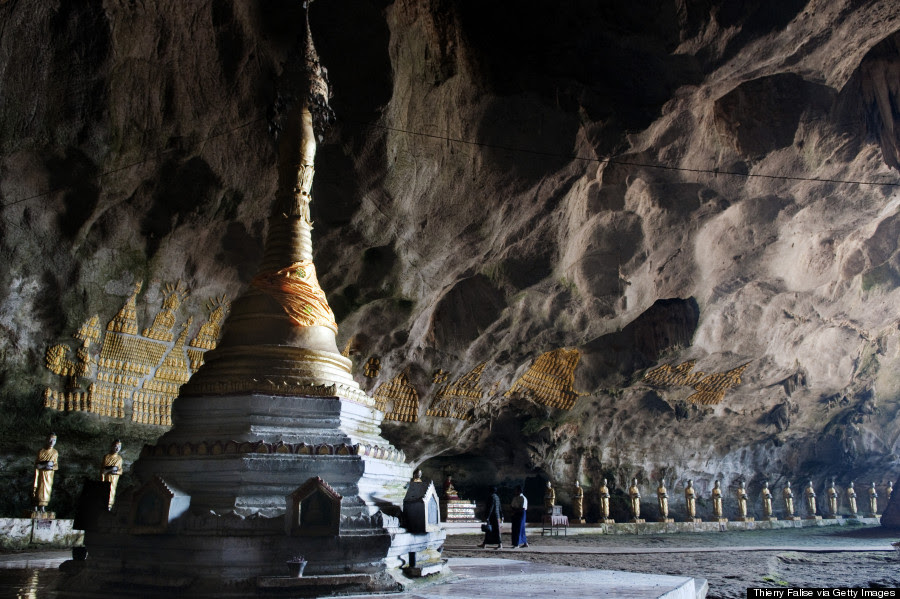 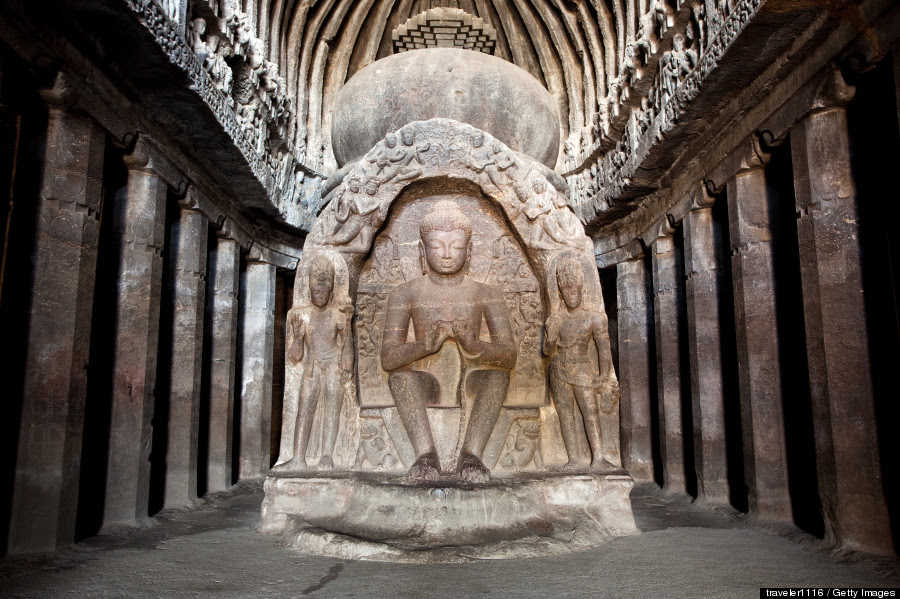 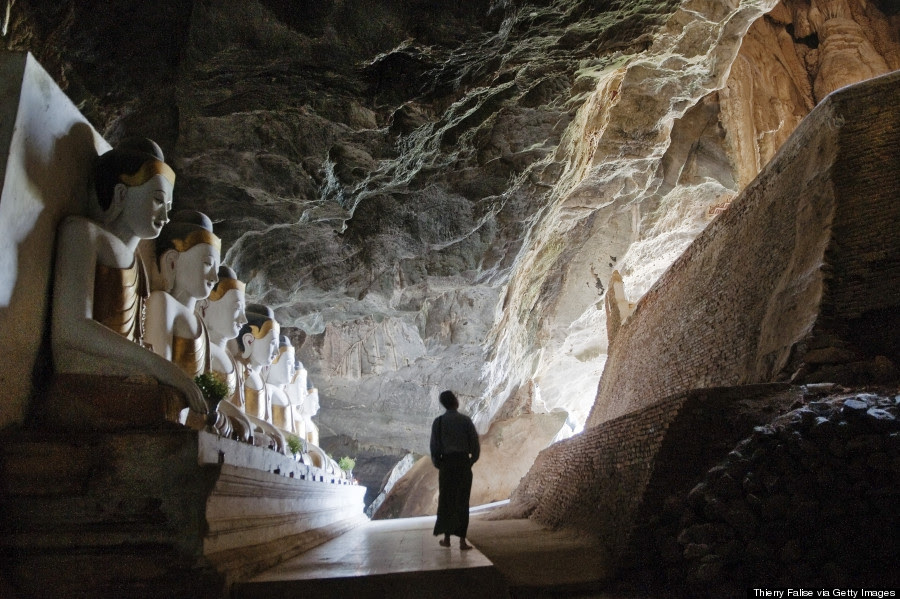 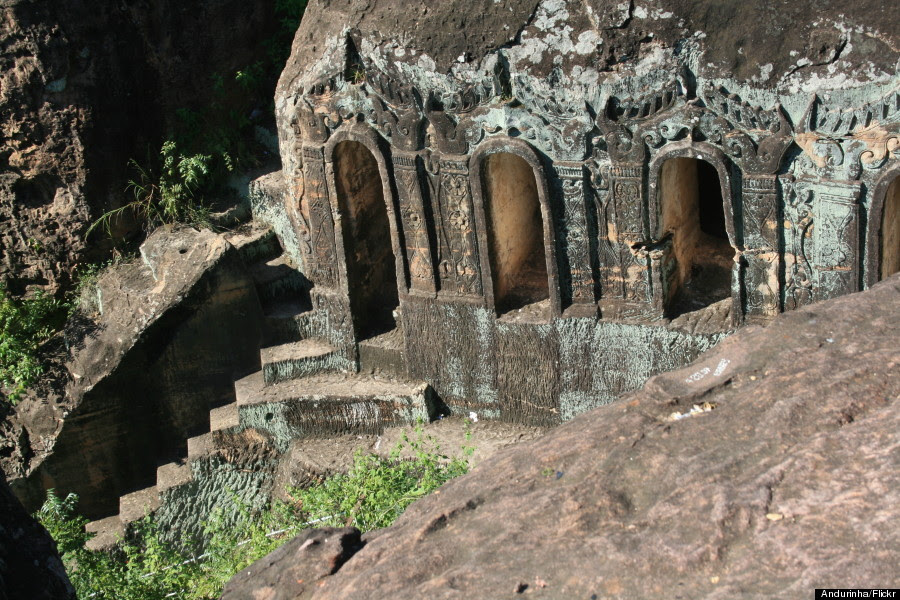 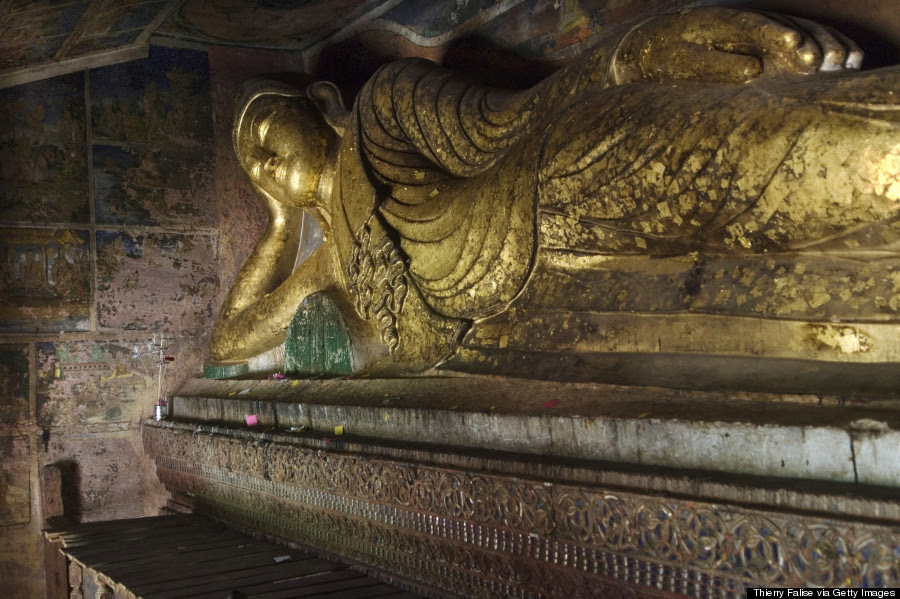 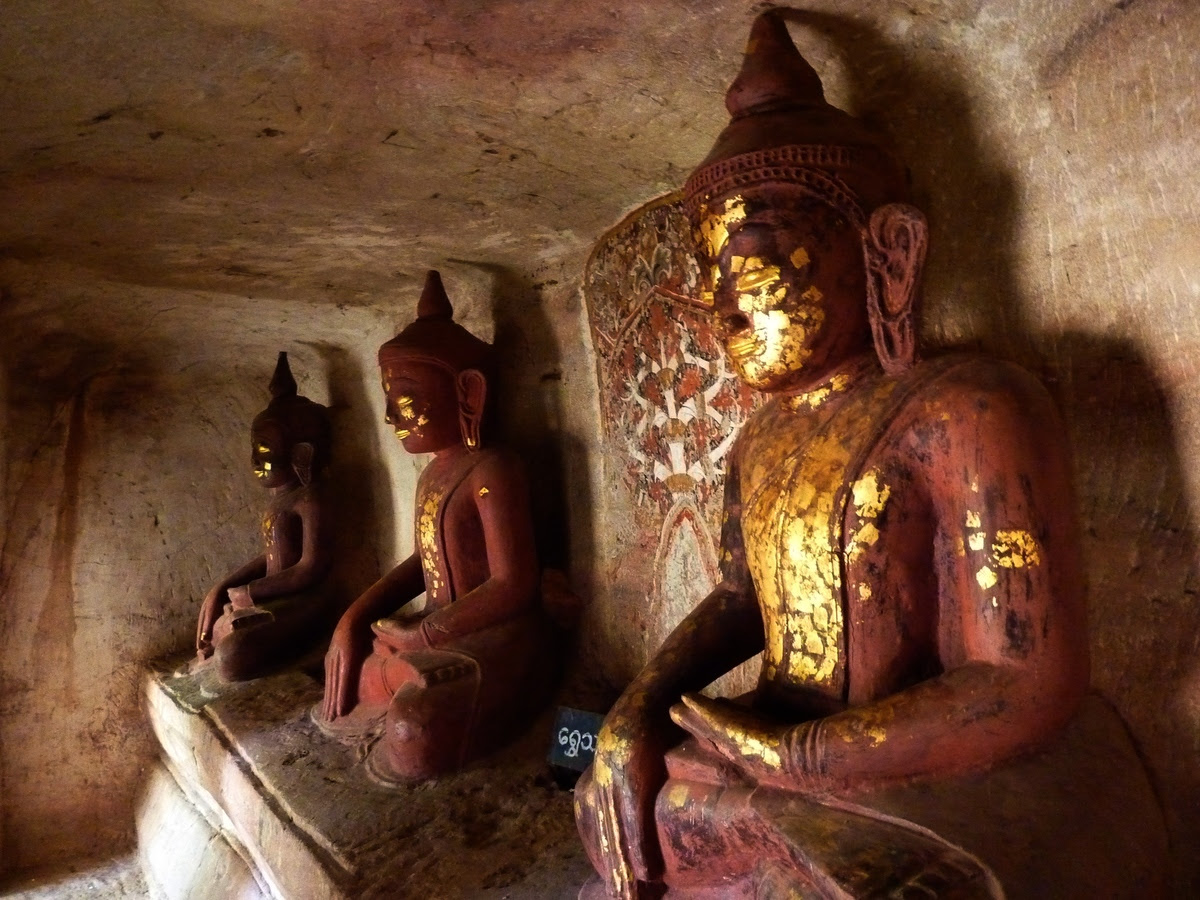 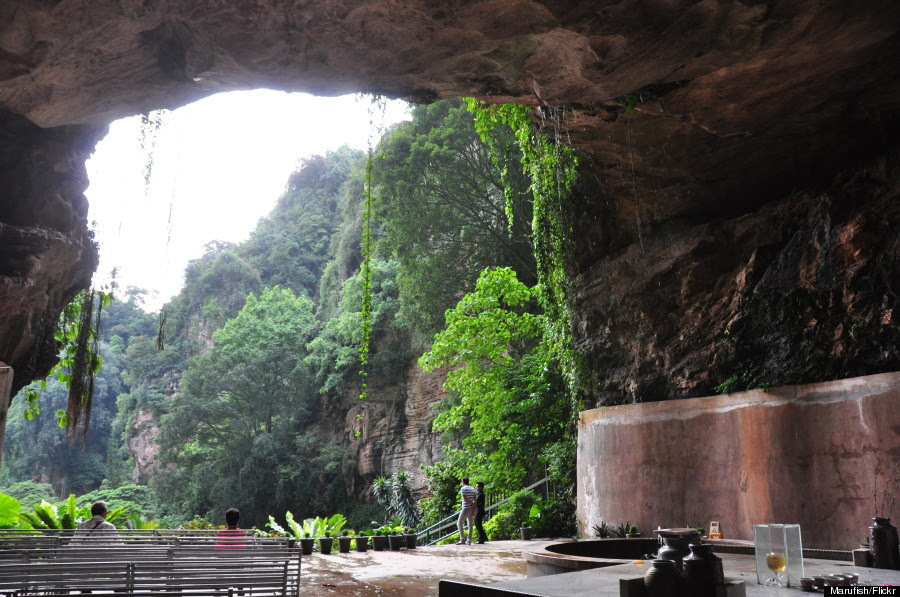 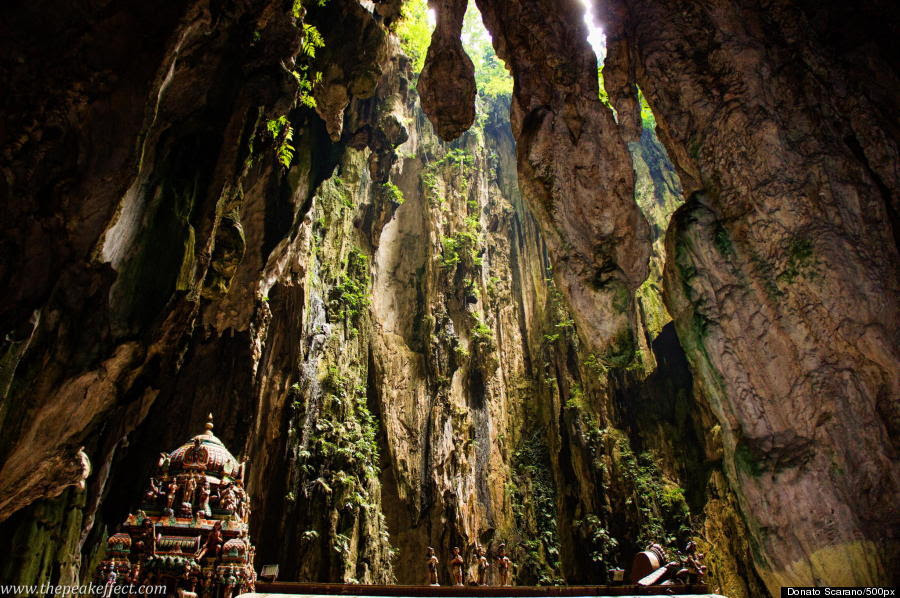 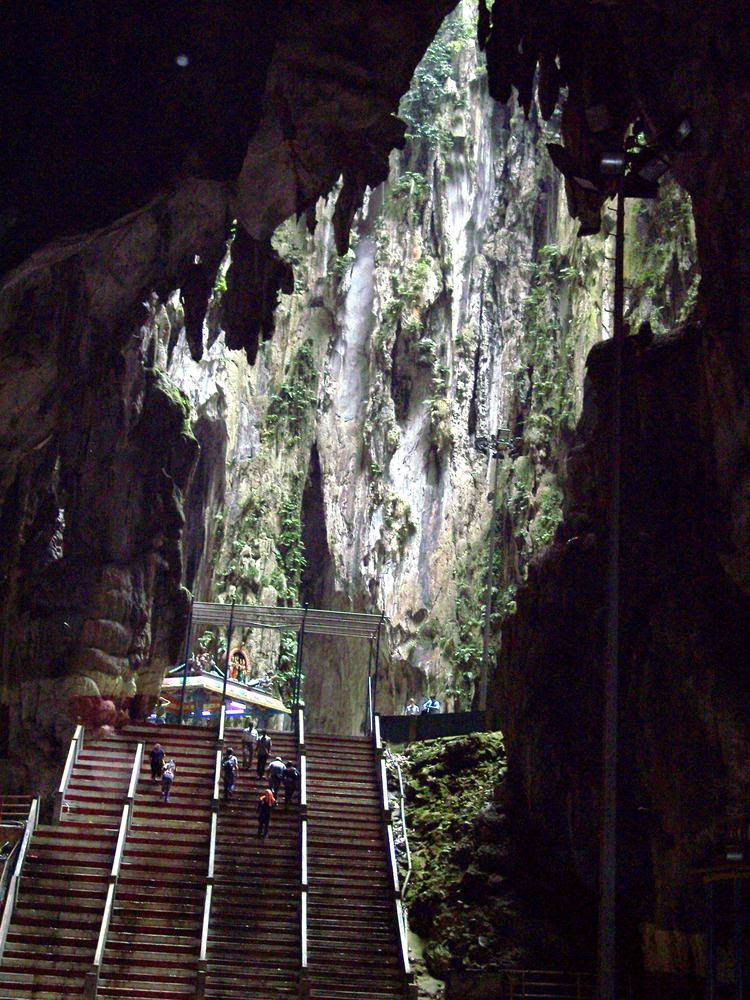 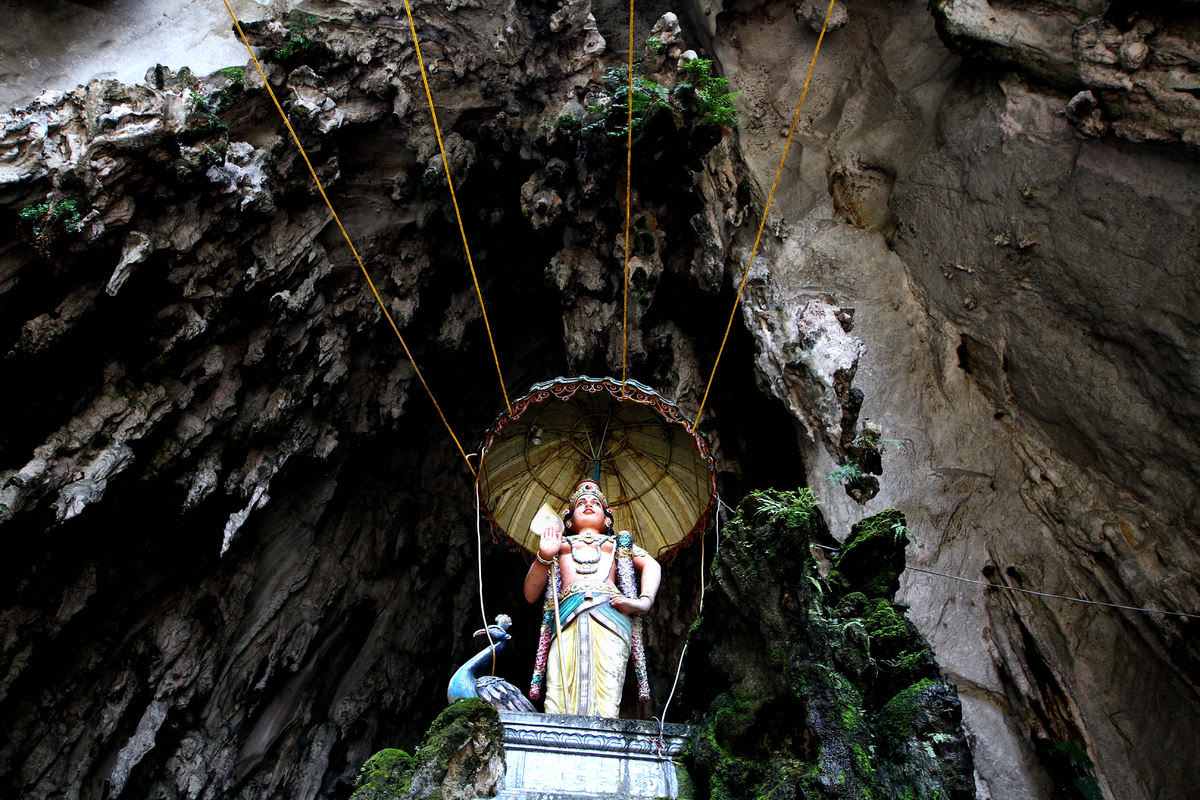 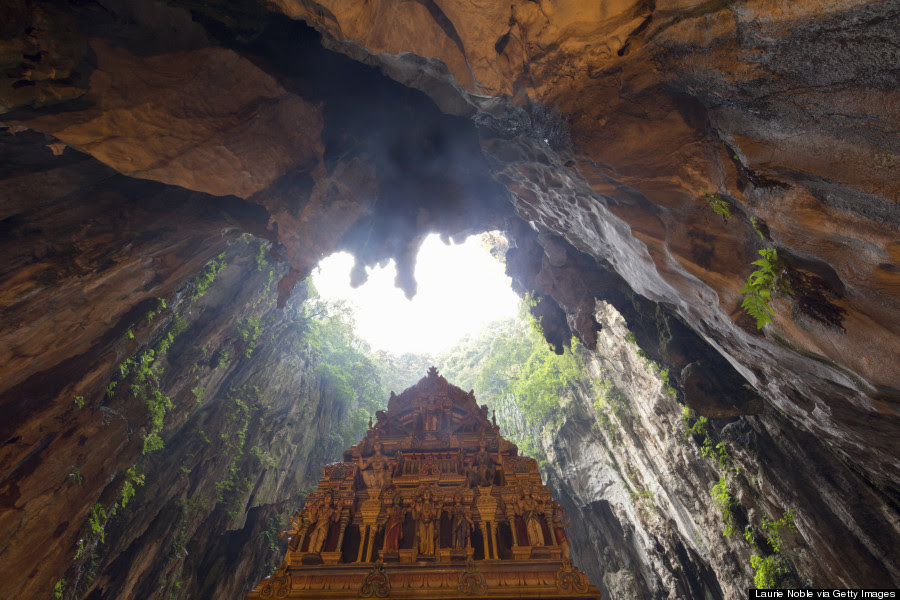 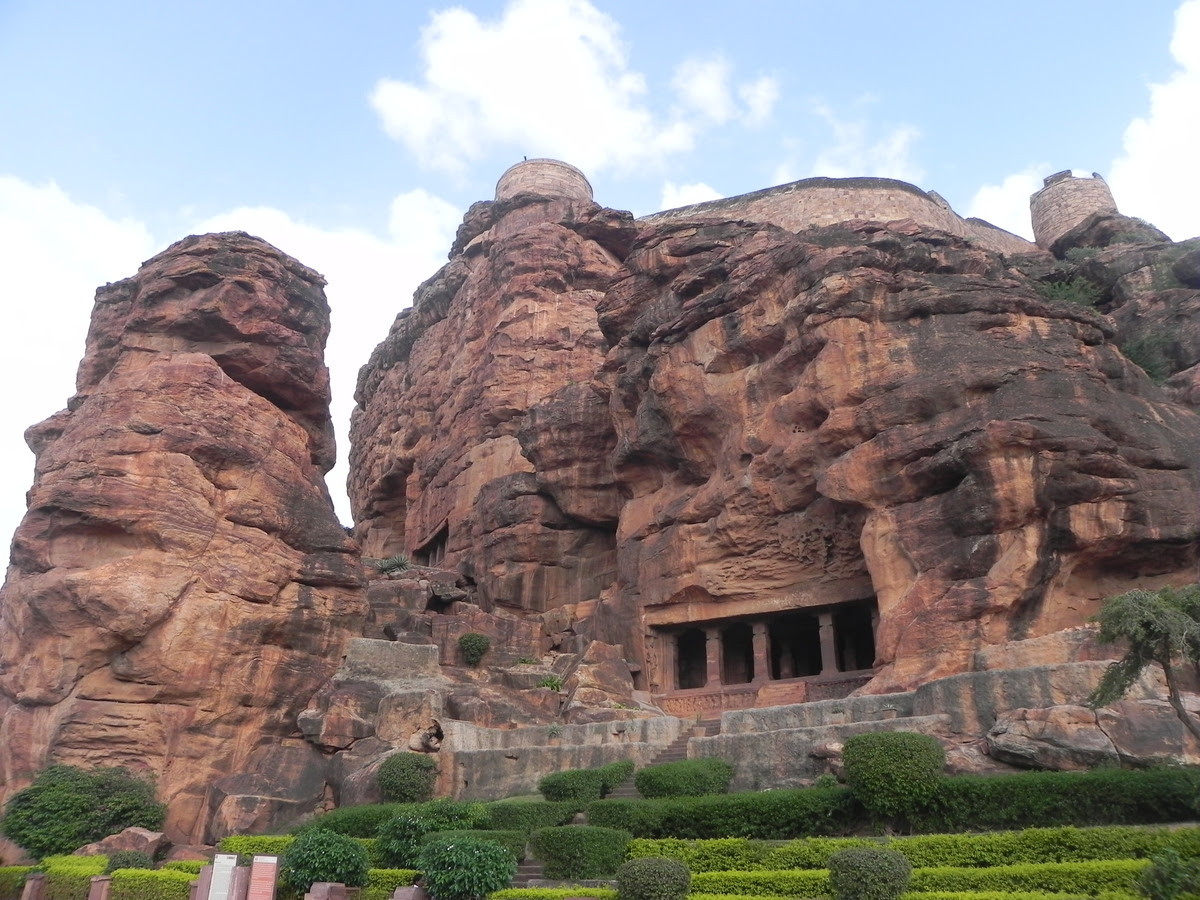 Badami Cave Temple
Karnataka, India
The fifth cave in the complex is used as a Buddhist temple. 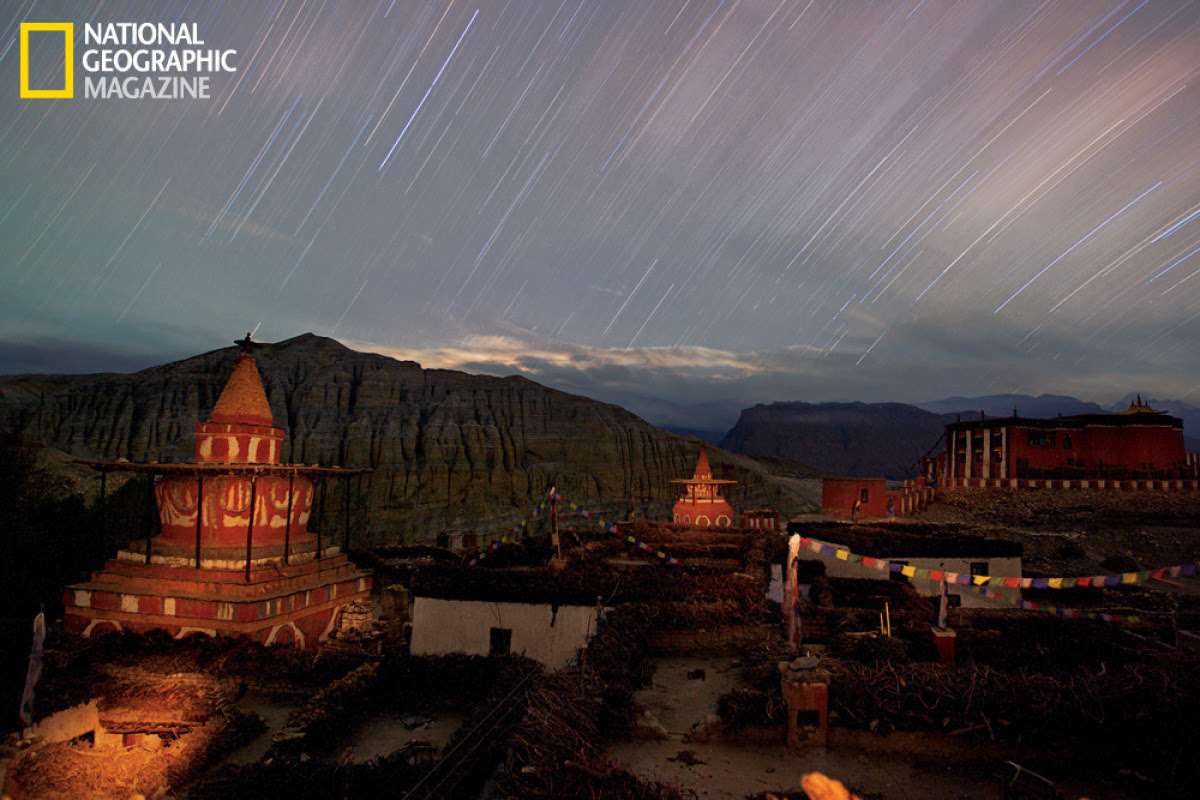 Dusk falls over the temples and homes of Tsarang, once the region's most important town. In Mustang, where the centuries have not disrupted the traditional rhythm of life, the caves offer clues to a time when the remote Himalayan kingdom was a hub linking Tibet to the rest of the world. 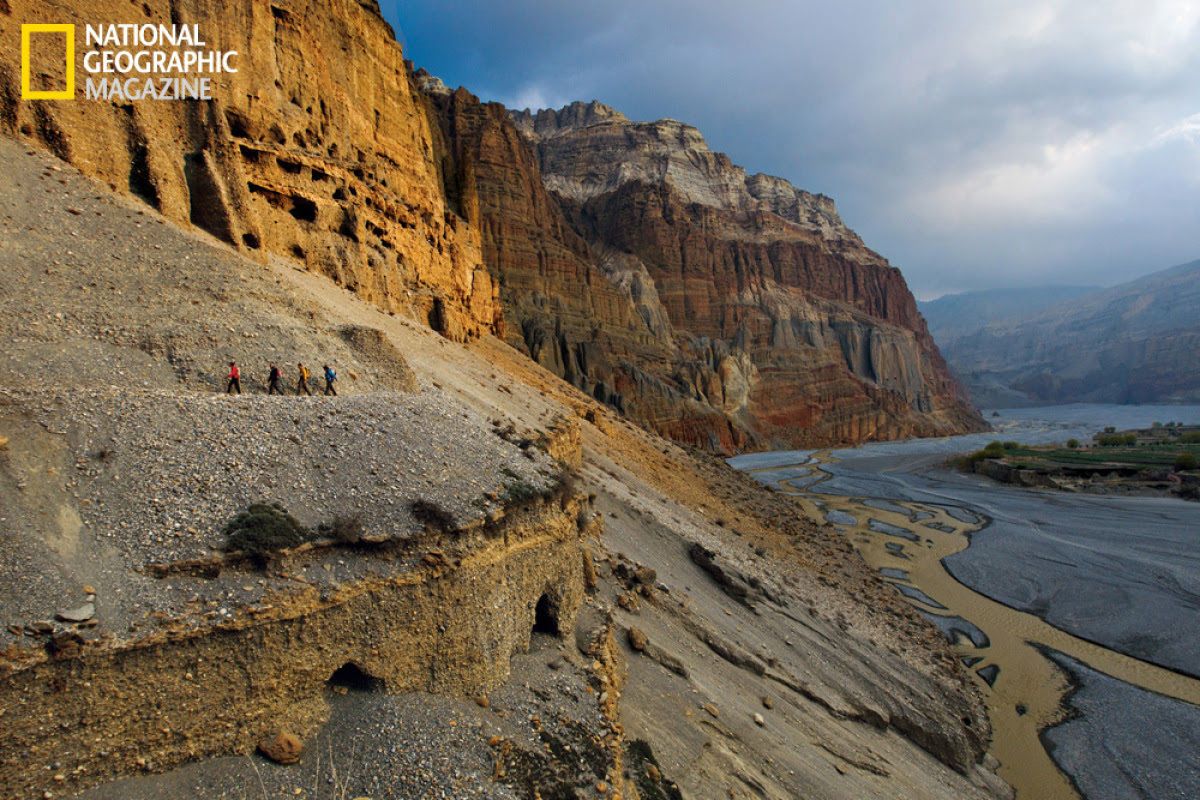 Posted by Decoding Hinduism Pradeep Singh at 3:21:00 PM No comments:

A virtual tour of famous Buddhist archeological sites in Gujarat:

Vallabhi: Ancient references indicate that in the 7th Century A. D., Vallabhi was one of the significant Hinayana Buddhist universities and was comparable to Nalanda’s Mahayana Buddhist University. In Vallabhi, Hieun-Tsang had confirmed presence of about 100 monasteries accounting for around 6000 Buddhist monks and also found foreign students in Vallabhi University.

Devni Mori (Sabarkantha): Devnimori was an important Buddhist monastic center 1600 years ago. A huge site consisting of Stupa, Chaitya and Vihara is found on the river Meshwo near Shamlaji. The relics consisting of stone casket having original names of Gautam Buddha with detailed inscription were found from Devni Modi.

Junagadh: One of the best examples of the Buddhist ideologies is found at Ashokan Rock edicts. It contains inscriptions of three dynasties which speak the great popular faith and its healing power to convert the King. Khapra-kodia caves are datable to 3rd-4th century A. D., it is a group of 10 shelters made in rock cut style, used by Monks as a monsoon shelter. Apart from these Upperkot caves and Baba Pyara caves are known as Buddhist archeological sites in Jungadh.

Khambhalida Caves: Located near Gondal in Rajkot, Khambhalida caves is the only site with perfectly identifiable carvings of Boddhistava. It was probably a worshiping site for all surrounding people having faith in Buddhism and therefore, it is one of the rarest sites, as most of the monasteries were residential quarters.

Talaja Caves: About 32 kms from Palitana (famous pilgrimage for Jains), lies Talaja. The most impressive structure in Talaja is, the Ebhala Mandapa – a large hall fronted by four octagonal pillars. A group of 30 caves is nestled in the middle of hillock that was primarily used during monsoons for 4 months resting period.

Sana Caves: The remains of Buddhist establishment of Sana, is located in Amreli District near Rajula. Believed to be among the earliest caves of Western India dating from 2nd century B. C., the most interesting group has Ornate Carvings and Stupas, Rock Cut pillows, Benches and Chaityas. There is a hill in Sana that has 62 rock shelters scattered at different levels.

Siyot Caves: Located in Lakhpat Taluka of Kutch, Siyot must have been one of the 80 monastic sites that the 7th century Chinese travelers reported at the mouth of Indus River. It is believed to be a Shiva Temple before the Buddhist Monks occupied the caves.

Kadia Dunger Caves: 7 caves and monolithic lion pillars are presently found in Kadia Dungar in Bharuch District. The caves are located at the highest altitude having the figures of elephants and monkeys inscribed in it, also, some inscriptions in Brahmi language are found in the caves.

Shri Modi himself has taken keen interest in the activities and has made the Government machinery work, to develop these Buddhist sites as a tourism circuit in par with international standards and promote them globally.
— in Gujarat, India.
Posted by Decoding Hinduism Pradeep Singh at 6:36:00 PM No comments:

Email ThisBlogThis!Share to TwitterShare to FacebookShare to Pinterest
Labels: BUDDHISM. MANY UNIVERSE .EARTH

Buddhist view of many universe,earth is just speck. 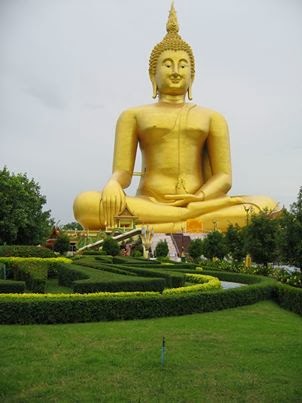 There are many universe apart from this solar system we are in as told by Hindu Scriptures-
Buddha talked about this ages ago. He talked about “world systems” consisting of a solar system, and then multiple groups of solar systems.


In the light of modern, scientific discoveries, we can appreciate the limitations of the human world and the hypothesis that other world systems might exist in other parts of the universe.

The existence of these other-world systems is yet to be confirmed by modern science. However, modern scientists are now working with the hypothesis that there is a possibility of other forms of life existing on other planets. As a result of today's rapid scientific progress, we may soon find some living beings on other planets in the remotest parts of the galaxy system. Perhaps, we will find them subject to the same laws as ourselves. They might be physically quite different in both appearance, elements and chemical composition and exist in different dimensions. They might be far superior to us or they might be far inferior.

Why should the planet earth be the only planet to contain life forms? Earth is a tiny speck in a huge universe. Sir James Jeans, the distinguished astrophysicist, estimates the whole universe to be about one thousand million times as big as the area of space that is visible through the telescope. In his book, The Mysterious Universe, he states that the total number of universes is probably something like the total number of grains of sand on all the sea shores of the world. In such a universe, the planet Earth is only from the sun which takes a seventh of a second to reach the earth, takes probably something like 100,000 million years to travel across the universe! Such is the vastness of the cosmos. When we consider the vastness of the many universes making up what is popularly known as 'outer space', the hypothesis that other-world systems might exist is scientifically feasible.

In the light of modern scientific discoveries, we can appreciate the limitations of the human world. Today, science has demonstrated that our human world exists within the limitations of the vibrational frequencies that can be received by our sense organs. And science has also shown us that there are other vibrational frequencies which are above or below our range of reception. With the discovery of radio waves, X-rays, TV waves, and micro waves, we can appreciate the extremely limited vision that is imposed on us by our sense organs. We peep out at the universe through the 'crack' allowed by our sense organs, just as a little child peeps out through the crack in the door. This awareness of our limited perception demonstrates to us the possibility that other world systems may exist that are separate from ours or that interpenetrate with ours.

As to the nature of the universe, the Buddha said that the beginning and ending of the universe is inconceivable. Buddhists do not believe that the world will suddenly end in complete and utter destruction. There is no such thing as complete destruction of the whole universe at once. When a certain section of the universe disappears, another section remains. When the other section disappears, another section reappears or evolves out of the dispersed matters of the previous universe. This is formed by the accumulation of molecules, basic elements, gas and numerous energies, a combination supported by cosmic impulsion and gravity. Then some other new world systems appear and exist for sometime. This is the nature of the cosmic energies. This is why the Buddha says that the beginning and the end of the universe is inconceivable.

It was only on certain, special occasions, that the Buddha commented on the nature and composition of the universe. When he spoke, He had to address Himself to the understanding capacity of the inquirer. The Buddha was not interested in this kind of metaphysical speculation that did not lead to the higher spiritual development.

Buddhists do not share the view held by some people that the world will be destroyed by a god, when there are more non-believers and more corruptions taking place amongst the human beings. With regard to this belief people can ask, instead of destroying with his power, why can't this god used the same power to influence people to become believers and to wipe out al immoral practices from men's mind? Whether the god destroys or not, it is natural that one day there will be an end to everything that comes into existence. However, in the language of the Buddha, the world is nothing more than the combination, existence, disappearance, and recombination of mind and matter(nama-rupa).

In the final analysis, the Teaching of the Buddha goes beyond the discoveries of modern science however startling or impressive they may be. In science, the knowledge of the universe is to enable man to master it for his material comfort and personal safety. But the Buddha teaches that no amount of factual knowledge will ultimately free man from the pain of existence. He must strive alone and diligently until he arrives at a true understanding of his own nature and of the changeable nature of the cosmos. To be truly free a man must seek to tame his min, to destroy his craving for sensual pleasure. When a man truly understands that the universe he is trying to conquer is impermanent, he will see himself as Don Quixote fighting windmills. With this Right View of himself he will spend his time and energy conquering his mind and destroying his illusion of self without wasting his effort on unimportant and unnecessary issues.

Posted by Decoding Hinduism Pradeep Singh at 11:18:00 AM No comments: