MIND BOGGLING NEW EVIDENCE: Indian Hindu Links of AUSTRALIA !!! Hinduism is the Mother of all Civilisation and Cultures _/\_
Australian Aboriginal and Dingo Mystery
Proved Indian Hindu Links
of all civilization.
Australia holds some of modern humans’ earliest archeological evidence, with relics dating back to about 45,000 years ago. In other words, Australian aboriginals are the oldest continuous population of humans on the planet. Shares very strong bond with Ancient Hindus and their traditions .well before Europeans could even dream of exploring the far-off continent 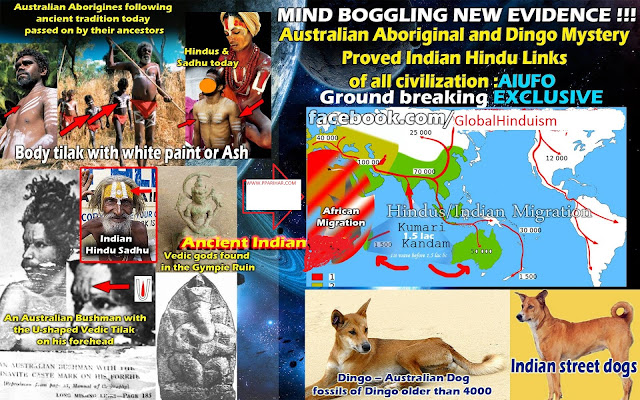 Before you dig deep in to this part of case study u must understand the step motherly treatment given by this western scientist who always attempt to diminish Hindu's proud history of mankind as much as possible.
First they started with "Hindus have no culture " Later " Aryan Invasion Theory" Now " Hindu prayed Aliens"

:P . These racist scientists even tried to tamper our history with "First humans came from africa theory" As many Africans genetically look closer to chimps. These are utterly a propaganda. Indian civilizations and our ancient Hindus don't share any link All these propaganda is to twist our history as many civilizations from America to Australia have strong connections with Indian DNA and our culture.
So they created this theory that Africans migrated into Indian subcontinent then from there into other parts !!! Another desperate attempt.
. Slowly but steadily when science get advanced these western experts are finding it very hard to botch up the facts and new evidence. But I always said: West can fake/alter our history but cant change it !!!
1) Dr Raghavendra Rao from the Anthropological Survey of India, says that DNA evidence linking Indian tribes to Australian Aboriginal people points to the fact that humans arrived in Australia via a southern coastal route through India. His team used computer programs to predict that a common ancestor existed, between the Indian population and Aboriginal Australians, up to 50,000 years ago.
The Uru megalithic sites of Australia date back to between 30,000 and 50,000 years, with extensive sites in the central west of NSW. The Sun is the most common symbol that is seen in the Megaliths erected by the Uru of Australia.
The Uruans worshipped the Sky-Father and Mother Earth.These are concepts linked to the Vedic India. In India, the 'World-Mother' is worshipped as Goddess 'Jagadambika' (जगदम्बिका). The 'Sky-Father' in Sanskrit is 'Jagatpati' (जगत्पति) which is 'Vishnu'. Jagatpati is also another word for the Sun as per the Vedic tradition.
With this as the background lets apply Sanskrit to decipher the word 'Uru'- the name by which this civilization came to be known. In Sanskrit 'Uru' (उरु) means 'Earth'. This may be a reference to the 'Earth-Mother' of the Uruan culture.
However, in the megalithic sites of Australia, it is the Sun that takes prominence and is the most common and recurring symbol. In Sanskrit 'Aru' (अरु) means the 'Sun'. And the name Australia may be derived from 'Aru'.
The entire word Australia can be decoded if we apply Sanskrit. 'Arus' (अरुस्) means the 'Sun', 'Taral' (तरल) means liquid which may refer to the coastal route which the Indians took to arrive into Australia and the fact that the entire continent is surrounded by water - a logic similar to why Australia and New Zealand together are referred to as Oceania. 'Alaya' (आलय) means 'home' or a 'retreat'.
And here is something from the Gympie Times, Australia dated 30th October 1975.
A Granite Hindu God Ganesha
Artifact found in Dogun, Australia
"At Dogun, schoolboy Cliff Brown, 13, found an elephant about 100mm high carved from beige granite. It is thought to be the Hindu God Ganesha." - The Gympie Times.
A statue found in the Gympie Ruins area
The 'Padma_Asana' Posture is the same as
Indian Vedic Goddess
Courtesy: http://www.stradbrokeislandgalleon.com/index.html
And now a report from BBC News, dated 14th January 2013 quotes a genetic research study which has concluded that Australia experienced a wave of migration from India about 4,000 years ago. It also says that a Genome-wide data substantiates that the Holocene gene flowed from India to Australia.*
An Australian Bushman with
the U-shaped Vedic Tilak on his forehead
In his book, 'Oriental Fragments' Edward Moor made the following observation in 1854, "In the vast spread of Australia, for instance, we might expect to find ... traces and remains of Sanskrit, and temples and images and various Hinduisms - evincing indeed, the existence there, at no very distant period, of a magnificent Hindu empire..."
2) The Dingo Mystery and the Indian link of Australian Aborigines :
Before you dig deep into this part of case study u must understand the step motherly treatment given by this western scientist who always attempts to diminish Hindu's proud history of mankind as much as possible. First, they started with "Hindus have no culture " Later " Aryan Invasion Theory" Now " Hindu prayed Aliens"

:P . These racist scientists even tried to tamper our history with "First humans came from Africa theory" As many Africans genetically look closer to chimps. These are utterly a propaganda. Indian civilizations and our ancient Hindus don't share any link. All these propaganda is to twist our history as many civilizations from America to Australia have strong connections with Indian DNA and our culture. So they created this theory than Africans migrated into Indian subcontinent then from there into other parts !!! Another desperate attempt.
. Slowly but steadily when science get advanced these western experts are finding it very hard to botch up the facts and new evidence. But i always said: West can fake/alter our history but can't change it !!!
Below are the findings by these western scientists. Again they tried to play it down by saying 4000 years ago ie,. 2000 BCE only but we all know our Hindu empire was a Naval super power and controlled a vast area of the world's territory even before any of these western civilizations came into existence. Let it be Truth will expose them sooner or Later !!! I tried my best to put all these infos in one single cover picture.
The Dingo Mystery
The dog in the below photo may look familiar to Indians as it closely resembles the free roaming dogs found in India. But this is Dingo, a dog species found in Australia and is also Australia’s largest terrestrial predator. Recent genetic studies of Australian Aborigines have revealed the missing link between Ancient India, Dingo and the natives of Australia. This study also negates the popular belief that Europeans were the first outsiders to arrive on the Australian soil. On the contrary, these studies reveal that ancient Indians were the first outsiders to arrive on the Australian Soil 4000 years ago, to be exact some 4,230 years ago.
The Dingo Mystery was that the oldest known fossil of this dog species in Australia dates back to 4000 years. There are no fossils of Dingo older than 4000 years found anywhere in Australia. So it was as if this dog suddenly arrived on the Australian landscape 4000 years ago. If so, then who brought it and from where? was the question.
The Mystery of the Archaeological Records in Australia
The archaeological records of Australia also indicated that there was a sudden change in the lives of the Australian natives 4000 years ago with improved agricultural practices and plant processing techniques (to remove toxins from edible plants), and new stone tools had arrived suddenly in Australia at around the same time. So from whom did the native Australian Aborigines learn all these new techniques 4000 years ago?

The Genetic Study of the Australian Aborigines
Now a Genetic study conducted by the researchers at the Max Planck Institute for Evolutionary Anthropology in Leipzig, Germany has reported evidence of substantial gene flow from India into Australia dating back to about 4,000 years ago. The timing or dating of this gene flow matches so well with the earlier explained mysteries that now it is clear that Ancient Indians had arrived on the Australian soil 4000 years ago, bringing with them the Dingo. They also taught the native Australians the new agriculture techniques, plant processing, and stone tools creation. Read this news item Indians broke Australian isolation 4,000 years ago and a more detailed report Must be Indian: Human Settlement in Australia
This also explains the other so far unexplained mystery of the huge expansion of a new Aboriginal language group in Australia at around the same time i.e. some 4000 years back.
Ancient Indians, not modern Europeans were the first outsiders to enter Australia
Till now it was widely believed that Europeans who first arrived in Australia at the end of the 1700s were the first outsiders to enter Australia. But this new genetic study has now revealed that the ancient Indians were the first outsiders to set foot on the Australian soil 4000 years back. More importantly, this migration is supposed to have happened from southern India, the present Dravidian speaking population of India.
Why did it take so long for a proper genetic study to be conducted on the Aborigines of Australia? Researcher Mark Stoneking says that the Aboriginal Australians have been hesitant to participate in these kinds of genetic studies, and were suspicious about the intention of such studies till recently.
Another important point to be noted is also the fact that the native Australians themselves arrived to Australia some 50,000 years back from India. The current theory of human origin and expansion, called the “Out of Africa” theory says that humans originated in Africa, and from there migrated to India, and from India spread to the rest of the world. So every non-African human being has his ancestral roots in India.
Hinduism is the Mother of all Civilisation and Cultures
Posted by Decoding Hinduism Decoding Hinduism at 12:30:00 PM

Email ThisBlogThis!Share to TwitterShare to FacebookShare to Pinterest
Labels: australia and its hindu past, hindu australia, hinduism in australia