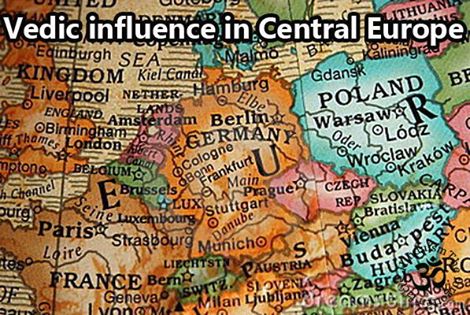 The Saxena of India, Saxons of Europe and Anglo-Saxons of Britain are part of the same stock. Consequently the term Czechoslovakia is Sanskrit of Shakaslavakiya. Slavak is another ancient sub-clan.
• The Slav language also has many similarities with Sanskrit. Like agni (fire), Malka (meaning mallika) meaning mother, sestra is sister, brat is brother, syn is son, nos is nose, dam (dham) is house. Many of the personal names are also Sanskrit such as Sudhakant, Asha, Meenakshi and Ramkali.
In Scopte, a city in Yugoslavia there live over 50,000 Ramas, or families with names referring to Vedic connections.
• Slavak festival falling in January 13/14, known in Punjab of North India as Lodi and also as Sankranti, is almost the same as the "Loda" of Slavs.
Slavs celebrate the end of winter in the spring by building a bonfire. Peasants dance and sing songs to Loda, the goddess of spring and festivity.
The Christians have since changed the name to Butter Week. This is another indication of how the Christians have tried to place their identity on age old Vedic festivals to make them look deceptively Christian. Mr. Oak says The Slavs were forced into Christianity and to abandon Vedic culture in the 9th century. "For a long time Christianity suffered to exist. However, Vladimir, the Charemagne of Russia (who became king in 980 A.D.) proclaimed Christianity as the state religion by himself toppling a statue of the Vedic deity Varun, alias Parun. Then all Temples and Schools were turned to Christian Churches and monasteries. And Vladimir was changed to Wassily on being baptised.
• Hungary was shringeri, implying Scenic. Just like in Sindhu and Hindu the "S" and "H" is interchanged.
• Budapest was Buddhaprastha, meaning holy city of Buddha.
• In Bulgaria we find the dictionary replete with Sanskrit words. When the Indian Embassy, Bulgaria, informed Bulgarian government of this, they promptly set up courses in Sanskrit in numerous schools. During the Indian film festival organised in Bulgaria it was found that the audiences could easily understand Sanskrit words in the dialogue.
Posted by Decoding Hinduism Pradeep Singh at 4:51:00 PM No comments: