Planets dimension and location per Bhagvatgita 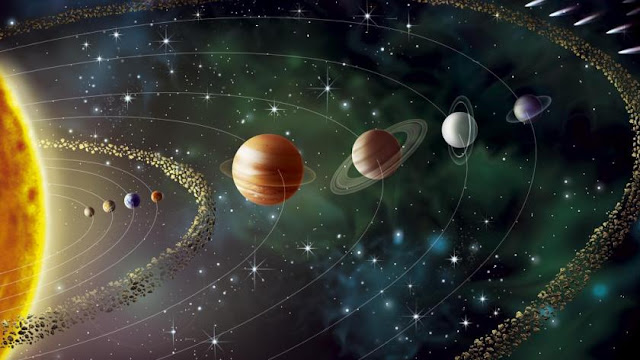 Bhagavata Purana, composed around >35000 years ago, describes in detail, Stars, planets in our solar system, Sun, their dimensions, distances between them, climatic and karmic effects of their movement.

sa eṣa bhagavān ādi-puruṣa eva sākṣān nārāyaṇo lokānāṁ svastaya ātmānaṁ trayīmayaṁ karma-viśuddhi-nimittaṁ kavibhir api ca vedena vijijñāsyamāno dvādaśadhā vibhajya ṣaṭsu vasantādiṣv ṛtuṣu yathopa-joṣam ṛtu-guṇān vidadhāti.Translation : Original cause of the cosmic manifestation is the Supreme Personality of Godhead, Nārāyaṇa. When great saintly persons, fully aware of the Vedic knowledge, offered prayers to the Supreme Person, He descended to this material world in the form of the sun to benefit all the planets and purify fruitive activities. He divided Himself into twelve parts and created seasonal forms, beginning with spring. In this way He created the seasonal qualities, such as heat, cold and so on.

Translation : Śrī Śukadeva Gosvāmī clearly answered: When a potter’s wheel is moving and small ants located on that big wheel are moving with it, one can see that their motion is different from that of the wheel because they appear sometimes on one part of the wheel and sometimes on another. Similarly, the signs and constellations, with Sumeru and Dhruvaloka on their right, move with the wheel of time, and the antlike sun and other planets move with them. The sun and planets, however, are seen in different signs and constellations at different times. This indicates that their motion is different from that of the zodiac and the wheel of time itself.
The time that the passage of the sun takes moving through both the spheres above and below, speeding slow, fast or moderate, is in the descriptions of the scholars discussed as a samvatsara [a solar year], a parivatsara [one twelfth of a revolution of Jupiter], an idâvatsara [a day of the gods consisting of 360 solar days] an anuvatsara [a lunar year comprising twelve lunations] and a vatsara [a year to the ecliptic in terms of the 27 lunar mansions or nakshatras.

Translation : Sun lit Moon, who is placed a hundred thousand yojanas [astronomy: ± 385.000 km] above [the earth] and is moving much faster [than the sun], is so the passage of one year of the sun covered by the passage of two fortnights, is in two and a quarter of a day one solar month [or one twelfth of the sky] passed and is in only one day [the portion of] a fortnight of solar days passed.
(Modern astronauts estimated distance between Earth and Moon to be 384,400 km)

Translation : [More than] two hundred thousand yojanas behind [the moon], leaving Meru to the right are there, together with the many stars by the Controller attached to the wheel of time, the twenty-eight stars headed by Abhijit (Vega).

Translation : At a distance of two hundred thousand yojanas there about [about the star center or the sun; astronomy: at a distance of 107 million km] there is Us’anâ [Venus], the planet that can be seen going in front, behind and rotating along with the sun just as fast, slow or with a moderate speed. It is of all the planets the one considered to exert as good as always a favorable influence in the form of rainfall, it by its movements neutralizes the influence of planets that obstruct rainfall.

Translation : Another two hundred thousand yoyana’s behind Venus [astronomy: 57.9 million miles from the sun], so is explained, is there situated Mercury, the son of the moon; he is as good as always working auspiciously, but at the time he stands apart from the sun is there almost always an increase of fearful conditions like draughts, a closed sky, and stormy conditions.

Translation : Two hundred thousands yojanas outside of our orbit there is also Mars [astronomy: at about 228 million km from the sun]; in three by three fortnights does he, if he doesn’t make a curve, one after another pass through the twelve signs and in his approach he is as good as always an unfavorable planet giving trouble.

Translation : Two hundred thousand yojanas outside of Mars [astronomy: 778.3 million km from the sun] is there the most powerful planet Jupiter who, if he doesn’t run a curve, takes a year [parivatsara] to one after another move through one sign; to the brahmins in the universe he almost always turns out to be very favorable.

Translation : Two hundred thousand yojanas behind him is situated Saturn [astronomy: 1.43 billion km from the sun], who takes a period of thirty months to travel through each single sign and for sure is as slow as taking an equal number of years [anuvatsara’s] to pass through all of them; he indeed means almost always a lot of trouble to all.

Translation : 1.1 million yojanas beyond that one are situated all the great sages who verily always think of the good fortune of the inhabitants of all the worlds; leaving it to the right do they circumambulate the transcendental abode of the Supreme Lord Vishnu [the center of the stars]

The Distances to the Planets -Higher Realms

Email ThisBlogThis!Share to TwitterShare to FacebookShare to Pinterest
Labels: LOKAS, orbits of planets per sribhagvatam, SRIMAD -BHAGVAT PURAN, The Distances to the Planets -Higher Realms

Orbits of Planets per Sribhagvatam

The Orbits of the Planets
Srimad Bhagavatam Canto 5 Chapter 22: ‘The Orbits of the Planets’ text 1 to text 17 by His Divine Grace A.C Bhaktivedanta Swami Prabhupada
In this chapter the orbits of the planets are described. According to the movements of the moon and other planets, all the inhabitants of the universe are prone to auspicious and inauspicious situations. This is referred to as the influence of the stars.
The sun-god, who controls the affairs of the entire universe, especially in regard to heat, light, seasonal changes and so on, is considered an expansion of Nārāyaṇa. He represents the three Vedas — Ṛg, Yajur and Sāma — and therefore he is known as Trayīmaya, the form of Lord Nārāyaṇa.
Sometimes the sun-god is also called Sūrya Nārāyaṇa. The sun-god has expanded himself in twelve divisions, and thus he controls the six seasonal changes and causes winter, summer, rain and so on.
Yogīs and karmīs following the varṇāśrama institution, who practice haṭha or aṣṭāṅga-yoga or who perform agnihotra sacrifices, worship Sūrya Nārāyaṇa for their own benefit. The demigod Sūrya is always in touch with the Supreme Personality of Godhead, Nārāyaṇa.
Residing in outer space, which is in the middle of the universe, between Bhūloka and Bhuvarloka, the sun rotates through the time circle of the zodiac, represented by twelve rāśis, or signs, and assumes different names according to the sign he is in.
For the moon, every month is divided into two fortnights. Similarly, according to solar calculations, a month is equal to the time the sun spends in one constellation; two months constitute one season, and there are twelve months in a year.
The entire area of the sky is divided into two halves, each representing an ayana, the course traversed by the sun within a period of six months. The sun travels sometimes slowly, sometimes swiftly and sometimes at a moderate speed. In this way it travels within the three worlds, consisting of the heavenly planets, the earthly planets and outer space. These orbits are referred to by great learned scholars by the names Saṁvatsara, Parivatsara, Iḍāvatsara, Anuvatsara and Vatsara.
The moon is situated 100,000 yojanas above the rays of the sunshine. Day and night on the heavenly planets and Pitṛloka are calculated according to its waning and waxing. Above the moon by a distance of 200,000 yojanas are some stars, and above these stars is Śukra-graha (Venus), whose influence is always auspicious for the inhabitants of the entire universe.
Above Śukra-graha by 200,000 yojanas is Budha-graha (Mercury), whose influence is sometimes auspicious and sometimes inauspicious. Next, above Budha-graha by 200,000 yojanas, is Aṅgāraka (Mars), which almost always has an unfavorable influence.
Above Aṅgāraka by another 200,000 yojanas is the planet called Bṛhaspati-graha (Jupiter), which is always very favorable for qualified brāhmaṇas. Above Bṛhaspati-graha is the planet Śanaiścara (Saturn), which is very inauspicious, and above Saturn is a group of seven stars occupied by great saintly persons who are always thinking of the welfare of the entire universe. These seven stars circumambulate Dhruvaloka, which is the residence of Lord Viṣṇu within this universe.
SB 5.22.1
Translation:
King Parīkṣit inquired from Śukadeva Gosvāmī: My dear lord, you have already affirmed the truth that the supremely powerful sun-god travels around Dhruvaloka with both Dhruvaloka and Mount Sumeru on his right. Yet at the same time the sun-god faces the signs of the zodiac and keeps Sumeru and Dhruvaloka on his left. How can we reasonably accept that the sun-god proceeds with Sumeru and Dhruvaloka on both his left and right simultaneously?
SB 5.22.2