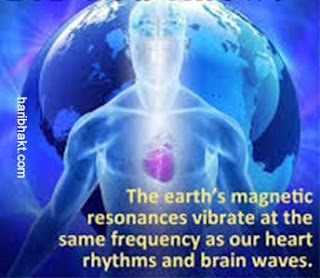 Brain Waves Theory of Bhagavad Gita’s Consciousness and Vedas.
The most scientific truth taught to the world by Hindu texts, Vedas are the sacred sounds and Vibrations that control everything within and beyond Vacuum. Universal creation and destruction revolves around sacred sound ओ३म् (ॐ). The Earth, the Moon and the Sun are moving and protecting all living things with a natural frequency pulsation of 7.83 HZ — The frequency is known as ओ३म् (ॐ) OM.
Our life and the surrounding around depends on two subtle environmental signals, the Yin from below and the Yang from above.
The Schumann wave surrounding our planet being YANG and the weaker geomagnetic waves coming from below, from within the planet, being the YIN signal. 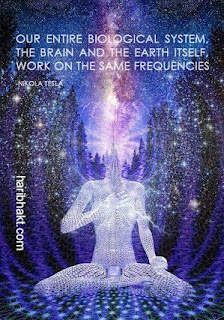 The equilibrium of earth and revolvement of planets is maintained by Sacred sounds as mentioned in Hindu texts.
Our brain’s ability to become flexible and/or transition through various brain wave frequencies plays a large role in how successful we are at managing stress, focusing on tasks, and getting a good night’s sleep. If one of the five types of brain waves is either overproduced and/or under produced in our brain, it can cause problems. For this reason, it is important to understand that there is no single brain wave that is “better” or more “optimal” than the others.
Our brain waves get in sync with the waves of planets in deep yogic meditation.
It happens when alpha and theta waves are perfectly balanced w.r.t other waves across the entire brain, a communication is possible between the human being and the planet – connection is developed. Energy and information which are embedded in the Sunya or Zero point (Aether ) is shared with the human brain. The planet communicates with us in this primal language of frequencies. The communication happens through the divine sound language that transcends through inter-dimensions and exists everywhere
What the Invaders Missed and Never Knew
No invader or attacker can ever win over India or its local natives (Hindus). No one can ever destroy its culture. There is always the supreme Bhagwan protecting the Bharat Varsha (Divine India) and Sanatan Dharma. 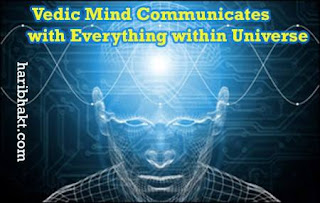 Ancient and modern Hindus (now Sages) are fully aware of communicating through (biological medium) mind and body with consciousness of the Universe
When sea mapping was done by Hindus of Bharat (now India), westerners flocked to the country to study the local civilization and truth about prosperity of native Indians (Hindus). Most of them were interested in looting the country, robbing off the wealth of erstwhile prosperous Hindu Rashtra, Bharat. There were very few seekers from West who came to India to realize the truth of existence and life. Once they somehow comprehended nuances of Hindu texts at surfacial level, they started renouncing their western traits of meat-eating and drinking. They made India their first and last home, never going back to the West. Hardly some of them became global ambassadors of Vedic wisdom. They were more of the view in finding solace for themselves than spreading knowledge of true human values. Some may call them selfish but that’s how they led their lives. Until the turn of the 19th Century, the Western view of the Hindu religion was mostly identified with a dazzling array of cultural mosaic and mysticism of India filled with both imaginable and unimaginable. It began to change after Swami Vivekananda gave his famous speech on the teachings of the Vedanta in Chicago in 1900 during the gathering of the World Parliament of Religions.
The loot and killings done by Muslims and Britishers led to decimation of their strength and ever-ending misery for the community people ever after. The Karmic cause and effect undid the prosperity and well-being of attackers.
If the invaders had instead embraced the Vedic knowledge with humility they would have made the world a peaceful placeTeachings of Srimad Bhagavad Gita and Contribution to Modern Science
The true teaching of the Vedanta contained in the Gita, Vivekananda told his mesmerized Western audience, has very little to do with the flying sadhus, the endless Hindul rituals, and the caste-system.
Citing the Gita, he voiced his opposition to organized religion, priestly control of spirituality, and then he also informed us of the existence of the female Rishis (Vedic teachers) in the Vedanta. Over night, Vivekananda introduced to the West the true liberated teaching of the Gita: pursue the beauty of inner Self through the art of detachment and meditation, and harvest the bounty of spiritual fountain. Half a century later, it was a nuclear physicist J. Robert Oppenheimer who finally brought the Gita into the popular vocabulary of the scientists in the West by citing this quote from the Bhagavad Gita. 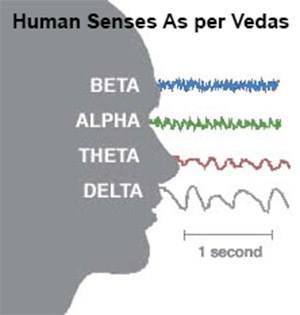 “If the radiance of a thousand suns were to burst at once into the sky, that would be like the splendor of the mighty one.” and “Now I am become Death, the destroyer of worlds.” [July 16, 1945, inscription at first nuclear test site Trinity, New Mexico]
With this began a western love affair with the wonderful tradition of the Vedic philosophy and the Gita. Since then, many scientists have quoted the Gita. For example, famous astro-physicist Carl Sagan was awed by the revelation in the Gita that the creation and destruction, an essential part of the cosmic evolution, was actually postulated in a more realistic vast time scale [8.17-8.19]
“The Hindu Dharma is the only one of the world’s great faith dedicated to the idea that the cosmos itself undergoes an immense, indeed an infinite number of deaths and rebirths. It is the world’s only religion in which the time scales correspond to those of modern scientific cosmology. Its cycles run from our ordinary day and night to a day and night of Brahma, 8.64 billion years long, longer than the age of the Earth or the sun and about half the time since the Big Bang.” Cosmos (New York: Random House, 1980). 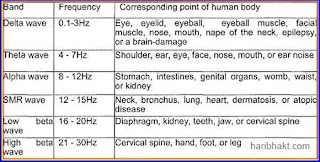 Body parts and Brain Waves
Meditation, yoga, and the idea of spiritual living have now become an accepted part of the mainstream society. These popular phenomena have also begun to come under objective scrutiny. As the science discovers the power of spirituality through various scientific tests, the essence of the Gita becomes ever more relevant to our modern society. The simple idea of meditation discovered five to six thousand years ago in the Rigveda (oldest of the four Vedas), and a preferred choice of the true knowledge seekers, has been scientifically shown to have power to alter brain waves. Experiments have also shown that meditation reduces criminal intent, stress, and anger, and helps with recovery from illness.
Based on the teachings of Gita, some scientists have been doing experiment by placing electronic devices around the world to detect the existence of concentrated brain wave. They were baffled by an unusual level of concentrated signal picked up by their detectors during the time of the 9/11 incident, Madrid bombing and the similar global catastrophes. A global attention on a single event like the 9/11 seems to have some sort of abnormal effect.
haribhakt.com
Posted by Decoding Hinduism Pradeep Singh at 7:14:00 PM No comments: