Mayan City Yaxchilan is an ancient city located on the bank of the Usumacinta River in Chipas, Mexico.
Epigraphers think that the ancient name for the city was probably the same as that of its’ realm, Pa’ Chan, meaning “Cleft (or broken) Sky“.
The lintels of Yaxchilan Temples are decorated with carvings that can be connected to carvings ofYakshas in India.
In Sanskrit PaShan (पाषण) also means stone and this could be distorted as Pa’Chan.
In Ancient India, Yakshas(यक्ष) are a class of benevolent spirits or super-natural guards who are the custodians of treasures that are hidden in the earth and in the roots of trees.
Kubera (lord of wealth) was leader of Yakshas, who left Lanka to his cousin brother Raavan and migrated to other place.
Maya, who built mystical and phenomenal structures for Yakshas and Asuras was also a Yaksha and we can related him as origin of Mayan civilization, that thrived in mexico and south america.

Sila (शिला) means stone or stone-sculpture or stone plate in sanskrit.
Yaksha-Sila (यक्षशिला) are the Yaksha’s stone-lintels in Mexico and thus the name Yaxchilan (distorted version of Yaksha-Sila).
Yakshas are mentioned in Hindu, Buddhist and Jain traditions.
In Indian art, male yakṣhas are portrayed either as fearsome warriors or as portly, stout and dwarf-like. Female yakṣhas, known as yakṣhiṇīs, are portrayed as beautiful young women with happy round faces and full breasts and hips.

Yakshas (Thai: ยักษ์, Yak) are an important element in Thai temple art and architecture, as they are the guardians of all Buddhist temple gates.
Yakshas and their female counterparts are common in the Buddhist literature of Thailand. As ogres, giants and ogresses yakshas are popular as well in Thai folklore.

Jains mainly worship idols of Arihants and Tirthankaras, who have conquered the inner passions and attained God-consciousness status. Some Jains also believe that Yaksha and Yakshini look after the well-being of Tirthankaras. Usually, they are found in pair around the idols of Jinas as male (yaksha) and female (yakshini) guardian deities. Yaksha is generally on the right-hand side of the Jina idol and Yakshini on the left-hand side. In earlier periods, they were regarded mainly as devotees of Jina, and have supernatural powers. They are also wandering through the cycles of births and deaths just like the worldly souls, but have supernatural powers. Over time, people started worshiping these deities as well.
Some Yaksa were and are known for bestowing fertility and wealth upon their devotes. Therefore, they had become very popular and their idols had been placed in Jain temples and Jains worship them. Jains offer them different things in favor of boons for children, wealth or freedom from fears, illness or disease.
Since ancient times, Yaksha-Gaana (Song of the Yakshas), the musical presentation of the Yaksha folklore, which is equivalent to the popularity of the Opera in the West, famous in India.
Mahabharata mentions an episode where one Yaksha captures 4 brothers of Yudhishtira and asks Yaksha-Prasnas (Yaksha’s questions). Yudhishtira answers all of them to prove his worth as future king and gets is brothers released.
citation-booksfact.com
Posted by Decoding Hinduism Pradeep Singh at 8:49:00 PM No comments: 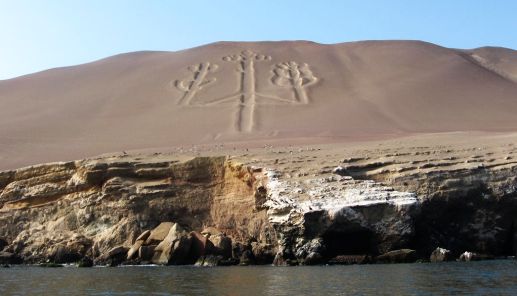 Vanara king Sugreeva describes to team that traveled towards east, that first they will have to cross sea and would landup in Yava(Java) island.
Then would would cross another island and reach a sea with red/yellow water (coral sea of australia).
Then they would see the pyramid (today’s Gympie Pyramid near west coast of Australia).
Through Sugreeva, writer Valmiki further describes that after crossing this huge island (Shalmali Dwipa/Austalia), they would see Mount Rishabha (ऋषभ) which looks like a ‘White cloud with a pearly necklace of waves rippling on the shores below‘. 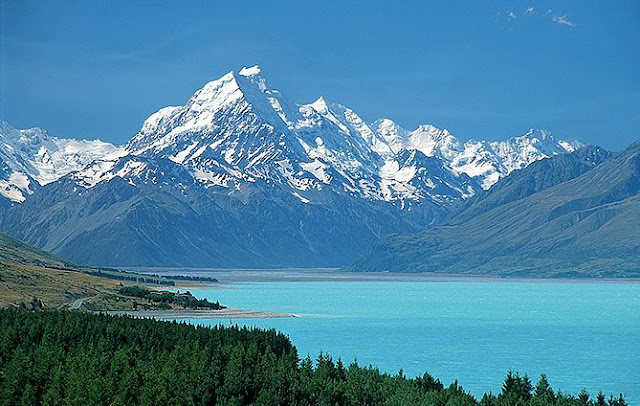 Near to that, they would spot the Sudharshana Lake with ‘silvery lotuses which have fibrils of gold‘ and where ‘kingly swans scamper around‘.
Valmiki could be referring to Mount Cook & Lake Pukaki of New Zealand, which match these descriptions.
Sanskrit meaning of ‘Sudarshan‘ (सुदर्शन) is ‘beautiful to look at‘.
Valmiki says that after crossing the island with these lakes, swans and beautiful mountains, one will have to cross a soft-water ocean which will be frightening to all beings.
There exists a fantastically refulgent Fire in the form of Horse’s Face that originated from the anger of Sage Aurasa. The victuals to that Fire is said to be that highly speedy waves of the ocean, together with all of the mobile and sessile beings of the world at the close of each Era. [Ramayana 4-40-48]
Ring of Fire is where a large number of volcanic eruptions occur in the basin of the Pacific Ocean. In the next verse Valmiki describes the magnitude of this ‘fantastic fire‘, that at the end of each epoch (Yuga) or era, that fire emerges forth with even more energy till all things, mobile or immobile, and the entire Creation becomes the fuel of this fire. 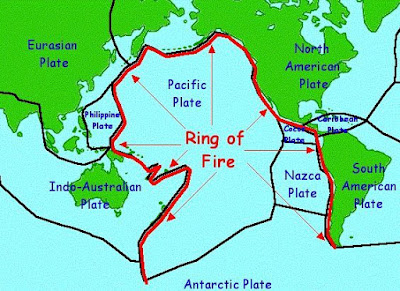 Valmiki must be referring to the ‘Pacific Ring of Fire‘ as its in between these Australia-New Zealand and South America.
Also the ‘Soft‘ ocean is the ‘Pacific‘ and Ferdinand Magellan in 1521 must have named it as Mar Pacifico in Portuguese, meaning ‘peaceful sea‘, as he saw the waters still with favorable winds to sail.
Sugreevas further describes that after crossing this ocean, one would see Udaya Adri (उदय अद्रि) (‘Udaya’ = ‘Sunrise’ & ‘Aadri’ = ‘Mountain’) .
According to him, day breaks on earth in the Udayaadri.
Today, we consider Japan as the ‘Land of Rising Sun‘. But infact, at every geographical point on earth, darkness will fade away and day will break at a certain point of time on every day.
Why was ‘Udayaadri (Mount Sunrise)‘ chosen as eastern point and why not some other place ?
Ramayana’s Kishkinda Kanda, verses 4-40-57 & 4-40-58 give reasons why this point is chosen.

Translation : On the apex of that Mt. Sunrise there is another pinnacle with one yojana width and ten yojana-s height named Saumanasa, which is completely golden and very firm.

Translation : Earlier while treading the three worlds in the incarnation of Trivikrama, the Supreme God Vishnu made His first foothold on that pinnacle Saumanasa, and the second on the pinnacle of Mt. Meru to tread the heavens.

Translation : The Sun is by far discernable in Jambu Dwiipa when he rises on this zenithal pinnacle Saumanasa, after he had circled the Jambu Dwiipa in a northerly route.
The sunrises in the East on the peak of this Saumanasa which is on the zenith of Udaya Mountain. Then he traverses above Jambu Dwipa, Indian Subcontinent, including South-East Asia, and sets in the West on the mountains called Astagiri, ‘ the Sunset Mountain.’
Then he courses northerly on the other side of the globe via Mt. Meru in heavens at the other side of Jambu Dwipa, only to rise again on this Mt. Sunrise.
As Jambu Dwipa, the subcontinent lies southerly to that heavenly Mt. Meru, and down East-South of Saumanasa, this subcontinent can happily see the First Sun, daily.
This gives raise to the Indian name of India, that is Bhaarata, bhaa rataH (Sun, delights)…’ The place where the Sun delights firstly, that is Bhaarat‘. 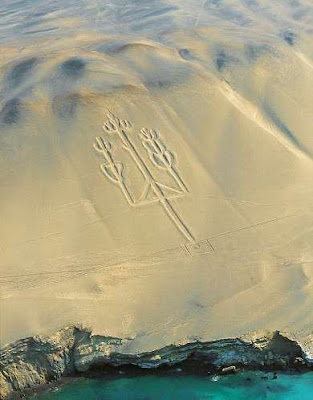 Andes could be a distorted version of ‘Adri’ over many years.
Sugreeva further says to Vanaras that, while reaching Udaya-Adri, they will see Jaat-Shila-Rupa (Golden Rock Peak), etched on which is a ‘golden pylon resembling a palm tree with three branches with a golden podium ‘.
Sugreev continues, “That pylon of palm tree is constructed as the easterly compass by celestial gods, beyond which lies the Udaya Adri.”

Translation : On the northern province of that soft-water ocean there is a hugely enormous mountain named Jaataruupa-shila (Golden Rock Mountain), which glitters like gold and which spreads across thirteen yojanas.

Translation : There you shall see then, oh, vanaras, the lotus-petal broad-eyed thousand-hooded serpent god in black clothing, namely Ananta, sitting on the top of that mountain and sustaining the earth on his head, who will be like moon in his brilliance and whom all beings hold in reverence.
In ancient Indian texts the southern tip of South America (Chile) is ‘the head of the serpent called Ananta’, on which the earth rests (see the Ring of Fire starting at tip of South America in above figure).

Translation : A golden pylon resembling a palm tree with three branches as its heads is established on the peak of that mountain as the insignia of that great-souled Ananta, and it will be lustrous with a golden podium.

Translation : That pylon of palm tree is constructed as the easterly compass by celestials gods, and beyond that a completely golden mountain is there, namely the august Udaya Mountain, the Mt. Sunrise, beyond which it is all west. The pinnacles of Mt. Sunrise will be touching heavens for their height is hundred yojana-s and that divine mountain greatly glitters for it is completely golden, and it is pedestalled with suchlike glittering mountains.
So, according to Ramayana, Peru is the land of the Rising Sun.

The Paracas Trident of Peru, is a geo-glyph in the Andes Mountains and is regarded in the native folklore as the ‘Lightening Rod‘ of God Viracocha, a pre-Incan Civilization God of Peru/Bolivia.
Interestingly, Viracocha was worshipped as god of the Sun and Storms and he carried thunderbolts in his hands.
Paracas could be a distorted version of sanskrit word ‘Prakash‘ (प्रकाश्) which means light, lustre or brightness.
Another word could be ‘parakash‘ (पराकाश) which means ‘distant view‘, as this trident could have served as a guiding beacon for ancient UFOs or ‘Vimanas’.
The Trident in Hinduism represents Creation, Maintenance and Destruction. It also represents Time – Past, Present and Future.
Virochana (Sanskrit: विरोचन), in Hindu mythology, was an asura, son of Prahlada (Sanskrit: प्रहलाद) and father of Bali.
Prahlada is son of Hiranyakasipu (who was killed by Vishnu as incarnation of Narasimha – Lion faced Human).
(This explains partially, why Nazca lines are treated as King Bali’s ancient Airport.
In the Atharva Veda Viochana was mentioned as the son of Prahlada.
According to the Chandogya Upanishad , Virochana and Indra (who is said to be carrying Vajrayudha, a thunderbolt weapon) went to Prajapati (Brahma, the creator) to learn about the atman (self) and lived there, practising brahmacharya (self control) for thirty-two years.
But at the end, he misunderstood Brahma’s teachings and preached the asuras (demons) to worship the sharira (body) as the atman.
Thus, asuras started adorning the body of a deceased with perfumes, garlands and ornaments.
Now, does this Virochana sound similar to Viracocha ? or is it Vishnu, or Indra who is Viracocha ?
Citation-WWW.Booksfact.com
Posted by Decoding Hinduism Pradeep Singh at 10:12:00 AM No comments: