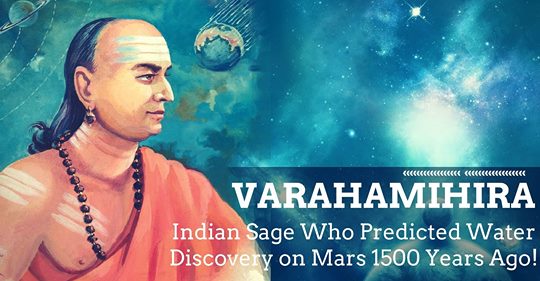 It’s intriguing to know that during NASA’s Mars mission, Arun Upadhyay, a retired IPS, did a comparative study of Varāhamihira’s calculations about Mars and found certain similarities.
Though the original book of Surya Siddhanta till date remains untraced, but somehow a few scholars had taken their notes for their own research work. Many fear that the original version was stolen by the other astronomers from overseas. The present version of Surya Siddhanta, which is often used by Panchang experts to predict festive dates and nakshatras, was modified by Bhaskaracharya during the Middle Ages.
It is learnt, Varahamihira humbly said about his own treatises: “The science of Astrology is a vast ocean and is not easy for everyone to cross it. My treatises provide a safe boat.”  Truly, even now they are acknowledged as masterpieces.
Source: FreePressJournal, Comets in ancient India, DailyBhaskar, Brihat Samhita of Varahamihira
Posted by Decoding Hinduism Pradeep Singh at 6:29:00 PM 4 comments: