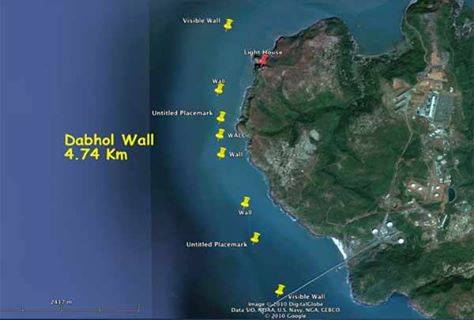 HINDU CIVIL ENGINEERING TECHNIQUES IN 8000BCE?
SHRIVARDHAN  SUBMERGED WALL ... IN OCEAN ... OFF RAIGAD COAST...... Sea coast has been coming back since last 26,000 years and this would be about the time this was on land ... This gives credence to the story of Lord Parashurama reclaiming land from sea ... Konkana was the place where Parashurama had finally settled after donating the whole land to Kashyapa. He had borrowed land from sea-in same manner as Dwaraka was below sea-level and some parts of Netherland now. Natural below sea level formation was in east Siberia. On hilly roads-lower wall to sustain the road is Retaining wall, upper wall to protect from falling rocks is called Breast wall. In under-sea level region, this is reverse. Sea facing wall is breast wall-called Okhotsky (=Vakshah) in east Siberia (Shibir is local name= tents, temporary shelters). Similar terms were used in Dwaraka which are now current in civil engineering. Sea facing wall was Okha (= Vaksha) ; now a port. Retaining wall is Dragandhra town (=Daharaam-dharaa). Probably, Oxus river in Pak occupied Kashmir had similar terms for hill roads. When Parashurama had constructed under sea level town, similar structures and names should exist. Parashurama had naval power also by which he had influence up to Kurd region of Iraq-Turkey. They are one of the 14 tribes which had supported Kamadhenu when Sahasrarjuna had attacked. So, the calendar after death was called Kalamba samvat. This is originally a term of solid geometry used in astronomy texts. In spherical polar coordinate system, this is top point like north pole in our maps/globe. Opposite point is Kalamba. Anchor of ship also s called Kalamba (= Column), as it goes down vertically. Persons engaged in shipping are Kalanja and their country is Kalinga. Their head is Kadamba (top point). Thus, the kings of shipping regions of Kalinga and Udupi were called Kadamba. Udupa is wooden boat, region using it was Udra (north Orissa) or Udupi (Malabar coast). Kalamba samvat started in 6177 BC-exactly 3100 years before the death of Yudhishthira in 3077 BC when Laukika era or Saptarshi era had started. Parashuram had destroyed Kshatriyas 21 times-Megasthenese has called it republic period of 120 years. Thus, each republic lasted for about 5 years each like present system. Prior to 21 republics, Parashurama must have been at least 35 years of age, so he lived up to at least 35+120 = 155 years-hence he has been called a Dirghajivi. Kalamba (Kollam) samvat start tallies with the archeological estimate of Konkana civilization era within experimental errors. There can be a theoretical error in radio carbon dating if there was a higher level of radioactivity as it was after Mahabharata period.HINDU
Posted by Decoding Hinduism Decoding Hinduism at 12:34:00 PM 3 comments: