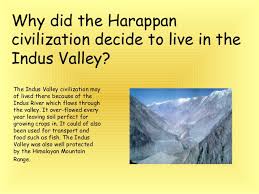 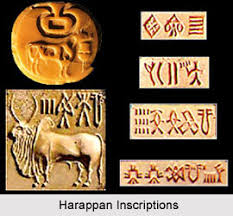 In any field it is important to take into account all the evidence, especially evidence of a fundamental nature. This can be illustrated with the help of what we now know about the Vedic river known as the Sarasvati. The Rigveda describes the Sarasvati as the greatest and the holiest of rivers — as ambitame, naditame, devitame (best of mothers, best of rivers, best goddess). Satellite photographs as well as field explorations by archaeologists, notably the great expedition led by the late V.S. Wakankar, have shown that a great river answering to the description of the Sarasvati in the Rigveda (flowing `from the mountains to the sea') did indeed exist thousands of years ago. After many vicissitudes due to tectonic and other changes, it dried up completely by 1900 BC. This raises a fundamental question: how could the Aryans who are supposed to have arrived in India only in 1500 BC, and composed their Vedic hymns c. 1200 BC, have described and extolled a river that had disappeared five hundred years earlier? In addition, numerous Harappan sites have been found along the course of the now dry Sarasvati, which further strengthens the Vedic-Harappan connection. As a result, the Indus (or Harappan) Civilisation is more properly called the Indus-Sarasvati Civilisation. 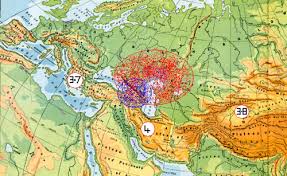 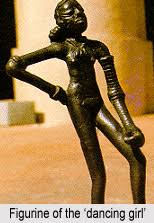 The basic point of all this: we cannot construct a theory focusing on a few relatively minor details like the spoke-wheel while ignoring important, even monumental evidence like the Sarasvati river and the oceanic symbolism that dominates the Rigveda. (This shows that the Vedic people could not have come from a land-locked region like Afghanistan or Central Asia). A historical theory, no less than a scientific theory, must take into account all available evidence. No less important, a man-made theory cannot take the place of primary evidence like the Sarasvati river or the oceanic descriptions in the Rigveda. This brings us back to Einstein — "A theory must not contradict empirical facts." Nor can it ignore primary evidence.

Email ThisBlogThis!Share to TwitterShare to FacebookShare to Pinterest
Labels: HARRAPA

The Harappan skull indicates,"trepanation"surgical practice done 4300 years ago in India.

Scientists at the Anthropological Survey of India claim to have found evidence of an ancient brain surgical practice on a Bronze Age Harappan skull.
The skull, believed to be around 4,300 years old, bears an incision that indicates an “unequivocal case” of a surgical practice known as trepanation, says a research paper published in the latest edition of Current Science. India is the place where plastic surgery was invented and Shushrut -Samhita was a surgical book describing many methods of surgery.
Trepanation, a common means of surgery practised in prehistoric societies starting with the Stone Age, involved drilling or cutting through the skull vault, often to treat head injury or to remove bone splinters or blood clots caused by a blow to the head.

While evidence of the practice has been found from regions in Peru, Europe and Bronze Age Jericho of Palestine, this is the first time the trepanation has been found in the Harappa civilisation.
According to the research paper, a trepanated hole was found in a Harappan male skull that had been kept in the Palaeoanthropology Repository of the Anthropological Survey of India in Kolkata.

In the case of the Harappa skull, the trepanation was intended as therapeutic as there is a clear indication of cranial trauma in the form of a visible linear depression, probably resulting from a severe blow, says the study by A.R. Sankhyan and G.R. Schug.
There is evidence too of healing, “indicating that the victim survived for a considerable time after the operation,” the paper adds. “Scholars have recorded striking similarities in trepanation techniques across the continents, and therefore consider it as important evidence for prehistoric movements of people and for transfer of surgical skills from one society to another,” the authors say.

A new study combining the latest archaeological evidence with state-of-the-art geoscience technologies provides evidence that climate change was a key ingredient in the collapse of the great Indus or Harappan Civilization almost >4000 years ago. The study also resolves a long-standing debate over the source and fate of the Sarasvati, the sacred river of Hindu.

Indus valley civilization spread >1 million square kilometers across Indus River from the Arabian Sea to the Ganges, over what is now Pakistan, northwest India and eastern Afghanistan, the Indus civilization was the largest—but least known—of the first great urban cultures that also included Egypt and Mesopotamia. Harappans, named for one of their largest cities,lived close to river for fertile soil.
Woods Hole Oceanographic Institution (WHOI) and lead author of the study published May 2012, in the Proceedings of the National Academy of Sciences, establishes SARASWATI RIVER  EXISTED ABOUT 4900 YRS AGO BEFORE IT WAS DRIED UP per satellite images.

"Until now, speculations abounded about the links between this mysterious ancient culture and its life-giving mighty rivers."
This complex culture in South Asia with a population that at its peak may have reached 10 percent of the world's inhabitants, was completely forgotten until 1920's.
The new study suggests that the decline in monsoon rains led to weakened river dynamics, and played a critical role both in the development and the collapse of the Harappan culture, which relied on river floods to fuel their agricultural surpluses.

The archaeological sites along the dried up Sarasvati River basin are represented by black dots.

From the new research, a vast picture of 10,000 years of changing landscapes emerges. Before the plain was massively settled, the wild and forceful Indus and its tributaries flowing from the Himalaya cut valleys into their own deposits and left high "interfluvial" stretches of land between them.

Among the most striking features the researchers identified is a mounded plain, 20 meters high, > 100 kilometers wide, and running almost 1000 kilometers along the Indus, called"Indus mega-ridge," built by the river as it purged itself of sediment along its course.
The mega-ridge is a surprising indicator of the stability of Indus plain landscape over the last four millennia.
Journal reference:Proceedings of the National Academy of Sciences

Posted by Decoding Hinduism Pradeep Singh at 9:08:00 AM No comments: