Now scientist are confused saying big bang never hapenned and Universe was forever, so there is no end and begining , infinite as Ancient India sages, scientists always say phys.org."The Big Bang singularity is the most serious problem of general relativity because the laws of physics appear to break down there," Ahmed Farag Ali at Benha University and the Zewail City of Science and Technology, both in Egypt, told Phys.org.Ali and coauthor Saurya Das at the University of Lethbridge in Alberta, Canada, have shown in a paper published in Physics Letters B that the Big Bang singularity can be resolved by their new model in which the universe has no beginning and no end. 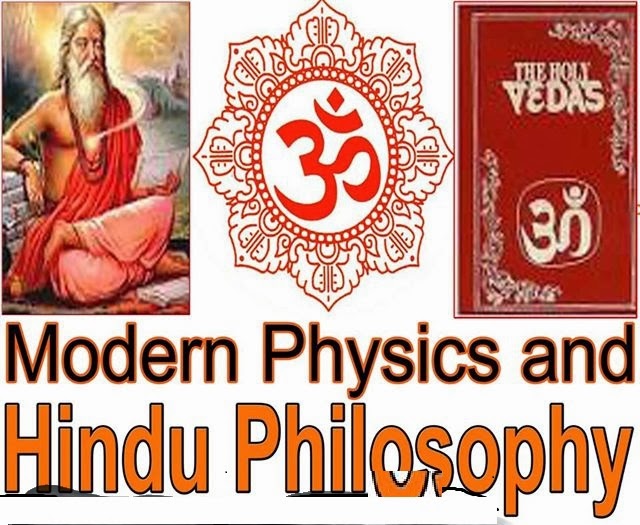 There are amazing similarities between implications of theories of modern physics and ancient Hindu philosophy as expressed in Vedas and Upanishads. The basis of Hindu philosophy is the mystical idea of Brahman. The Brahman is usually described by the words “Neti, Neti “meaning, not this, not this! When I went into study of physics, I realized that, as far as knowledge of ultimate reality is concerned, physicists are in exactly same situation as the ancient Rishis. Both cannot describe it in everyday language. In Mundak Upanishad, knowledge is divided into two parts: Para Vidya which deals with the eternal truth that can lead to self realization and Apara Vidya which deals with knowledge about material world. Under this classification, Physics might come under Apara Vidya. But, I would like to convince you that Modern Physics is also Para Vidya!

A number of early pioneers in quantum theory such as Bohr, Schrodinger, Heisenberg and later Bohm, were deeply influenced by eastern mystical ideas. A number of books have been written on this subject. Fritz Capra’s book in seventies on “The Tao of Physics” started the ball rolling. More recently, physicists Subhash Kak, Amit Goswami, John Hagelin (Maharshi Mahesh Yogi’s group) and some others have published extensively on this subject.

Now, I will describe briefly implications of some of the theories of modern physics for non-physicists. Physics which was discovered before the 20th century is known as classical physics which describes everyday physics like major parts of mechanics, heat, electricity-magnetism, optics etc which are used extensively in engineering and technology. At the beginning of 20th century, experimental data and certain inconsistency problems compelled physicists to accept two revolutionary theories: Quantum theory and Relativity theory. Physicists were forced to change their view of nature drastically as a result. Initially, there was immense reluctance to give up classical ideas. They were forced into quantum theory and relativity theory kicking and screaming. First of all, it was found that the world is not made out of rigid firm objects like billiard balls or bricks. At the atomic and sub-atomic level it consists of fuzzy wavelike objects and lot of empty space. So the solid nature of objects we see around is only apparent. As one goes deeper and deeper, one keeps on finding vacuum all the way. cosmology of hinduism is more advanced
This reminds one of the ideas of sunyata and Maya or illusion covering the whole universe, as Adi Shankaracharya said “Brahma Satyam, Jagat Mithya”. Brahman is the only truth; the world is a false illusion. Now, just like us, he must have seen solid bodies, rigid walls and trees. I believe he realized that all of this disintegrates and thus cannot be fundamental reality. Thus, because of the covering of Maya, one does not see the underlying real Brahman. (Previously, the concept of Maya from Mandukya Upanishad was emphasized by Shankaracharya’s spiritual grandfather Gaudapadacharya). Similarly, in physics, one sees only the material objects around and does not see strange quantum fuzzy world underlying all the matter. Moreover, the particles of modern physics are believed to be in some kind of suspended state devoid of any specific properties until they are measured. They are in some sense both here and there at the same time and are described by a wave function, a superposition of seemingly contradictory properties. Such a description is very similar to the description of Brahman e.g. in Ishopanishad: “It moves and it moves not; it is far and it is near; it is within all this and it is also outside all this.” Then the ultimate shock of quantum theory came when Bell’s theorem and subsequent experiments proved the so called entanglements to be right. In such cases, two or more atoms, electrons or photons demonstrate correlated properties even at distances where no communication is possible between them during the given time. These developments are the most important developments in the history of physics and perhaps in the whole of science. They give rise to the idea of the interconnected wholeness of the world and non-local interactions in contrast to the separate identities with local interactions. Thus atoms also exhibit holistic like properties and perhaps some primitive relationship to consciousness. So it is not proper to say that any analysis starting with atoms is reductionist and not holistic.
The four Mahavakyas express similar concept about individual and Brahman. Pragnanam Brahman - "Consciousness is Brahman" (Aitareya Upanishad 3.3 of the Rig Veda) Ayam Atma Brahman - "This Self (Atman) is Brahman" (Mandukya Upanishad 1.2 of the Atharva Veda) Tat Tvam Asi - "That Thou art " (Chandogya Upanishad 6.8.7 of the Sama Veda) Aham Brahmasmi- "I am Brahman" (Brhadaranyaka Upanishad 1.4.10 of the Yajur Veda). Thus Brahman is present in everything. This matches very well with the concept of modern physics that everything is made out of the same fundamental particles. Another basic finding of quantum theory is the involvement of the observer in the observed things. It is impossible to separate the effect of the measuring apparatus from the object measured. Detachment of the two is just not possible. Such an idea about the observer and the object of observation is also emphasized in Upanishads. It is behind the holistic philosophy about mind and body.

A leading current model of origin of universe assumes that there was total vacuum in the beginning and the universe arose from a quantum fluctuation. In this way something came out of nothing. At that time it was totally dark since light had not emerged from vacuum yet! Compare this model with the following quotation from Vayupuran about origin of universe. "In the beginning, there was nothing in the universe. The Brahman (the divine essence) alone was everywhere. The Brahman had neither color nor scent; it could not be felt or touched. It had no origin, no beginning or no end. The Brahman was constant and it was the origin of everything that was destined to be in the universe and the universe was shrouded in darkness. nasadiya sukta  of Rig Veda(story of creation) also mentions that there was total darkness before creation.

There are strange facts in the theory of relativity also: It requires that measurement of time depends on observer’s motion and also the strength of gravitational field he/she is in. An often recurring mention in Hindu scriptures is that Brahma’s time is different from ours. When one hears about Arjun looking at the past, present and future in the mouth of Lord Krishna in Vishwaroop Darshan (Ch.11 of Bhagvatgeeta), one is reminded of collapse of the space time coordinate system near singularities of general theory of relativity. Also, it is well known that Hindu scriptures came up with the correct order of magnitude of the age of universe of several billion years, when other religious systems insisted on the age to be a few thousand years.
Per Upanishad’s, Brahman cannot be understood by logic! If it can be understood, it is not Brahman! There is a story about two yogis.
Some parts of Vedas are full of worship of natural elements like wind, water, fire etc and also picture Gods to look like human beings in the form of avatars. In some parts of Vedas and many Upanishads, we see clearly concept of abstract, omnipresent, invisible, eternal, transcendent and immanent Brahman who has qualities unfamiliar in our everyday life.

Scientist such as Penrose, Hameroff and Stapp have suggested that consciousness in our brain may arise from atomic size domains and hence consciousness may be quantum mechanical in nature. but currently there is no real understanding of consciousness.link
There is an all pervading holistic non-local layer which we may call Brahman. Part of our consciousness may draw on this. This connection may be what is called Atman. Non-local entanglements of atoms may be also related to this layer.

Posted by Decoding Hinduism Pradeep Singh at 9:15:00 AM 3 comments: