Indra is the leader or King of the Devas or gods and the lord of Svargaloka or heaven according to vedas. 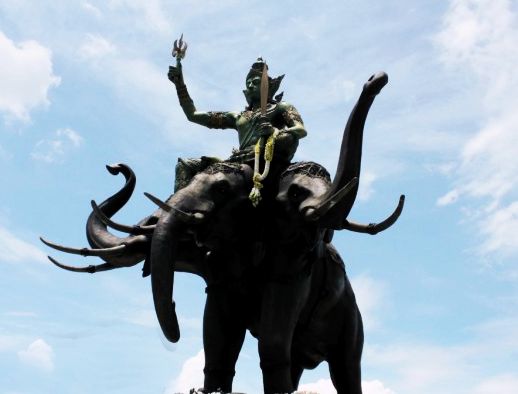 He is also known as Śakra (mighty one) in the Rigveda and is the god of rain and thunderstorms.
In the Vedic period, the number of gods was assumed to be thirty-three and Indra was their lord. (Some early post Rigvedic texts such as the Khilas and the late Vedic Brihad-Aranyaka Upanishad enumerates the gods as the eight Vasus, the eleven Rudras, the twelve Adityas, Indra, and Prajapati).
As lord of the Vasus, Indra was also referred to as Vāsava.
Later, Indra became the prototype for all lords and thus a king could be called Mānavēndra or Narendra (Indra or lord of men) and Rama, the hero of the Ramayana, was referred to as Rāghavendra (Indra of the clan of Raghu).
Krishna mentions himself as Indra among gods :

Of the Vedas I am the Sama Veda; of the demigods I am Indra, the king of heaven; of the senses I am the mind; and in living beings I am the living force [consciousness].” (Bhagavad Gita 10.22)

As the god of war, he is also regarded as one of the Guardians of the directions, representing the east. As the favourite ‘national‘ god of the Vedic Indians, Indra has about 250 hymns dedicated to him in the Rigveda.
In the balakanda of the Valmiki Ramayanam, 15th sarga, Indra is described as “tridasha raajaanam sakram”. Megasthanes wrote about that 30 walled cities of the powerful Andhras in his Indica, They have been recently unearthed by ASI.
“Andhra” must be derived from “Indra” as is in the french “andrei”.
He wields a lightning thunderbolt known as vajra and rides on a white elephant known as Airavata. Indra is the supreme deity and is the twin brother of Agni and is also mentioned as an Āditya, son of Aditi. His home is situated on Mount Meru in the heaven.
Indra appears as the name of a daeva in Zoroastrianism. He is known in Burmese as ðadʑá mɪ́ɴ, in Thai as พระอินทร์ (Phra In), in Malay as Indera, in Telugu as ఇంద్రుడు (Indrudu), in Tamil as இந்திரன் (Inthiran), Chinese as 帝释天 (Dìshìtiān), and in Japanese as 帝釈天 (Taishakuten).
He is associated with Vajrapani – the Chief Dharmapala or Defender and Protector of the Buddha, Dharma and Sangha who embodies the power of the Five Dhyani Buddhas.
Indra as a deity is cognate to other Indo-European gods; they are either thunder gods such as Thor, Perun, and Zeus, or gods of intoxicating drinks such as Dionysus. The name of Indra (Indara) is also mentioned among the gods of the Mitanni, a Hurrian-speaking people who ruled northern Syria from ca.1500BC-1300BC.
According to Rigveda,

Appearance and Characteristics of Indra

One Atharva Vedic verse reads, “In Indra are set fast all forms of golden hue.”
In the RV 1.65 reads, “SAKRA, who is the purifier (of his worshipers), and well-skilled in horses, who is wonderful and golden-bodied.”
Rigveda also reads that Indra “is the dancing god who, clothed in perfumed garments, golden-cheeked rides his golden cart.”
One passage calls him both brown and yellow.
“Him with the fleece they purify, brown, golden-hued, beloved of all, Who with exhilarating juice goes forth to all the deities“.
In Hindu mythology, the rainbow is called Indra’s Bow (Sanskrit: indradhanus इन्द्रधनुस्).
In mythologies, he is the father of Sugreeva (Vanara king who helped Lord Rama to fight Raavana in Ramayana) and Arjuna (3rd among Pandavas) in Mahabharata.
Indra’s weapon “Vajrayudha“, which Indra possessed, is believed to be prepared from backbone of a sage Dadhichi to kill the asuras (demons).
He also uses a white horse named ‘UchchaiSrava‘ which is derived from churning of Milky Ocean.
Infact, INDRA is a post or title and not name of a king or person.
Anyone who conquered Indriyas (both internal and external sense organs) is an Indra.

Indra and the Ants story in Brahma Vaivarta Purana

Indra defeats Vṛtrá and releases the waters. Elevated to the rank of King of the gods, Indra orders the heavenly craftsman, Vishvakarma, to build him a grand palace. Full of pride, Indra continues to demand more and more improvements for the palace. At last, exhausted, Vishvakarma asks Brahma the Creator for help. Brahma in turn appeals to Vishnu, the Supreme Being. Vishnu visits Indra’s palace in the form of a Brahmin boy; Indra welcomes him in. Vishnu praises Indra’s palace, casually adding that no former Indra had succeeded in building such a palace. At first, Indra is amused by the Brahmin boy’s claim to know of former Indras. But the amusement turns to horror as the boy tells about Indra’s ancestors, about the great cycles of creation and destruction, and even about the infinite number of worlds scattered through the void, each with its own Indra. The boy claims to have seen them all. During the boy’s speech, a procession of ants had entered the hall. The boy saw the ants and laughed. Finally humbled, Indra asks the boy why he laughed. The boy reveals that the ants are all former Indras. Another visitor enters the hall. He is Shiva, in the form of a hermit. On his chest lies a circular cluster of hairs, intact at the circumference but with a gap in the middle. Shiva reveals that each of these chest hairs corresponds to the life of one Indra. Each time a hair falls, one Indra dies and another replaces him. No longer interested in wealth and honor, Indra rewards Vishvakarma and releases him from any further work on the palace. Indra himself decides to leave his life of luxury to become a hermit and seek wisdom. Horrified, Indra’s wife Shachi asks the priest Brihaspati to change her husband’s mind. He teaches Indra to see the virtues of both the spiritual life and the worldly life. Thus, at the end of the story, Indra learns how to pursue wisdom while still fulfilling his kingly duties.

The 14 Indras for each Manvantara

Each Manu rules during an eon called a Manvantara. 14 Manvantaras make up a Kalpa, a period corresponding to a day in the life of Brahma. Every Manvantara has 1 Indra that means with every Kalpa 14 Indras changes. Markandye Rishi is said to have a complete age of one Kalpa and in a Purana on his name called “Markandeya Purana” the exact age corresponding to the human age or solar year is described in details. The following list is according to Vishnu Purana (3.1–2)

In Buddhism and Jainism, Indra is commonly called by his other name, Śakra or Sakka, ruler of the Trāyastriṃśa heaven. However, Śakra is sometimes given the title Indra, or, more commonly, Devānām Indra, “Lord of the Devas“. The ceremonial name of Bangkok claims that the city was “given by Indra and built by Vishvakarman.” The provincial seal of Surin Province, Thailand is an image of Indra atop Airavata.
In Jainism, Indra is also known as Saudharmendra, and always serves the Tirthankaras. Indra most commonly appears in stories related to Mahavira, in which Indra himself manages and celebrates the five auspicious events in that Tirthankara’s life, such as Chavan kalyanak, Janma kalyanak, Diksha kalyanak, Kevalgyan kalyanak, and moksha kalyanak.
In China, Korea, and Japan, he is known by the characters 帝释天 (Chinese: 釋提桓因, pinyin: shì dī huán yīn, Korean: “Je-seok-cheon” or 桓因 Hwan-in, Japanese: “Tai-shaku-ten“, kanji: 帝釈天). In Japan, Indra always appears opposite Brahma (梵天, Japanese: “Bonten“) in Buddhist art. Brahma and Indra are revered together as protectors of the historical Buddha (释迦, Japanese: “Shaka“, kanji: 釈迦), and are frequently shown giving Shaka his first bath. Although Indra is often depicted like a bodhisattva in the Far East, typically in Tang dynasty costume, his iconography also includes a martial aspect, wielding a thunderbolt from atop his elephant mount.
Some Buddhists regard the Daoist Jade Emperor as another interpretation of Indra.
In the Huayan school of Buddhism and elsewhere, the image of Indra’s net is a metaphor for the emptiness of all things.
In Bali, the legend of Tirta Empul Temple origin is related to Indra. The sacred spring was created by the Indra, whose soldiers were poisoned at one time by Mayadanawa. Indra pierced the earth to create a fountain of immortality to revive them. 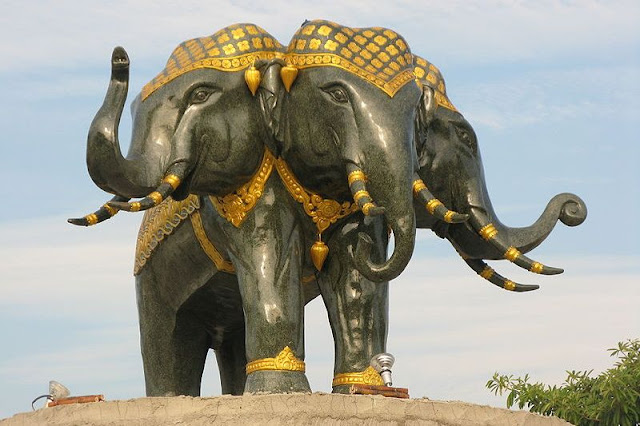