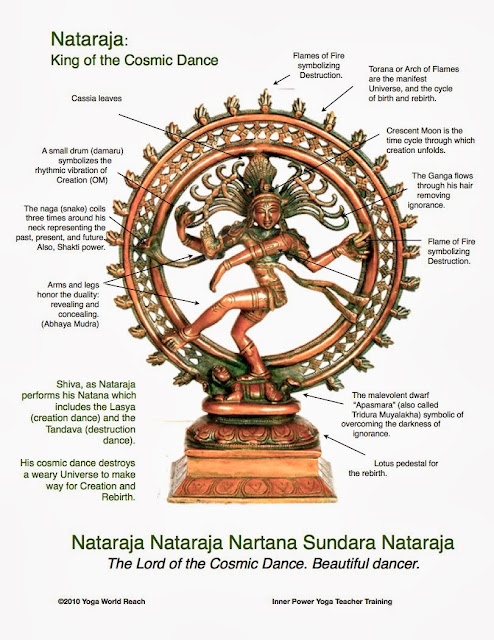 Indian classical dance is an expression of life, involving the body as well as the emotions. Indian Dance is based on texts from Sanskrit, an ancient Indian language – also thought to be the mother of not only Indian languages but also modern European languages. Indian classical dance is one of the oldest dance traditions associated with any of the world’s major religions. It has evolved with the concepts of self and world.
According to Hindu mythology, the Taandav (the frenzied dance performed by Lord Shiva, in grief after his consort Sati’s tragic demise) symbolize the cosmic cycles of creation and destruction, birth and death. His dance is therefore the dance of the Universe, the throb of eternal life. An interesting parallel may be seen in modern physics, which depicts that the cycle of creation and destruction is not only reflected in the turn of seasons and in the birth and death of living creatures but also in the life cycle of inorganic matter.

Nataraja (literally the king of dancers) or Lord Shiva in a graceful dancing pose is worshiped all over India, by classical dancers, and also a collector’s item for connoisseurs of art.
Nataraja – the divine dancer
The origin of Indian dance can be traced back to Bharata Muni (a learned saint) who lived between the 1st and 2nd century and composed a magnum opus on dance, which is known to the world as Natya Shastra. In ancient times, dance was not merely a form of entertainment. On the contrary it was considered a medium of instruction of morality, good values, and scriptures and the expression of reality.
Natya Shastra serves as a common text for all the varieties of Indian classical dance forms. It contains elaborate details on various types of postures, mudras or hand movements depicting different meanings, besides the construction of a stage, the art of make-up and lastly the orchestra. All dance forms make ample use of the nine basic rasas or emotions – hasya (joy and happiness), krodha (anger), bibhatsa (disgust), bhaya (fear), vira (courage), karuna (compassion), adbhuta (wonder) and shanta (serenity).

Natya Shastra further divides classical dance into nritta- the rhythmic elements, nritya- the combination of rhythm and expression, and finally, natya – comprising the dramatic elements embedded in the dance recital. To appreciate natya or dance drama, an individual needs to possess sound knowledge, understanding and appreciation of Indian legends and mythology and folklore. Hindu deities like Vishnu, Krishna, Shiva and Lakshmi, Rama and Sita are commonly depicted in these dances. Each dance form also draws inspiration from stories depicting the life and traditional beliefs of the Indians.

Ancient Indian history reveals that several centuries before Christ, India's art forms of dance, music and theatre were fairly well-advanced. The performing arts, i.e. dance and music reached the acme of their glory, during the reign of the Chola dynasty in Southern India.
Dance forms were nurtured with a purpose in the sacred premises of temples. Temple dancing was imbued with the idea of taking art to the people, and conveying a message to the masses. The temple rituals necessitated the physical presence of mortal women (instead of the ornate, carved figures of heavenly damsels, apsaras) to propitiate the gods. The allegorical view of dance, used for the purpose of the pleasing the devas, was gradually transformed into a regular, service (with deep religious connotations) in the temples of the medieval times.
This was possibly the reason behind the origin of Devadasis (literally: servants of the deity), the earliest performers of the classical Indian dances. They were supposed to pursue the dance forms devotedly and excel in them. At the outset, Devadasis were respectable women and highly talented artists hailing from the highest strata of the society. They lived and danced only in the temple premises – their vocation enjoying great religious prestige. It was only much later that the devadasis condescended to perform in royal courts, in the presence of the elite and the nobility.
A devadasi not only performed on all festive occasions, but also had to be present for the daily rituals, connected with the deity. She was paid from temple funds; moreover the temple supplied the food grains for her and her family. To render a realistic touch a devadasi was ceremonially wedded to the deity. She was consecrated to her lord and thus out of bounds for mortals.
During those bygone times the temples vied with one another for pressing the best dancers and musicians into their services. Temple dancing was institutionalised and the dancing girls were liberally patronised by the kings, elites and mahajans (money-lenders). They were paid lifetime tributes by means of inscriptions engraved in the temples of those times. For instance, the famous temple of Belur ( in modern Karnataka) has several epithets glorifying the Hoysala queen Shantala who was an accomplished dancer and a musician herself. The walls of these temples are also adorned with images of this queen and her spouse, king Vishnuvardhan.

The ancient and medieval temples of Khajuraho, Bhubaneswar and Puri echoed with the famous lyrics of poet Jayadeva, (the 12th century poet who belonged to Kenduli village in Bengal, but eventually settled down in Puri, Orissa).The earliest historical illustrations of Nataraja preaching Natyagama (the fundamentals of dance) in its pure form originates in the Chalukyan temple carvings at Badami and Aihole (both in present Karnataka) in the middle of the 6th century A.D. The devadasi system in these temples flourished well and was a living tradition almost till recent times. Unfortunately, decay set in silently. Owing to several socio-political factors like economic constraints, predominance of tantric practices and licentiousness of the siddhas (saints), jangamas ( Devotees of Lord Shiva, holy men of the Lingayat sect, founded by Saint Basavanna) charanas (bards), patrons (mainly royalty and aristocracy) and priests, the devadasis were sexually exploited and degraded to the level of prostitutes. Shockingly enough, the term devadasi (which had a divine connotation) was replaced by the term Bhogastree (literally = women for enjoying); their knowledge of classical dance and music were treated merely as assets useful for attracting clients.
The British government in India, in order to ameliorate the condition of women, impart to them enlightenment and education and, above all, to protect them from social evils, abolished the Devadasi system during the early 1900s.

Posted by Decoding Hinduism Pradeep Singh at 4:55:00 AM No comments: