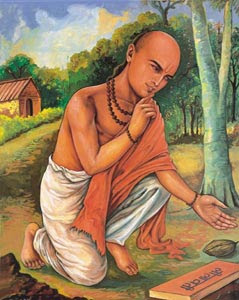 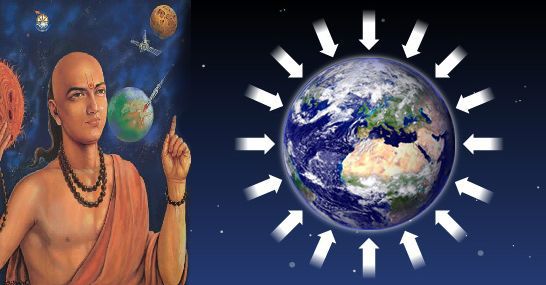 In the chapter “Direction, Place and Time” (Suryasiddhānta, Ch.iii), E Burgess writes:
“(bracketed words are mine) : The (Surya Siddhāntic) theory which the passage (verses 9-12), in its present form, is actually intended to put forth is as follows : the vernal equinox librates westward and eastward from the fixed point, war Piscium, assumed as the commencement of the sidereal sphere– the limits of the libratory movement being 27 degrees in either direction from that point, and the time of a complete revolution of libration being the six-hundredth part of the period called the Great Age (ie, Mahāyuga as defined by Burgess in chapter i,15-17, where he gave it a span of 4320000 years), or 7200 years; so that the annual rate of motion of the equinox is 54″.”

Surya Siddhanta is the first among the traditions or doctrines (siddhanta) in archaeo-astronomy of the Vedic era.
Infact, it is the oldest ever book in world which describes earth as sphere but not flat, gravity being reason for objects falling on earth etc.
This is the knowledge that the Sun god gave to an Asura called Maya in Treta Yuga.
This Maya is father-in-law of Ravana, the villain of first ever epic poem, Ramayana.
Going by calculations of Yugas, first version ofSurya Siddhanta must have been known around 2 million years ago.
However, the present version available is believed to be more than 2500 years old, which still makes it the oldest book on earth in Astronomy.
This book covers kinds of time, length of the year of gods and demons, day and night of god Brahma, the elapsed period since creation, how planets move eastwards and sidereal revolution. The lengths of the Earth’s diameter, circumference are also given. Eclipses and color of the eclipsed portion of the moon is mentioned.
This explains the archeo-astronomical basis for the sequence of days of the week named after the Sun, Moon, etc. Musings that there is no above and below and that movement of the starry sphere is left to right for Asuras (demons) makes interesting reading.
Citation of the Surya Siddhanta is also found in the works of Aryabhata.
The work as preserved and edited by Burgess (1860) dates to the Middle Ages.
Utpala, a 10th-century commentator of Varahamihira, quotes six shlokas of the Surya Siddhanta of his day, not one of which is to be found in the text now known as the Surya Siddhanta. The present version was modified by Bhaskaracharya during the Middle Ages.
The present Surya Siddhanta may nevertheless be considered a direct descendant of the text available to Varahamihira (who lived between 505–587 CE)
Table of contents in Surya Siddhanta are :-
Methods for accurately calculating the shadow cast by a gnomon are discussed in both Chapters 3 and 13.

The astronomical time cycles contained in the text were remarkably accurate at the time.

Surya Siddhanta contains the roots of modern trigonometry. It uses sine (jya), cosine (kojya or “perpendicular sine”) and inverse sine (otkram jya) for the first time, and also contains the earliest use of the tangent and secant when discussing the shadow cast by a gnomon in verses 21–22 of Chapter 3:
Of [the sun’s meridian zenith distance] find the jya (“base sine”) and kojya (cosine or “perpendicular sine”). If then the jya and radius be multiplied respectively by the measure of the gnomon in digits, and divided by the kojya, the results are the shadow and hypotenuse at mid-day.
In modern notation, this gives the shadow of the gnomon at midday as :

Even today many astrologers in India use Surya Siddhanta as base to compute their Panchangs (Almanacs) in many languages.
Download SuryaSiddhanta pdf
citation- Booksfact.com
Posted by Decoding Hinduism Decoding Hinduism at 9:01:00 AM No comments: