In Life After Life Raymond Moody investigates case studies of people who experienced clinical death and were subsequently revived. This classic exploration of life after death started a revolution in popular attitudes about the afterlife and established Dr. Moody as the world's leading authority in the field of near-death experiences.


Some children can remember exact & verifiable details of their prior life they never could have come to know in this their current child life. These details can be objectively and independently confirmed. Remarkably & quite biologically enigmatic: Some of them have birth marks and birth defects at very same locations as the lethal injury causing their often abrupt and violent past life death. Eg. Born with 5 missing fingers after a prior life accident where they were cut off... Birthmarks at the exact location where they got gunshot wounds in their prior life, which


Posted by Decoding Hinduism Pradeep Singh at 11:22:00 AM No comments:

Afterlife : Predicting The Destination By The Movement Of Prana (Life-Force) At The Moment Of Death 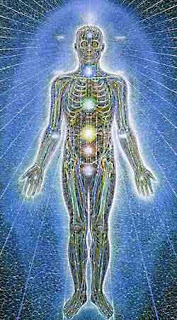 Our karmas are the soul vehicle for this journey to heaven or hell,and if we knew what our karmas were,we would predict our destination.The problem is that we cannot grasp the complexity of our karmas with our limited mind and intellect presently at our disposal.And even if we could know all of our karmas,'The Story Of Jaigishavya' in the previous post makes it clear that even accomplished yogis can be overwhelmed if they all of the infinite number of samskaras deposited in their mind-field.The texts of yoga tell that it is impossible for anyone other than omniscient divine being to know all of them.
The flow of prana during the time of death is regulated by our forces of our karma.This determines the particular gate through which the pranic force departs,and this in-turn shapes the journey that follows.We can make some prediction about the destination of the departed soul,the scriptures tell us,by observing the movement of prana and the precise time it leaves.


Tho yogic interpretation of this is that the six-month period following the spring equinox corresponds to the dominance of solar energy in our body,and this is indicated by the flow of breath through the right nostril (pingala nadi); the six month period following the autumn equinox corresponds to the dominance of lunar energy, indicated by the flow of breath through the left nostril (ida nadi).Accomplished yogis who can leave their bodies at will often do so during twilight when the breath is equally flowing through both nostrils,and prana is likewise flowing through both nostrils.At this time,day and night,sun and moon,are wed,and a yogi leaving the body then goes neither to heaven nor to the hell,but transcends both.Regardless of the time of day,however,accomplished yogis can,if they wish,create the atmosphere of the twilight within their own body by opening sushumma nadi and leaving the body while this nadi is active.

The gate through which the prana leaves the body is another indication of the soul's destination.According to a famous yogic text,Saundaryalahari,the two lowest chakras - the muladhara and the svadhisthana - are connected to the realms of blind darkness and darkness,respectively.The prana of an unliberated soul leaves the body from one of these two chakras and goes to the realm of darkness.Those who leave the body through the manipura chakra (the navel center) go the realm of shining beings (deva loka) and are reborn again after enjoying the celestial pleasures. 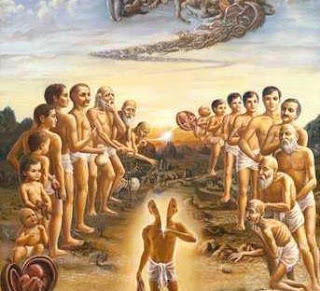 Those who leave the body from any of the chakras above manipura chakra are free from illusion (including the illusion of heaven and hell) and are reborn only if they choose.Hundreds of nadis meet at the anahata chakra (the heart center),in most of us,these have become entangled and knotted,but they can be disentangled with the help of meditation,contemplation,prayer,selfless service,acts of charity,the blessing of the saints, and God's grace.When that has happened,energy flows freely through all the nadis at the heart center,and prana exits from this chakra at the time of death.Following the prana,consciousness leaves the body by the same gate and reaches the realm of the divine,which can transcends both heaven and hell (Katha Upanishad 2:3:14-18)