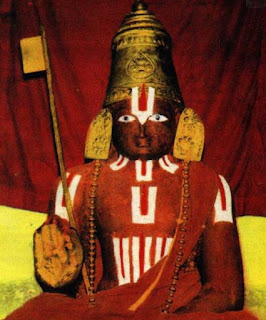 Sri Ramajunacharya was an exponent of the Sri Vaishnavism tradition within Hinduism.
Ramanuja’s thiruvarasu (sacred burial shrine) is the Ramanuja shrine (samaidhi) located inside the Sri Ranganathaswamy temple.
Sandalwood paste and saffron are used to maintain the body and no other chemicals are added.
Twice a year, a coat of camphor mixed with saffron, which produces ochre/orange tint on the preserved body and this tradition has been practiced for more than 878 years.
His body is placed behind his idol and is open for darshan to all devotees.
One can notice nails on fingers, which indicate that it is actually a human body.
His physical body is placed in the southwest corner on the fifth round within the Srirangam temple as ordered by Lord Ranganatha himself.
Even many Srivaishnavas are not aware that in Srirangam, their holiest place hailed as ‘ Bhuloka Vaikuntam‘ ( Heaven on Earth) lies preserved the body of Sri Ramanuja in all its pristine state unostentatiously, without any fanfare or publicity and without using any of the chemical preservatives used for the Egyptian and Goan mummies.
The Egyptian mummies are kept in sleeping position and wrapped in cloth after applying several layers of chemicals.
But Ramanujacharya original body is kept in normal sitting position and open to all for viewing.
This is the only instance where an actual human body is kept inside a hindu temple for so many years.

In the year 1017 A.D., Ramanuja was born in the village of Perumbudur, about twenty-five miles west of Madras. His father was Kesava Somayaji and his mother was Kantimathi, a very pious and virtuous lady. Ramanuja’s Tamil name was Ilaya Perumal. Quite early in life, Ramanuja lost his father.
Then he came to Kancheepuram to prosecute his study of the Vedas under one Yadavaprakasha, a teacher of Advaita philosophy.
Ramanuja had re-installed Govindaraja idol in Tirupati, which was initially thrown into sea by Kulotthunga Chola, a Saivaite.
He attained his Acharyan Thiruvadi (the lotus foot of his Acharya) in Lord Ranganatha temple at Srirangam and ever since, Ramanujacharya original body was mummified and preserved there.
From booksfacts.com
Posted by Decoding Hinduism Decoding Hinduism at 5:06:00 AM 1 comment: