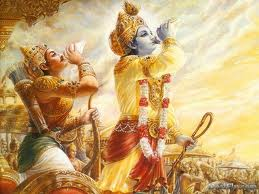 Posted by Decoding Hinduism Pradeep Singh at 11:18:00 AM No comments:

Sri Krishna was shot by an arrow of a hunter on his feet on the thursday evening of 23rd January 3102 BCE.
He left his physical body on 24th January 3102 BCE at 02 hours 27 minutes 30 seconds.
The next sunrise was on Friday, with moon in Aswini Nakshatra, tithi (lunar day) being Suddha Padyami (sukla pratipad or first day of lunar month) of Chaitra Maasam (lunar month) in Pramādi named year.
This date is 18 February 3102 BCE according to Julian Calendar.
After exit of Krishna, his race, Yadavas fought among themselves and everyone died except Krishna’s grandson Vajranabha.
The date is confirmed in Sripada Sri Vallabha Charitra (life history of one of the Avatars (incarnations) of the deity Sri Dattatreya in kaliyuga during 14th century AD).

Mahabharata War and the decimation of Yadavas thus happened at the Yuga-Sandhi, the point of transition from one yuga to another. The scriptures mention Sage Narada to have momentarily intercepted the demon Kali on his way to the Earth when Duryodhana was about to be born in order to make him an embodiment of ‘arishadvargas‘ (6 bad qualities of human) and adharma in preparation of the era of decay in values and the consequent havoc.

Linga Purana describes the following symptoms of the Kali Yuga.

Thieves will become kings, and kings will be the thieves.

Rulers will confiscate property and use it badly. They will cease to protect the people.

Base men who have gained a certain amount of learning (without having the virtues necessary for its use) will be esteemed as sages.
There will be many displaced persons, wandering from one country to another.

Predatory animals will be more violent.

Fetuses will be killed in the wombs of their mothers.

No one will be able to trust anyone else.
People will be envious.

There will be many children born whose life expectancy is no more than 16 years.

People suffering from hunger and fear will take refuge in underground shelters.

Young girls will do trade in their virginity.

The god of clouds will be inconsistent in the distribution of the rains.
Shopkeepers will run dishonest businesses.

There will be many beggars and unemployed people.

Everyone will use hard and vulgar language.

Men will devote themselves to earning money; the richest will hold power.

The state leaders will no longer protect the people but, through taxes, will appropriate all wealth.

Water will be lacking.

Pre-cooked food will be readily available.

This Kali Yuga spans for a long time period of 432,000 years, although multiple other durations have been proposed by many.
Human civilization degenerates spiritually during the Kali Yuga,which is referred to as the Dark Age because in it people are as far away as possible from God.

In Satya Yuga, the first stage of development, the bull has four legs, but in each age dharma is reduced by one quarter.
By the age of Kali, dharma is reduced to only a quarter of that of the golden age, so that the bull of Dharma has only one leg now.

Major differences of Karma and Dharma in each Yuga:

Also, in Satya Yuga, one could please god(s) only by doing severe penance or meditation.
In Treta Yuga, one had to do Yagnas, sacrifices and donations.
In Dwapara Yuga, one had to recite mantras and generate energy. Also Astras (weapons) worked.
In Kali Yuga, only tantra and recitation(chanting) of name will work.

King Parikshit (Grandson of Arjuna) allowed Kali to enter into his kingdom based on the condition : In Kali Yuga, if one thinks of committing a sin, he will not be punished. He will bear punishment only after committing the act physically.
But, when someone even thinks of doing a good deed wholeheartedly, they will get the benefit of actually doing it.
So, this Kali Yuga is more powerful as our positive thoughts are good enough to overcome all negativity around us.

Brahma Vaivarta Purana (in 4.129) (related to Rathantara kalpa) mentions a ten thousand year period, starting from the traditional dating of the Kali Yuga epoch (January 24 at 2:27 AM, 3102 BCE), during which bhakti yogis will be present.
Lord SriKrishna foretold that this Kali Yuga will be full of extreme hardships for people with ideals and values.

Translation : For 10,000 years of Kali such devotees of Mine will be present on earth. After the departure of My devotees there will be only one varna, Outcaste !

Translation : Sri Krisna said: Lord Hari will stay on this earth for the first ten-thousand years of Kali-yuga. Till then gods will be worshipped and the Puranas and scriptures will also be present.

5116 years have elapsed as of 2014 AD taking into account the start date of kaliyuga.
So, the Golden Period ends in 6898 AD and after that all religions and beliefs will vanish.

Posted by Decoding Hinduism Pradeep Singh at 9:33:00 PM No comments: