What is mind? No matter!
What is matter?
Never mind!Even as scientists all over the world are making concerted efforts to understand the human mind and the human consciousness, a plethora of provocative questions still remain unanswered. As someone said, if we could satisfactorily explain the workings of our minds, our brains would be so simple and underdeveloped that we wouldn't be able to understand anything! This is a definite limitation of the conventional sciences. And here's where people take recourse to spirituality, imagination and the occult.
Vedic Science Has the Answers!
Professor Ashok Sharma, a former Indian professor of Applied Physics, who was also a scientist at Harvard University, has formulated some path-breaking theories and postulations based on the ancient Vedic Sciences that give us some powerful insights into the gray regions of the human mind, and help us understand our consciousness.Even after treading for long in the realm of science, Prof Sharma feels that science fails to understand consciousness as an independent entity. He says, "Science cannot integrate a non-physical entity, like consciousness, into its conceptual framework, and views human personality as a non-conscious physical system."
What is Consciousness?
Consciousness, according to Prof Sharma, is a non-physical entity, which is essentially different from the four basic entities of space, time, energy and matter of the conventional science. Consciousness does not have any physical attribute or property or action, but is endowed with autonomous will power of creation, retention and annihilation of the knowledge of an individual or that of the universe.Quoting the Upanishads (Shvetashwar, 6/19), he says that consciousness itself is non-differentiable, inactive, placid, indescribable and non associative:"Nirajanam Nishkriam Shantam Nirvadyam Niranjanam"But again, consciousness manifests itself in the form of knowledge.
Sharma's Formula
In the light of the above discussion, Prof Sharma has put forward a formula, where consciousness is represented by a symbol Ψ, which is a set of concepts of knowledge. In the normal state of consciousness, an individual human mind or a conscious system is capable of the finite set of concepts of knowledge I, i.e.,Ψn = I,which he defines as Ego, soul, Atman or Karan Sharir.However, the field of the non-physical entity of consciousness can be expanded to infinity, so as to cognize the total infinite set of concepts of knowledge G, i.e.,Ψ∞= G,which he variously defines as God, Parmathma or Brahma.
Yoga & Meditation
Prof Sharma points out that consciousness is endowed with autonomous will power, and the techniques of Yoga and meditation must be considered as the methods of realization of the self and the development of the will power (Sankalpa Shakti) for the expansion of the field of consciousness Ψ.
Bridging the Gap
Sharma quotes Prof Wigner - "The very study of the physical world leads to the conclusion that the concept of consciousness is an ultimate reality and, all the possible knowledge, concerning objects can be given as its wave function" - and concludes that the gap between Vedic and scientific systems of knowledge has been considerably reduced and scientists have started realizing the necessity of integration of consciousness with the conceptual structure of science.
In Summary
The basic conceptual structure of Prof Ashok Sharma's "Science of Consciousness" can be summarized as a set of the following propositions:The element of consciousness (Chetan Tatva) is the fundamental entity, which is non-physical, inactive, placid, indescribable and non-associative, but endowed with autonomous will power (Swasankalpa Shakti) to create, retain and annihilate all concepts of knowledge of self and the universe, which can be represented by the symbol Ψ. The concept of consciousness is, essentially, analogous to the vacuum states of the relativistic quantum field theory, except for its autonomous will power.The phenomena of existence of the world are, essentially, the existence of the concepts of knowledge of the phenomenal world in the unified field of consciousness. In view of the non-physical nature of the consciousness, the concept of the unified field of consciousness must be clearly distinguished from the unified field of the physical fields.The stimulus-response function of the conscious system of human personality is due to the association of consciousness, with physiological brain, so as to provide the operation of mind, 'Ideation Body' or Karan Sharir. In the normal state of consciousness Ψn, an individual is ignorant about his full potentialities and depends on the knowledge gained through the sensory perception for the expansion of the field of consciousness of knowledge. Since, in the normal state of consciousness, an individual has the capacity of the cognition of a limited set I of the concepts of knowledge, it can be defined as Soul, 'Ideation Body', Atma or Karan Sharir, represented by, Ψn = I.The field of consciousness can be expanded by the development of the capability of non-sensory intuitive cognition of knowledge through the techniques of Yoga and meditation, so as to attain the super-conscious state, in which an individual has direct intuitive revelation of knowledge. The final state of Yogic attainment is to have the consciousness of the infinite set of knowledge of the universe, i.e., Ψ∞ = G, which can be interpreted as the realization of God, Allah, Paramatma or Brahman.
The Future of Science!
Prof Sharma, who now lives in New Delhi, is currently working on the conceptual development of the Science of Consciousness, Social System Science and Social Engineering. He hopes that the heritage of the Vedic system of knowledge should be viewed as the future extension of the present non-conscious science, as the science of consciousness.
Need of the Hour
"There is an urgent need to reinterpret the Vedic texts in modern terms - a task which is now possible with the availability of computers and the recent developments in the fields of cognitive sciences, artificial intelligence and theories of knowledge representation", says Prof Sharma, adding, "However, such an effort requires a concerted effort of the enlightened community of Indians."
Posted by Decoding Hinduism Pradeep Singh at 4:40:00 PM No comments: Links to this post

This Jiva / Mind after forgetting it's true nature (being part of & of the nature of that Infinite Universal Consciousness), inherits a body & makes appearance in this world. Such a conditioned soul / Jiva takes birth in different bodies & moves from one body to other body after death. Such a journey of soul / Jiva goes forever until it sees the truth again.

But Infinite Universal Consciousness, called "Brahmn" is independent of all these & pervades this whole universe, beyond this Jiva & beyond this body.

Below are some verses from Bhagwat Gita which illustrates the same:

"Sri Krishna said: O Arjuna, The living entities in this conditioned world are My eternal fragmental parts. Due to conditioned life, they are struggling very hard with the six senses, which include the mind."

"Sri Krishna said: O Arjuna, The living entity in the material world carries his different conceptions of life from one body to another as the air carries aromas. Thus he takes one kind of body and again quits it to take another."

"Sri Krishna said: O Arjuna, The living entity, thus taking another gross body, obtains a certain type of ear, eye, tongue, nose and sense of touch, which are grouped about the mind. He thus enjoys a particular set of sense objects."

"Sri Krishna said: O Arjuna, The foolish cannot understand how a living entity can quit his body, nor can they understand what sort of body he enjoys under the spell of the modes of nature. But one whose eyes are trained in knowledge can see all this."

"Sri Krishna said: O Arjuna, I am seated in everyone’s heart, and from Me come remembrance, knowledge and forgetfulness. By all the Vedas, I am to be known. Indeed, I am the compiler of Vedanta, and I am the knower of the Vedas."

"Sri Krishna said: O Arjuna, Besides these two, there is the greatest living personality, the God Soul, the imperishable Lord Himself, who has entered the three worlds and is maintaining them."
Posted by Decoding Hinduism Pradeep Singh at 9:13:00 PM No comments: Links to this post

Email ThisBlogThis!Share to TwitterShare to FacebookShare to Pinterest
Labels: BODY AND MIND, MIND

MIND? WHAT IT CONSISTS OF??? 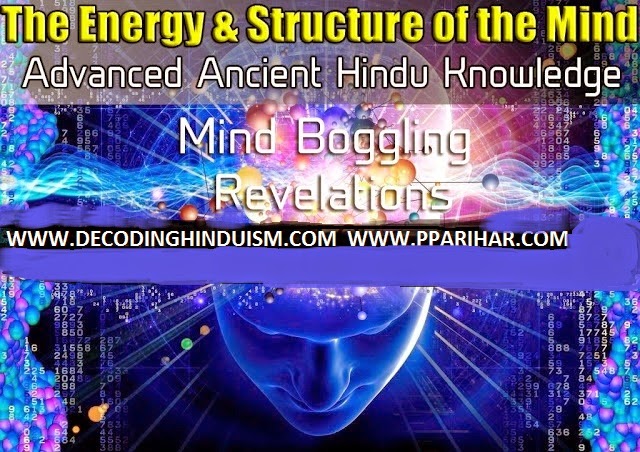 The Five Levels
In the Taittiriya Upanishad, the individual is represented in terms of five different sheaths
or levels that enclose the individual's self. These levels, shown in an ascending order, are:

These sheaths are defined at increasingly finer levels. At the highest level, above the
emotion sheath, is the self. It is significant that emotion is placed higher than the intellect.

This is a recognition of the fact that eventually meaning is communicated by associations
which are influenced by the emotional state.

The key notion is that each higher level represents characteristics that are emergent
on the ground of the previous level. In this theory mind is an emergent entity, but this
emergence requires the presence of the self.


The Structure of the Mind

The Sankhya system takes the mind as consisting of five components: manas, ahankara,
chitta, buddhi, and atman
Manas is the lower mind which collects sense impressions. Its perceptions shift from
moment to moment. This sensory-motor mind obtains its inputs from the senses of hearing,
touch, sight, taste, and smell. Each of these senses may be taken to be governed by a separate
agent.

Ahankara is the sense of I-ness that associates some perceptions to a subjective and
personal experience.
Once sensory impressions have been related to I-ness by ahankara, their evaluation and
resulting decisions are arrived at by buddhi, the intellect. Manas, ahankara, and buddhi are
collectively called the internal instruments of the mind.
Next we come to chitta, which is the memory bank of the mind. These memories con-stitute the foundation on which the rest of the mind operates. But chitta is not merely
a passive instrument. The organization of the new impressions throws up instinctual or
primitive urges which creates different emotional states.

This mental complex surrounds the innermost aspect of consciousness which is called
atman, the self, brahman, or jiva. Atman is considered to be beyond a finite enumeration of
categories.
All this amounts to a brilliant analysis of the individual. The traditions of yoga and
tantra have been based on such analysis. No wonder, this model has continued to inspire
people around the world to this day.
Posted by Decoding Hinduism Pradeep Singh at 1:06:00 PM No comments: Links to this post