Invention of Free energy-100 years ago by Meyers

Roy Meyers' Absorber -- "Free Energy"
by Robert A. Nelson
As planet Earth suffers under the relentless onslaught of ever increasing human consumption, we are becoming increasingly desperate for sources of energy with which to power our pretensions of civilization. There is not enough oil or coal available to sustain the present rate of growth, and the apparently inevitable result will be endless wars over dwindling resources. There are, however, numerous marvelous alternative energy technologies that have been suppressed by the powers that be. We could easily be enjoying the benefits of clean, cheap (and even free) energy in various forms, were it not for the insatiable greed of our corporate masters, who rule the world without regard for humanity or the environment.There are dozens of stories that can be told of inventors who presented wonderful liberating technologies, only to be ruined for their efforts. Many people have heard of various types of so-called "free energy" or "over-unity" generators that tap what scientists call Zero Point Energy (and other names, such as the aether) without need for fuel and without producing any pollution. Detractors like to label such devices as impossible "perpetual motion machines", even though some of them are solid state electronic systems that have been built and shown to work. Readers who are interested in such possibilities need search no farther than the impeccable history of Thomas Henry Moray, which is widely published on the internet (e.g., http://www.rexresearch.com/moray.moray.htm).If that is too much bother for you, then just continue reading here. This is the little-known story of Roy Jerome Meyers, who invented an "Absorber" that produced limitless electrical power from the terrestrial magnetic field.Almost 100 years ago, Meyers served a 3-1/2 year sentence in the Arizona state prison at Florence. Before his incarceration, he had already invented an improved trolley wheel head that prevented it from jumping off the wire. While he was imprisoned, he was inspired to invent a device that would draw electricity from the atmosphere. He conferred with Superintendent Sims and Parole Clerk Sanders, and convinced them to give him the opportunity to develop his idea in a wooden shed on the grounds of the penitentiary. Within a few weeks, using easily available materials (chrome steel magnets and iron wire), he constructed the first crude working model, and used it to spark the gas engines of the prison's pump house. His second model developed 8 volts. Miss Kate Barnard, who was State Commissioner of Charities and Corrections of Oklahoma, was a guest of Superintendent Sims at the time, and she saw the machine in operation. Miss Barnard was so impressed by it and by Meyers' essential integrity (despite the lapse that had gotten him imprisoned) that she told the story of Roy Meyers when later she appeared before the Arizona legislature to address them concerning prison reform. The legislature and Governor Hunt were convinced to grant Meyers an unsupervised leave of absence for 30 days to travel to Washington DC in order to apply for a patent.Meyers gave this account of his trip:

"When I arrived in Washington and laid my plans before the patent office experts, they merely smiled and told me that I would have to build a model and demonstrate my claims --- that it seemed strange that I, unknown as I am in the electrical world, should have accomplished the things for which Edison, Tesla and other experts have been striving for years."They could not grasp the meaning of my drawings nor the explanation I tried to make to them. There was little time to spare, as I had only 20 days left of my leave, but I set to work in a few days was able to take a crude model around to the patent office to make a demonstration."Arriving at the patent office I telephoned to a friend who had been so kind as to introduce me and aid me in reaching the proper officials. The absorber was hoisted on two short poles and made to work. While they were as yet unable to understand the principles involved and hardly willing to believe their eyes, they were forced to admit that I had something new and different, and they told me that there would be no further objection; that I might file my application without further delay. "I hope to construct my first large machine right here in Phoenix. I feel grateful; to Governor Hunt and others for what they have done for me and to the help they have given in securing protection I might not otherwise have had, and I am desirous of demonstrating this gratitude. I am going back to Florence today to resume the serving of my sentence, which will expire in 10 months. Then, here in Phoenix, I will begin the work of making my machines." (Technology World Magazine, 1912)

Meyers planned to build a 200 foot tower upon which to place an "Absorber" (as he called it) with sufficient power to light the city of Phoenix. According to him, it comprised "a series of magnetized steel plates set in a circle and this mechanism attracts the electricity from the atmosphere. This is carried by wires to a transformer in the engine house below and thence is applied to produce either power or light after the usual manner.

"The flow of electricity is constant. When it emerges into the transformer it is in the form of a direct current. It will absorb the electricity day and night and will work whenever the wireless will work. I can put up a plant to supply such a building as the Adams Hotel for about $1500, and one of the principal items of the expense is the cost of the towers, the wires, the magnetizing of one set of plates, which is part of the secret of the treatment which makes it respond to the accumulations of the atmosphere."For use in the case of an electrical storm I have made what I call a modified form of circuit breaker, such as is commonly used as a lightning arrester on telegraph lines. In case of a storm the accumulator would suddenly become overcharged, possibly, and as the electricity would not of itself flow back into the air, the result might be disastrous. So I send it down into the ground, whenever the voltage rises above a certain amount."

And the story ends there. It is not known what became of Roy J. Meyers. No "Absorber" was built to power Phoenix, and it appears that a US Patent was not granted. This writer first learned of Meyers' Absorber in 1986, and repeatedly searched for it in the US Patent Gazette, to no avail. It was not until 2006 that Meyers' British patent for "Improvements in and Relating to Apparatus for Producing Electricity" was located after several periodic advanced searches of the European Patent Office online (http://ep.espacenet.com). The patent has long since expired and entered the public domain. It is reprinted below for your edification.     It should be obvious from this brief but indisputable account, and the description given in the patent, that "free energy" is a reality. Anyone who thinks otherwise is merely ignorant or in denial. 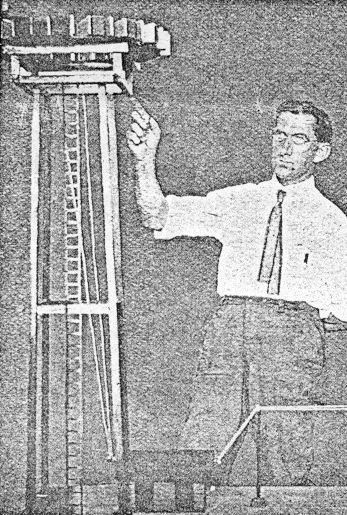