Hinduism is the Mother of all Civilisation and Cultures
Indian Hindu Links of AUSTRALIA
Australian Aboriginal and Dingo Mystery
Proved Indian Hindu Links
of all civilization .
Australia holds some of modern humans’ earliest archeological evidence, with relics dating back to about 45,000 years ago. In other words, Australian aboriginals are the oldest continuous population of humans on the planet . Shares very strong bond with Ancient Hindus and their traditions .well before Europeans could even dream of exploring the far-off continent
Before you dig deep in to this part of case study u must understand the step motherly treatment given by these western scientist who always attempt to deminish Hindu's proud history of mankind as much as possible. 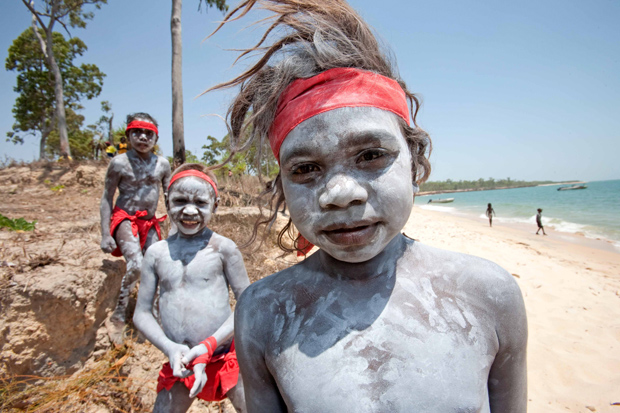 Ancient Maya artifact centuries old !
Hold ur breath Watch it closely ! You wont belive your eyes... Ancient vimanas of India was widely used to explore our planet from gold silver etc ! The ancient indian civilization had wide range of historical evidence of mining in Australia , Mexico and other parts of world .
Cave men of those times called them as Angels from sky !!! Or Fallen Angels ... And western scientists called them "Aliens" . High time we investigate ancient Hindu texts which hold the key for so called "Missing link" the link is not in the skies may be just beneath us.


Hindu History of Indonesia
Many civilizations in South East Asia have been closely patterned on the Indian model. Wonderful monuments such as Angkor wat, Pagan, Prambanan and Borobudur stand testimonial to Indian cultural influence.
Sanskrit writings along with sophisticated rituals and architectural technique - great organization and control of wealth and prosperity.
‪SuhartoSukarno‬ (1901- 1970) Indonesian nationalist leader and the first President of Indonesia. He helped the country win its independence from the Netherlands. He echoed the same sentiments.
In a special article in The Hindu on 4 January 1946, Sukarno wrote:
"In the veins of every one of my people flows the blood of Indian ancestors and the culture that we possess is steeped through and through with Indian influences.
Two thousand years ago people from your country came to Jawadvipa and Suvarnadvipa in the spirit of brotherly love. "
"They gave the initiative to found powerful kingdoms such as those of Sri Vijaya, Mataram and Majapahit. We then learnt to worship the very Gods that you now worship still and we fashioned a culture that even today is largely identical with your own. Later, we turned to Islam: but that religion too was brought by people coming from both sides of India."
Java was known by Indian chroniclers before 600 BCE. The name Java comes from the Sanskrit Jawadwip, which means a (dvip) island (yawa) shaped like a barley corn. The Vedic Indians must have charted Java, Yawadvip, thousands of years ago because Yawadvip is mentioned in India's earliest epic, the Ramayana. The Ramayana reveals some knowledge of the eastern regions beyond seas; for instance Sugriva dispatched his men to Yavadvipa, the island of Java, in search of Sita. It speaks of Burma as the land of silver mines.
"yatnavanto yava dviipam sapta raajya upashobhitam | suvarNa ruupyakam dviipam suvarNa aakara maNDitam || 4-40-30 yava dviipam atikramya shishiro naama parvataH | divam spR^ishati shR^ingeNa deva daanava sevitaH || 4-40-31 eteSaam giri durgeSu prapaateSu vaneSu ca | maargadhvam sahitaaH sarve raama patniim yashasviniim ||" 4-40-32 - The Ramayana.
“You strive hard in the island of Yava, which will be splendorous with seven kingdoms, like that even in Golden and Silver islands that are enwreathed with gold-mines, in and around Yava islands. On crossing over Yava Island, there is a mountain named Shishira, which touches heaven with its peak, and which gods and demons adore. You shall collectively rake through all the impassable mountains, waterfalls, and forests in these islands for the glorious wife of Rama.”
The Agni Purana, along with many other Puranas, calls India proper as Jambudvipa as distinguished from Dvipantara or India of the islands or overseas India. Towards the end of the fifth century, Aryabhatta, the famous Indian astronomer, wrote that when the sun rose in Ceylon it was midday in Yavakoti (Java) and midnight in the Roman land. In the Surya Siddhanta reference is also made to the Nagari Yavakoti with golden walls and gates. Strong Hindu influences were inevitable, given that the spiritual inspirational source
Prambanan Temple is situated 18km east of Yogyakarta city in Central Java. It is the largest Hindu temple compound in Indonesia and is dedicated to Trimurti, the three highest gods in Hinduism. It is known locally as the Loro Jongrang temple, after the nearby village, or the temple of Durga or the ‘Slender Virgin’.

There are a total of 237 temples in this Shivaite temple complex but many are in ruin. The architecture is tall and pointed and the central building is the tallest at 47m high. It is dedicated to Shiva. Hence is known as Chandi Shiva Mahadeva temple.
Prambanan is a stunningly beautiful building built in the 9thcentury during the reign of two kings, and Rakai Pikatan Balitung. Rises as high as 47 meters (5 meters higher than Borobudur temple). The temple complex is huge, much more spread out than Borobodur. It's a pity that the glory of this temple is largely shadowed by the more monotonous architecture of the Borobudur Temple nearby.
In fact, the Prambanan Temple compound is more beautiful and as magnificent as the Borobudur! the Prambanan looks imposing and serene ornate and intricate ......its popularity to tourists is overshadowed by Borobudur. This site is completely worth a visit, even more so than Borobodur.

Posted by Decoding Hinduism Pradeep Singh at 1:59:00 PM No comments:

Email ThisBlogThis!Share to TwitterShare to FacebookShare to Pinterest
Labels: ancient egypt and vedic roots, hinduism and aztec, hinduism in australia, hinduism in world, mayan and hinduism, ramayan in mexico

Ramayana and RAM in many parts of world

Ramayana and Cultural Fusion in Various Countries
Depending on the methods of counting, as many as three hundred [1,2] versions of the Indian epic poem, the Ramayana, are known to exist. The oldest version is generally recognized to be the Sanskrit version attributed to the sage Valmiki. The story of Ramayana, particularly, travelled beyond our shores, and became highly indigenous with various elements of the tale changing suitably to match the local cultural ethos. A year-long exhibition in Singapore on the mythological-cum-historical text, ‘Ramayana Revisited – A tale of love & adventure', at the Peranakan Museum, ignited the exploration of the role the story plays as a cultural unifier for the Asian region.
The Ramayana has spread to many Asian countries outside of India, including Burma, Indonesia, Cambodia, Laos, Philippines, Sri Lanka, Nepal, Thailand, Malaysia, Japan, Mongolia, Vietnam, China etc. The original Valmiki version has been adapted or translated into various regional languages, which have often been marked more or less by plot twists and thematic adaptations.
The following are some of the versions of the Ramayana that have emerged outside India:

• Burma (Myanmar) - Yama Zatdaw
• Cambodia - Reamker
• Java, Indonesia - Kakawin Ramayana
• Kingdom of Lan Na - Phommachak
• Laos - Phra Lak Phra Lam
• Malaysia - Hikayat Seri Rama & Hikayat Maharaja Wana
• Nepal - The Nepal Bhasa version called Siddhi Ramayan was written by Mahakavi Siddhidas Mahaju Amatya during Nepal Bhasa renaissance era and the Khas language (later called "Nepali") version of Bhanubhaktako Ramayan by Bhanubhakta Acharya marked the first epic written in the language.
• Philippines - Maharadia Lawana & Darangen of Mindanao
• Tai Lü language - Langka Sip Hor
• Thailand - Ramakien
In Japan, with the spread of Buddhism it came to be known as Ramaenna or Ramaensho, in which the story/character of Hanuman was ignored. In one other variant, Suwa engi no koto written in the fourteenth century, the protagonist, Koga Saburo Yorikata, is the youngest son whose exile is caused by his brothers. In another variant called Bontenkoku, Tamawaka (Rama) is a flute player who escapes with his abducted wife Himegini (Sita) while her captor King Baramon (Ravana) is away for hunting. Other Ramayana-derived stories in Japan including Kifune no honji, Onzoshi shimawatari and Bukkigun, have also demonstrated a deep convergence between the characters of Rama and Ravana. [3,7]
In China, the earliest known telling of Ramayana is found in the Buddhist text, Liudu ji jing. Significantly, and unlike in Japan, the impact of Ramayana on Chinese society arguably was responsible for the creation of a popular fictional monkey king's character, Sun Wukong (Hanuman), in a sixteenth century novel Xiyou ji. We also find characters with the names of Dasharatha, Rama and Lakshmana in a fifth century Chinese text, Shishewang yuan. The Dai ethnic group of south-western Yunnan province also know the story as Lanka Xihe (Ten heads of Lanka). The epic also spread to Tibet and Mongolia through Buddhism, with a notable variant being that it is Bharata, and not Lakshmana, who accompanies Rama in exile. [3]
A Ramayanic scene found painted in ancient ‪#‎Italian‬ houses discovered in archaeological excavations. Kausalya, Kaikeyi and Sumitra, wives of the aged king Dasharath sharing the divine fertility potion to beget illustrious sons. The Dasharath legend is also part of ancient Egyptian lore. All this shows that countries of Europe and Africa followed Vedic dharma in ancient times. [5] Rama-Seeta-Lakshmana walking through the forest in the order described in the Ramayana, a scene delineated in ancient Italian homes. Italian archaeologists express bewilderment at these paintings because they are unaware that ancient Europe including Italy practiced Hinduism. [6]
The Ramayana, as it is called “The Grand Epic of Vedic World”, imparts instruction in every aspect of life – in upright behaviour in the world by its code of conduct, in cultural refinement by its literary beauties, in spiritual endeavour by its undercurrent of Upanishadic affluence. A study of Ramayana cleanses the mind and heart of its impurities and sins and makes the earthly existence pleasant and peaceful and at the same time overcomes the obstacles that bar the progress towards attaining the Supreme Lord. It is rightly said in the opening of Ramayana Mahakavya “As long as the rivers and mountains continue in this world the story of Ramayana will last”. How else can anybody summarise the greatness of the epic?
Ramayana was even followed my ancient Mexican tribes and Ancient Iranians. Italy was once Vedic civilization...Shivlings were unearthed during excavation there too. Some say Vatican got its name from Sanskrit word Vaatika
Divided by Boundaries, United by Ramayana
=====================================================
Notes:
[1] Camille Bulcke, Ramkatha: Utpatti aur Vikās (The Rāma story: Original and development), Prayāg: Hindī Pariṣad Prakāśan, 1950.
[2] A. K. Ramanujan, "Three hundred Rāmāyaṇas: Five Examples and Three Thoughts on Translation", in Paula Richman (ed.), Many Rāmāyaṇas: The Diversity of a Narrative Tradition in South Asia, Berkeley, California: University of California Press, 1991, p. 48, note 3.
[3] http://www.thehindu.com/…/ramayanas-reto…/article2909774.ece
[4] http://www.stephen-knapp.com/photographic_evidence_of_vedic…
[5] http://www.stephen-knapp.com/art_photos_twlevethirteen.htm
[6] http://www.stephen-knapp.com/art_photo_eleven.htm
[7] http://www.sundayobserver.lk/2012/05/13/spe03.asp
[8] http://in.rbth.com/…/when_the_ramayana_hit_the_russian_stag…
Posted by Decoding Hinduism Pradeep Singh at 11:23:00 AM No comments: