South Korea and Indian temple town Ayodhya has two millennia-old ties which were discovered in last decade.
South Koreans discovered that a Princess of Ayodhya was married to Korean King Suro in the first century CE. Suro was the King of Kimhay kingdom or the present Korea. The Princess was married to the Korean King at the age of 16. The Koreans believe that the Princess was the mother of the descendants who unified various Korean kingdoms in the 7th century CE. Since the first century CE her descendants prospered and became the largest clan in Korea, known as the Karak, whose members had been highly distinguished people.
Ex-President of South Korea, Kim Dae-Jung (who died in 2009), believes that he is also a descendant of the Great Princess of Ayodhya.
She is regarded as the most blessed queen of Korea in the last 2,000 years, and Koreans believe that this could be due to the religious significance of the great temple city of Ayodhya where Lord Rama was born.
It is written in 11th-century Korean chronicle the Samguk Yusa, that the wife of King Suro of the ancient Korean kingdom of Geumgwan Gaya was a princess who traveled by boat from a faraway land called Ayuta to Korea in 48 AD.
Heo Hwang-ok (later named as Suro) is a legendary queen that mentioned in Samguk Yusa. She was the first queen of Geumgwan Gaya, and is considered the first queen of Gaya Kingdom.
People of Kimhae are fascinated by this link and also found that the symbol of Kaya Kingdom is two fishes kissing each other, which is similar to that of Mishra Royal family of Ayodhya.
Heo and Suro had 12 children, the eldest son was Kŏdǔng. She requested Suro to let two of the children bear her maiden surname. Legendary genealogical records trace the origins of several Heo clans to these two children: Kimhae (or Gimhae), Hayang, Taein, Hansan and Yangcheon. The Gimhae Kims trace their origin to the other eight sons. Overall, more than six million Koreans trace their lineage to Queen Heo, however, in Indian history, no records are found of this legend. The other two were female and were married respectively to a son of Talhae and a noble of Silla.

The legend states that the queen died at the age of 157.
Now the entire Kara clan, which comprises over two-third of korean population are their descendants.
Korean government has declared Ayodhya as their sister-city and a monument in memory of princess Hoh was placed there.
The people in korea seem quite proud of their links with India, especially because Queen Suro gave rise to the Kim dynasty, a powerful family name in the country.

The monument in memory of Hwang Huh is built in Korean tradition using a three-metre high stone weighing 7,500 kg, specially shipped from South Korea on picturesque banks of river Saryu in the holy city .The clan that descended from the Ayodhya princess Huh and South Korean King Suros, today known as Kim-Hae-Kim clan, has a little over six million Huh descendants in the Republic of South Korea.

The Kim-Hae-Kim clan has countless illustrious members including many presidents and premiers.


The memorial site in Ayodhya has become a place of pilgrimage for members of the clan. While unveiling the monument Bong Ho-Kim, president of the clan society, Republic of Korea had said: "Ayodhya being birthplace of our great Queen Huh, has acquired the status of a place for pilgrimage to over six million descendants."
In 48 AD, Queen Suro or Princess Heo Hwang-ok is said to have made a journey from Lord Ram's birthplace to Korea by sea, carrying a stone which calmed the waters. The stone is not found anywhere in Korea and is now a part of crucial evidence that the princess belonged to the city of Ayodhya in India.

This stone is only found in India, proof that it came from there to Korea," said Song Weon Young, city archeologist of Kimhae, a city near the big industrial town of Pusan. People of Kimhae were so fascinated by these links that they started research on it several years ago.

They also ran into a symbol of the Kaya Kingdon with two fish kissing each other, similar to that of the Mishra royal family in Ayodhya. The Princess is said to have given birth to 10 children, which marked the beginning of the powerful dynasty of Kimhae Kims. Kim Dae Jung, a former President also belongs to the same family name.


According to a history book written in the 11th century in Korean language, “History of Three Kingdoms”, in the year 48 AD, an Indian princess by name Hur Hwang-ho (her Korean name), came to Korea from Ayodhya and married King Kim Suro of the ancient Korean Kingdom of Kaya which is now the Kimhae city. Kimhae City is the birthplace of this kingdom and thus has a historical link with Ayodhya. The clan of Kimhae Kims wants to perpetuate this memory.
Link- TIMES OF INDIA
Link to my earlier article
Posted by Decoding Hinduism Pradeep Singh at 8:25:00 PM No comments: Links to this post

As per the history, around 2000 years ago, Indian princess - Suriratna from Ayodhya travelled to South Korea and married a Korean King - Kim Suro. The story goes that Suriratna, a princess of Ayodhya, journeyed with her brother to Kimhae in what is now Korea in 48 AD to marry a king there after gods appeared to her father in a dream. The princess, renamed Huh Hwang after her marriage to King Suro, had 10 children and established the Kim or Karak clan.
The clan today has around 6 million members in South Korea — 12% of the country's population — and includes former president Kim Dae Jung; former prime ministers Heo Jeong and Kim Jong-pil; Kim Yoon-ok, the wife of former president Lee Myung-bak; and the Korean ambassador to New Delhi, Joon-gyu Lee. When some members of the Korean clan read about the legend in Samguk Yusa, an 11th century Chinese-language memoir of the three kingdoms in Korea, they decided to explore the connection. In the late 1990s they got in touch with the Ayodhya administration and with Bimlendra Pratap Mohan Mishra, a descendant of Ayodhya's erstwhile royal family.
Interestingly, Queen Huh's tomb in South Korea has a pagoda in frontage, which is built with stones and believed to have brought from Ayodhya.
On the other hand, a monument has been built in memory of Hwang Huh on the picturesque banks of river Saryu in Ayodhya. Built in Korean tradition, the monument has a three-metre high stone weighing 7,500 kg. 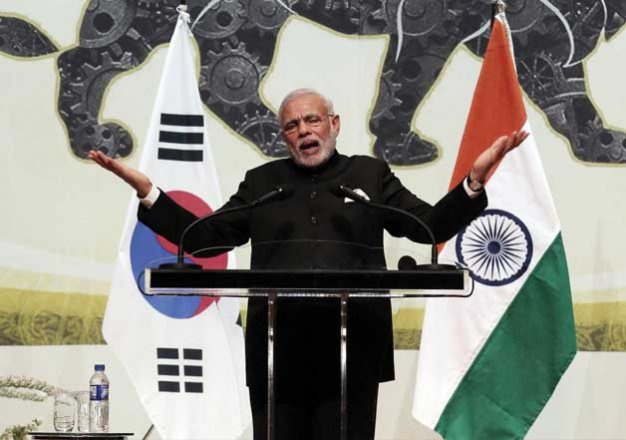 Revival of this unique cultural connection between the two countries, while Indian Première Narendra Modi is on visit to South Korea, can help forge stronger diplomatic as well as economic relations.
Bimlendra Pratap Mohan Mishra, a descendant of Ayodhya's royal family, meets with Kim clan members.
But the clan had done its homework and was convinced that the queen migrated from Rama's capital. Besides documentary proof, it had two other pieces of evidence that pointed toward Ayodhya. First, the queen carried stones with her to balance her ship. These stones are not found in Korea and date back to India.
Second, the dynasty of the queen and king had a pair of fish as its symbol. Mishra's forefathers had the same emblem and you can see the image of the fish pair on several ancient structures in and around Ayodhya. It is considered a good omen.
The Korean clan constructed a memorial for the queen in Ayodhya in 2010 and members now visit the site in March of every year to pay homage to their "great-great grandmother". Kimhae, located in the southern part of Korea with a population of around 520,000, established a sister-city association with Ayodhya in 2010.
The memorial to Queen Huh in Kimhae.
A delegation comprising prominent people including Bimlendra Pratap Mohan Mishra from Ayodhya has even visited Kimhae at the invitation of the clan. But Mishra said previous Indian and Korean governments never pursued the connection seriously in the context of economic and cultural ties.
However, the new government of Prime Minister Narendra Modi is keen on using the link to bolster ties between Seoul and New Delhi. It has already offered to renovate Queen Huh's memorial in Kimhae City.
The government of Uttar Pradesh state, meanwhile, has been persuaded by Delhi to refurbish the queen's memorial and other historic monuments in Ayodhya at a cost of around 60 million rupees. It is also in the process of beautifying the park where the memorial stands.
Uttar Pradesh Chief Minister Akhilesh Yadav recently met Hyeon Dong-hwa, who has lived in India since 1954 and has been associated with the Korean clan's work in Ayodhya since the beginning.
Hyeon feels apart from the Ayodhya legend, Buddhism has potential to bring India and Korea closer. He wants India, Korea and Thailand to develop an axis as Ashoka, a king from India, in the third century BC sent monks to Korea as well as Thailand to promote Buddhism.
In Uttar Pradesh, meanwhile, chief minister Yadav has also invited the president of the Karak Clan Society to visit the state. As well, he wants to use the connection to woo Korean investment to his state, particularly in Noida, a city adjoining New Delhi.
Ambassador Lee frequently invokes the "Korean-Indian" parentage of his forefathers to further his country's interests in New Delhi. Last month, he took a 60-member delegation of Korean entrepreneurs to Gujarat, the home state of Prime Minister Modi, to explore increased Korean investment there.
Addressing a Korea-Gujarat friendship forum, the ambassador traced his lineage to Ayodhya, saying that one quarter of all Koreans were descendants of the Korean-Indian couple.
Last month, two Korean warships docked for four days in Chennai, the capital of Tamil Nadu state in southern India. The ships Choi Young and Cheonji were believed to have followed the route taken by the Ayodhya princess.
source-http://www.indiatvnews.com/politics/national/modi-lord-rama-ayodhya-connection-south-korea-29350.html
http://www.bangkokpost.com/print/454401/
http://timesofindia.indiatimes.com/india/Prasad-finds-clues-to-promote-Ayodhya-in-Korean-history/articleshow/44928969.cms
http://www.business-standard.com/article/news-ani/india-south-korea-to-upgrade-monument-for-queen-suriratna-hur-hwang-ok-in-ayodhya-115051801084_1.html
Posted by Decoding Hinduism Pradeep Singh at 8:57:00 PM No comments: Links to this post