Bhavishya Puran Muhammad : tripurasur
Shri Suta Gosvami said: In the dynasty of King Shalivahana, there were ten kings who went to the heavenly planet after ruling for over 500 years. Then gradually the morality declined on the earth. At that time Bhojaraja was the tenth of the kings on the earth. When he saw that the moral law of conduct was declining he went to conquer all the directions of his country with ten-thousand soldiers commanded by Kalidasa. He crossed the river Sindhu and conquered over the gandharas, mlecchas, shakas, kasmiris, naravas and sathas. He punished them and collected a large ammount of wealth. Then the king went along with Mahamada (Muhammad), the preceptor of mleccha-dharma, and his followers to the great god, Lord Shiva, situated in the desert. He bathed Lord Shiva with Ganges water and worshipped him in his mind with pancagavya (milk, ghee, yoghurt, cow dung, and cow urine) and sandalwood paste, etc. After he offered some prayers and pleased him.
Suta Goswami said: After hearing the king’s prayers, Lord Shiva said: O king Bhojaraja, you should go to the place called Mahakakshvara, that land is called Vahika and now is being contaminated by the mlecchas. In that terrible country there no longer exists dharma. There was a mystic demon named Tripura(Tripurasura), whom I have already burnt to ashes, he has come again by the order of Bali. He has no origin but he achieved a benediction from me. His name is Mahamada(Muhammad) and his deeds are like that of a ghost. Therefore, O king, you should not go to this land of the evil ghost. By my mercy your intelligence will be purified.Hearing this the king came back to his country and Mahamada(Muhammad) came with them to the bank of the river Sindhu. He was expert in expanding illusion, so he said to the king very pleasingly: O great king, your god has become my servant. Just see, as he eats my remnants, so I will show you. The king became surprised when he saw this just before them. Then in anger Kalidasa rebuked Mahamada(Muhammad) “O rascal, you have created an illusion to bewilder the king, I will kill you, you are the lowest…”
That city is known as their site of pilgrimage, a place which was Madina or free from intoxication. Having a form of a ghost (Bhuta), the expert illusionist Mahamada(Muhammad) appeared at night in front of king Bhojaraja and said: O king, your religion is of course known as the best religion among all. Still I am going to establish a terrible and demoniac religion by the order of the Lord . The symptoms of my followers will be that they first of all will cut their genitals, have no shikha, but having beard, be wicked, make noise loudly and eat everything. They should eat animals without performing any rituals. This is my opinion. They will perform purificatory act with the musala or a pestle as you purify your things with kusha. Therefore, they will be known as musalman, the corrupters of religion. Thus the demoniac religion will be founded by me. After having heard all this the king came back to his palace and that ghost(Muhammad) went back to his place.
The intelligent king, Bhojaraj established the language of Sanskrit in three varnas – the brahmanas, kshatriyas and vaisyas – and for the shudras he established prakrita-bhasha, the ordinary language spoken by common men. After ruling his kingdom for 50 years, he went to the heavenly planet. The moral laws established by him were honored even by the demigods. The arya-varta, the pious land is situated between Vindhyacala and Himacala or the mountains known as Vindhya and Himalaya. The Aryans reside there, but varna-sankaras reside on the lower part of Vindhya. The musalman people were kept on the other side of the river Sindhu.
On the island of Barbara, Tusha and many others also the followers of Isamsiha were also situated as they were managed by a king or demigods.

Lord Shiva said: O king Bhojaraja, you should go to the place called Mahakakshvara, that land is called Vahika and now is being contaminated by the mlecchas. In that terriblecountry there no longer exists dharma. There was a mystic demon named Tripura(Tripurasur), whom I have already burnt to ashes, he has come again by the order of Bali. He has no origin but he achieved a benediction from me. His name is Mahamada(Muhammad) and his deeds are like that of a ghost.
According to Bhavishya Purana Muhammad was the rebirth of Tripurasura the Demon. Tripurasura was killed by Shiva in his(Tripurasura’s) past life.

Tripurasur was the son of Sage Gritsamad. One day the sage sneezed and from this was created a young boy who the Sage brought up as his own son. The sage taught the boy the Ganana Twam, Ganesh Mantra. Equipped with this mantra the boy meditated intensely on Lord Ganesh who ultimately blessed him. He was given three pura-s of gold silver and iron. Since he was the owner of these three pura-s he was given the name Tripur. Ganesh also bestowed on Tripur to be the most powerful, who none but Lord Shiva himself could destroy and after being destroyed by Lord Shiva he would attain mukti-salvation.
This boon made Tripur proud and he brought havoc in the entire world. He conquered the Nether world and then proceeded to takeover Heaven. He defeated Indra the king of heaven. His aggression made Lord Brahma hide in a lotus and Lord Vishnu in the Shirsagar. He soon also took over Lord Shiva’s Kailash Parvat and thus became the King of all the three worlds. The gods wondered on how to vanquish Tripurasur. Lord Narada told them that, since he had been granted a boon by Lord Ganesh himself it would be very difficult to vanquish him. He advised them to meditate on Lord Ganesh. Pleased Lord Ganesh decided to help the Gods.
Disguised as brahmin he visited Tripurasur and told him that he was a very enlightened Brahmin and could make for him three flying planes. Riding these he woud be able to go anywhere he wished within minutes. The planes could only be destroyed by Shiva.In return Lord Ganesh asked him to get him the statue of Chintamani which was at the Kailash Mountain. Lord Shiva refused to give the statue to Tripurasur’s messenger. The angry Tripurasur himself went to get the statue. A fierce battle started between him and Lord Shiva. He destroyed everything that belonged to the Lord Shiva who too retired to the Girikandar.
Lord Shiva too realized that he was unable to destroy Tripurasur because he had not paid his respects to Lord Ganesh. He recited the Shadaakshar Mantra to invoke Ganesh. On doing so from his mouth emerged Gajanan to grant Shiva a boon. Shiva continued his invocation of Ganesh who ultimately directed him on how Tripurasur could be killed. Lord Shiva was asked to recite the Sahastranam and then direct an arrow at the three pura-s of Tripurasur. Lord Shiva followed these instructions and finally vanquished Tripurasur.
The place where Lord Shiva invoked Lord Ganesh he also created a temple for him. The town surrounding this temple was called Manipur. The village Ranjangaon is considered to be the place where Lord Shiva himself sought the blessings of Ganesh and ultimately destroyed Tripurasur.
This prayer (chalisa) praises the Lord Shiva (Related to Tripurasura killing)
Tripurasur sang yuddha machayi,
sabahin kripa kari leen bachayi.
By fighting and killing the Demon Tripurasur,
You forgave everybody and saved the Gods.
Mlechha (meaning)
(from Sanskrit dictionary) 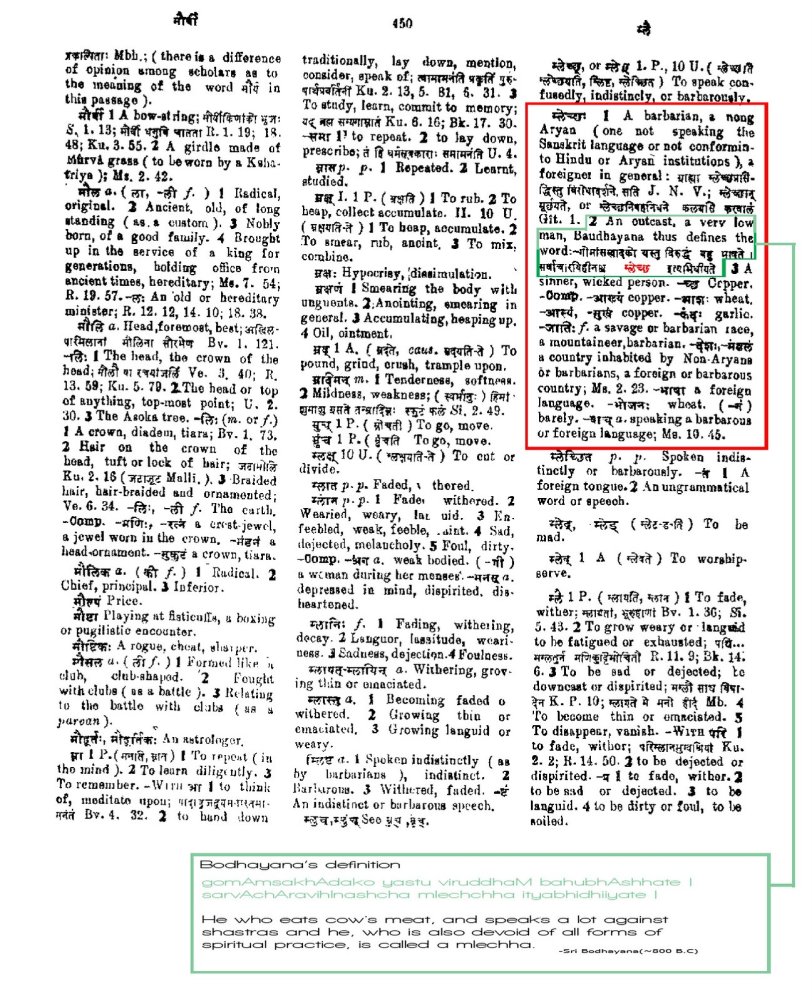 म्लेच्छ mleccha 1 A barbarian,a non Aryan ( One not speaking the Sanskrit Language or not conform in to Hindu or Aryan institutions),a foreigner in general

2 An Outcast, a very low man, Bodhayana thus defines the word:
gomAmsakhAdako yastu viruddhaM bahubhAshhate | sarvAchAravihInashcha mlechchha ityabhidhiiyate |
He who eats cow’s meat, and speaks a lot against shastras and he, who is also devoid of all forms of spiritual practice, is called a mlechha.
3 A sinner, A wicked person, A savage or barbarian race
etc… 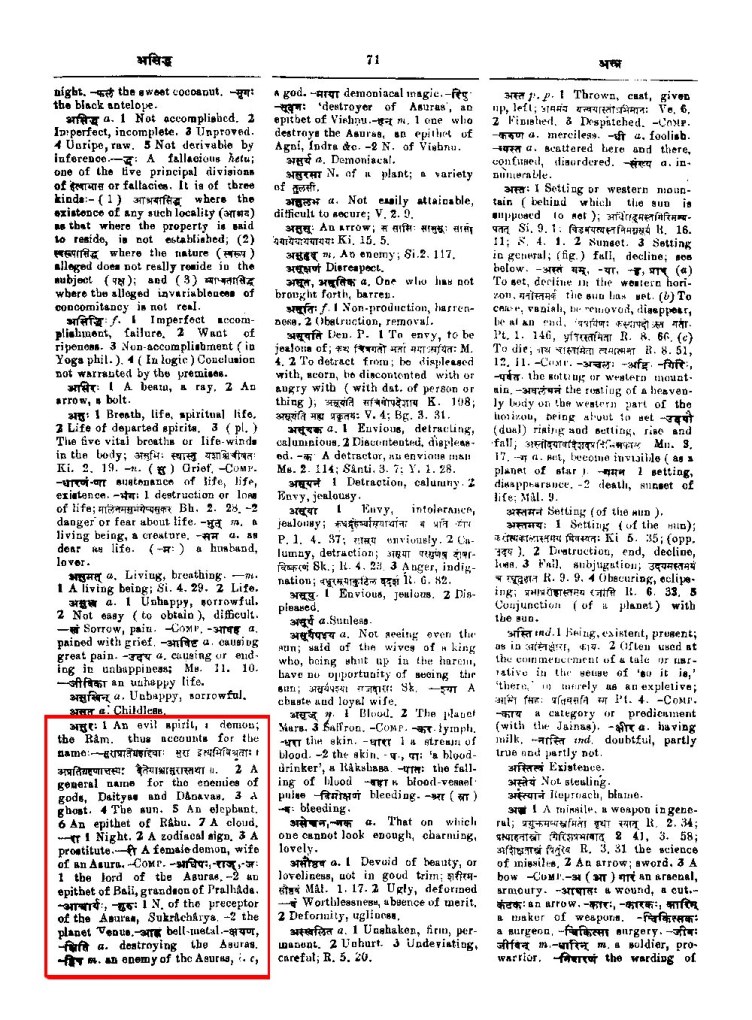 Asura असुर
1 An evil spirit,demon
2 A general name for the enemies of Gods,
Posted by Decoding Hinduism Pradeep Singh at 3:47:00 PM