SWASTIKA ORIGINATED IN INDIA >15000 YRS AGO TO ALL OVER WORLD

The swastika symbol originated in India  and oldest swastika is 15,000 years ago.
Swastika is a Sanskrit word. SU means "good" ASTI means " to be "However, it is also known by different names in different countries - like ‘Wan’ in China, ‘Manji’ in Japan, ‘Fylfot’ in England, ‘Hakenkreuz’ in Germany and ‘Tetraskelion’ or ‘Tetragammadion’ in Greece.
Lord Shiva, gave the language Sanskrit to the Vedic civilization millions of years ago(not 10000 yrs ago).
The earliest swastika ever found was uncovered in Mezine, Ukraine, carved on an ivory figurine, which dates an incredible 12,000 years, and one of the earliest cultures that are known to have used the Swastika was a Neolithic culture in Southern Europe, in the area that is now Serbia, Croatia, Bosnia and Herzegovina, known as the Vinca Culture, which dates back around 8,000 years LINK

Swastika with Ganesha inset was found on Mohenjodaro and Harappan pottery of 3500BC ( Indus valley civilisation ).

On the walls of the Christian catacombs in Rome, the symbol of the Swastika appears next to the words “ZOTIKO ZOTIKO” which means “Life of Life”. It can also be found on the window openings of the mysterious Lalibela Rock churches of Ethiopia, and in various other churches around the world
Archeologist Heinrich Schliemann found the Swastika symbol at Troy, where the Trojan war was fought in 1200 BC, there has been great western interest in the Swastika symbol .
The Russian Stonehenge more grander and much older than the British Stonehenge was unearthed at Arkaim, Cheliabinsk, at the Urals. Putin went to visit the site, when they found the ancient Aryan Swastika symbol on unearthed pottery.
Buddha was an Indian. He adopted the left handed Swastika for his religion in 1900 BC.
In Hinduism the left handed Swastika is the symbol for terrifying Kali, the destroyer goddess-- as a Yang symbol for Ying.( Tamas / Rajas ).

The right handed Swastika is the second most important symbol for the Indian Hindu. The first is OM. OM is a sound carrier MANTRA.It represents the cosmic spinning vortex. Everything is energy. All energy is a vortex .
Swastika was a symbol of the Dryuhus ( Druids ) who migrated from Indian river Saraswati banks in 4000 BC. Druids are reputed to have built the British Stonehenge. All druid images have been unearthed in Vedic style meditative poses.
King Vikramaditya's hawks and homing pigeons ( fax machines of that age ) use to have a golden swastika royal seal strapped around their legs.


A HINDU PIOUS SIGN SWASTIKA WAS STOLEN BY GERMANS AS THEY DID TO MANY OTHER TECHNOLOGY FROM INDIA IN PAST AS SUFFERED DESTRUCTION.

Same swastika that was used in Ancient India and copied to Japan, even USA(Military used by American military unit in WW1, in 1935 .

German scholars translated many Ancient indian text and copied them. Not only that Ancient VIMAN , aeroplane was first used by Ancient India per texts written way back in India before Wright brothers but as before, they all broke copyright law and put their name. Now westerners are making a cry that somebody in China, India breaking their movie copyright? HUH.
The swastika, the Phoenician sun symbol, on the Phoenician Craig-Narget stone in Scotland, and on the robe of a Phoenician high priestess. (Source)

Links
The History of the Swastika
Reclaim the Swastika
Nazi Swastika or Ancient Symbol? Time to Learn the Difference
About Swastika
Swastika in South America
Related Books 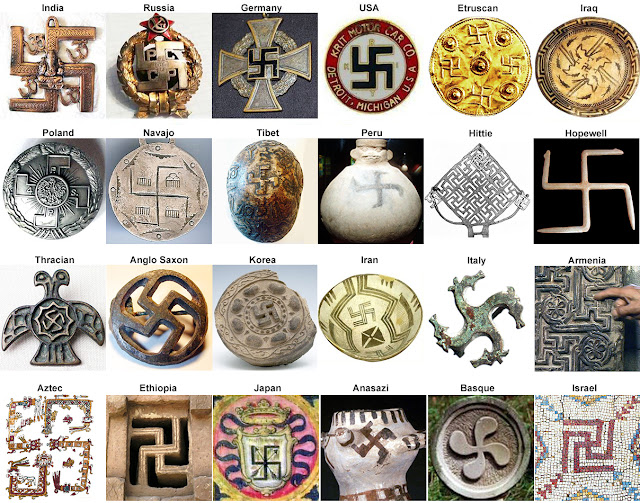 Related Videos
Posted by Decoding Hinduism Pradeep Singh at 10:57:00 AM