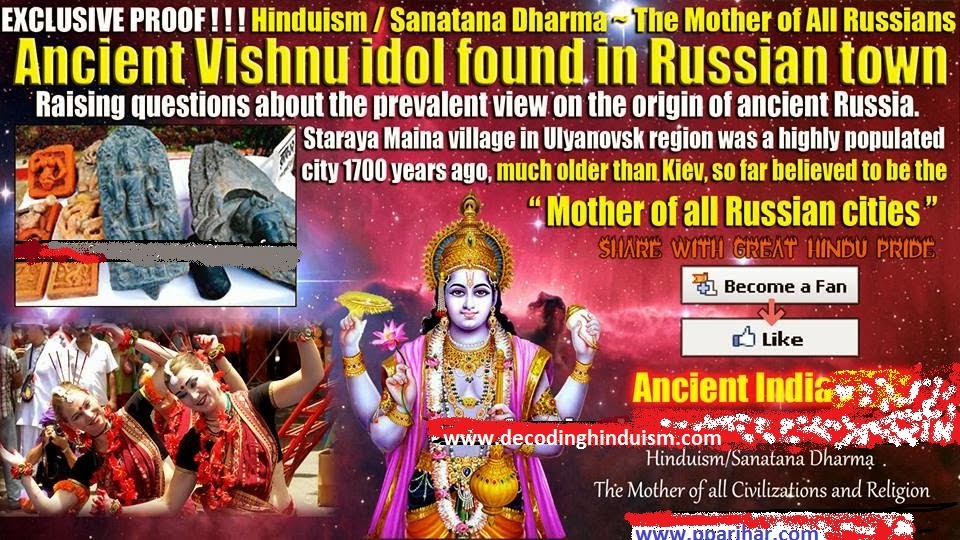 Raising questions about the prevalent view on the origin of ancient Russia.Staraya Maina village in Ulyanovsk region was a highly populated city 1700 years ago, much older than Kiev, so far believed to be the “ Mother of all Russian cities ” Which means the very orgin of RUSSIAN Civilization were Hindus settlers from Ancient India .

MOSCOW: An ancient Vishnu idol has been found during excavation in an old village in Russia's Volga region, raising questions about the prevalent view on the origin of ancient Russia.

The idol found in Staraya (old) Maina village dates back to VII-X century AD. Staraya Maina village in Ulyanovsk region was a highly populated city 1700 years ago, much older than Kiev, so far believed to be the mother of all Russian cities.

"We may consider it incredible, but we have ground to assert that Middle-Volga region was the original land of Ancient Rus. This is a hypothesis, but a hypothesis, which requires thorough research," Reader of Ulyanovsk State University's archaeology department Dr Alexander Kozhevin told state-run television Vesti .

Dr Kozhevin, who has been conducting excavation in Staraya Maina for last seven years, said that every single square metre of the surroundings of the ancient town situated on the banks of Samara, a tributary of Volga, is studded with antiques.

Prior to unearthing of the Vishnu idol, Dr Kozhevin has already found ancient coins, pendants, rings and fragments of weapons.

He believes that today's Staraya Maina, a town of eight thousand, was ten times more populated in the ancient times. It is from here that people started moving to the Don and Dneiper rivers around the time ancient Russy built the city of Kiev, now the capital of Ukraine.
The legacy of this ancient village, can radically change the history of ancient Russia.
Hinduism/ Sanatana Dharma The Mother of all Civilizations and Religion

Email ThisBlogThis!Share to TwitterShare to FacebookShare to Pinterest
Labels: hinduism in ancient russia