Petra , an ancient city , which belonged to the Greeks earlier,excavated in Jordan is considered as one of the wonders of the world. 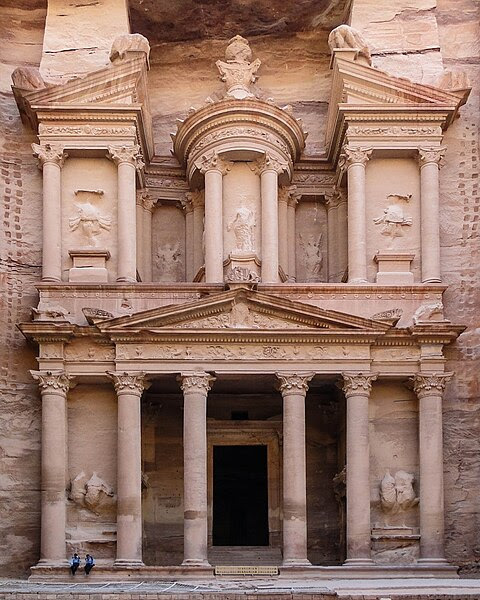 Al Khazneh,Petra Image source Wikimedia Commons.
This city had the imprint of Constantine as well.
‘In a recently conducted Internet poll, Petra was voted by internet users as one of the ‘seven wonders of the modern world’. In this abandoned city, which lies hidden behind impenetrable mountains and gorges, magnificent rock-cut temples and palaces have been carved into towering cliffs of red and orange sandstone. The most famous of these structures is the ‘Al Khasneh’ (or the ‘Treasury’), which was made famous in an Indiana Jones film.
Sometime during the 3rd century BC, the Nabataeans began to decorate their capital city with splendid rock-cut temples and buildings. [Right: The Khasneh or "Treasury"] Their economic prosperity and architectural achievements continued unabated even after they came under the control of the Roman Empire in 106 CE. The neglect and decline of Petra started soon after Emperor Constantine declared Christianity as the official religion of the Roman Empire in 324 CE. A series of earthquakes crippled the region in the 7th – 8th centuries and Petra disappeared from the map of the known world, only to be rediscovered centuries later in 1812, by a Swiss explorer named Johann Burckhardt…

A baetyl physically marked a deity’s presence. It could be a square [Above, left] or rounded like a dome [Above, right]. Some baetyls’ were depicted with a lunar crescent on the top. The Nabataeans also appear to be snake worshippers. One of the most prominent structures in Petra is the snake monument, which shows a gigantic coiled-up snake on a block of stone. [Below]
Within the temple of Al Deir, the largest and most imposing rock-cut temple in Petra, is present an unworked, black, block of stone, like an obelisk, representing the most important deity of the Nabataeans — Dushara.

The term Dushara means ‘Lord of the Shara’, which refers to the Shara mountains to the north of Petra. The symbolic animal of Dushara was a bull. All over Petra, Dushara was represented symbolically by stone blocks.
At the entrance of Petra there are three massive standing blocks of stone, known as Djin blocks, which were sacred to the inhabitants. There are nearly 40 such Djin blocks present throughout Petra. In addition, at religious sites throughout the city, the Nabataeans carved a standing stone block called a baetyl, literally meaning ‘house of god’…

Petra remains
This unusual array of symbolic elements associated with the chief god of the Nabataeans, Dushara, may have confounded historians, but to anyone familiar with the symbolism of the Vedic deity Shiva, the similarities between Dushara and Shiva will be palpable.
Shiva is still worshipped all over India in the form of a black block of stone known as a Shiva Linga. A Shiva Linga, which is essentially a ‘mark’ or ‘symbol’ of Shiva, sometimes appears as an unworked block of stone, much like the idol of Dushara in the temple of Al Deir; but typically it is represented by a smooth, rounded stone which resembles some of the rounded, dome-shaped, baetyls that we find in Petra.

[Above, left: Idol of Al-Uzza, found in the Temple of the Winged Lions Middle: One of the two reliefs of lion of the Lion Triclinium in Petra, Jordan Right: Durga on a Lion, slaying Mahisarura who has taken the form of a bull. Aihole temple complex, Karnataka, dating from the 6th century CE.]
Shiva is also associated with the mountains; his residence is supposed to be in the Kailash Mountain in the Himalayas, to the north of India, where he spends most of his time engaged in rigorous asceticism. His symbolic animal is a bull, named Nandi, which is commonly depicted kneeling in front of the Shiva Linga. Pictorial depictions of Shiva always show a crescent-shaped moon in his matted locks, much like the lunar crescent that appears on top of certain baetyls in Petra; and on top of the Shiva Linga is present a coiled-up serpent, bearing a strong resemblance to the serpent monument of Petra. It is evident that Shiva and Dushara are symbolically identical, leaving little scope for doubt that Dushara must indeed be a representation of the Vedic deity Shiva.

At Petra, an elaborate processional way leads from the center of the city to the temple of Al Deir. In front of the temple there is a massive, flat, courtyard, capable of accommodating thousands of people. This has led historians to suggest that the Al Deir temple may have been the site of large-scale ceremonies. It is possible that this was a celebration of Dussehra, since Al-Uzza was the ‘goddess of the people’ and Dussehra is the celebration of the victory of the goddess over the forces of evil.
It is not unlikely that the presiding god of the Nabataeans, Dushara, may have obtained his name from the festival Dussehra. The cult of Shiva-Shakti represented the sacred masculine and feminine principles, and the worship of Shiva has always been inextricably linked with the celebrations of the divine feminine. Even now in rural Bengal in India, the final day of celebration of Dussehra (Basanti Puja) is followed by an exuberant worship of Shiva. For these people, it remains the most important festival of their annual religious calendar.
It is unclear to historians whether all the representations of the female goddess found in Petra refer to Al-Uzza or to the Nabataean goddess triad of Al-Uzza, Al-lat and Manat. Although it is has been supposed that the consort of Dushara may be Al-Uzza, the depictions of Al-Uzza in other places of Arabia do not support such an association.
Al-Uzza (the ‘Strong One’) was the goddess of the morning and evening star. Isaac of Antioch referred to her as Kaukabta, ‘the Star’. She was sometimes depicted riding a ‘dolphin’ and showing the way to sea-farers. She is, thus, the counterpart of the Indo-European goddess of dawn, Ostara, and the Vedic ‘Usas’.
In the Rig Veda, there are around 20 hymns dedicated to the Usas, the goddess of dawn, who appears in the east every morning, resplendent in her golden light, riding a chariot drawn by glorious horses, dispelling the darkness, awakening men to action, and bestowing her bounty and riches on all and sundry.
Source: including Images other than the top most from
http://www.viewzone.com/petra.html
Posted by Decoding Hinduism Pradeep Singh at 2:44:00 PM