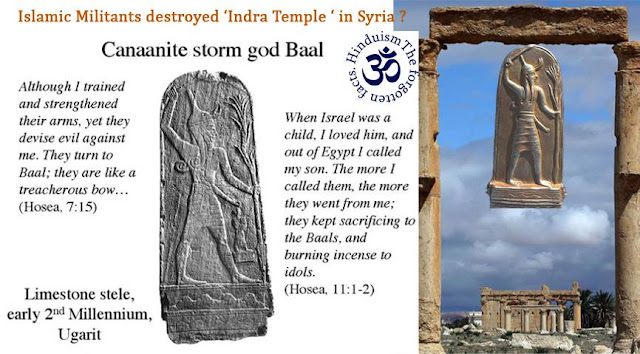 Newspapers around the world have flashed the news of destruction of the temple of Baal Shamin in Palmyra, Syria. Those who read about the attributes to Baal Shamin can easily see the similarities between Baal Shamin and the Vedic God Indra.

First of all, we must remember that Syria and Turkey were ruled by the Hindus once. We already know that the oldest archaeological evidence for Vedic Gods came from Bogazkoy in Turkey. We also know the Sanskrit names of Kings Dasaratha, Pratardhana etc who ruled Mitannian empire in the Middle East. All of them existed before 1400 BCE.

Baal is a common Semitic noun that means ‘lord’ or ‘owner’, but it occurs quite frequently in ancient texts as the proper name of an important god. Baal was one of the widely known deities in the west Semitic pantheon. He was associated with aspects of the natural world that were central to agriculture and society.

All these attributes are similar to Indra’s. We add Indra with lot of words such as Rajendra (Tamil Choza king), Khagendra (King of birds eagle), Mrgendra (King of Beasts Lion), Nagendra (King of Snakes) etc. Baal is cognate to Paala in Sanskrit meaning protector, maintainer, ruler, Lord etc. We have Go+pala, Indra pala, Raja pala.

In short Indra, Pala, Baal – all mean Ruler, Chief, Lord and one who maintains. Like Hindus add Pala or Indra or Eswar (Lord) with all local Gods, Middle East people added Baal with all the local gods. Baal Hadad was the most popular one.

Like we used Indra to mention a particular deity or used it as suffix to many more, they used ball as local manifestations of the god (Eg. Baal Sidon, Baal Shamin, Baal Hermon, Baal Peor), but it was also used in its general sense to refer to other deities as well.

Baal appears in Near Eastern texts in 3000 BCE, but he was best known from his prominent role in Ugaritic Literature (1250 BCE). The latter contains over 500 references to Ball, who was said to live on Mount Sapnu/Zaphon, north of Ugarit. It is like Mount Meru or Mount Kailash of Hindu literature.

Throughout the Ancient Near East, Ball was viewed as a Thunder God like Vedic Indra. He was associated with thunder, clouds, lightning and rain like Vedic Indra. As a Canaanite deity of weather and fertility, he was linked with the annual return of vegetation, similar to Indra Festival. From Nepal to Tamil Nadu, Indra Festival was celebrated 2000 years ago every year. Now Nepal and South East Asian countries only celebrate this as Water Festival every year.

Till the spread of Christianity in the 3rd or 4th century, Baal was worshipped. In numerous passages the Bible records a long term, intense animosity towards Baal and those who worshipped this deity (eg. Numbers 25; Judges 6; I Kings 18; Hosea 2 in the Bible). Later Baal’s attributes merged with Yahweh (Psalm 68:4) where Yahweh was said to ride on the clouds and to manifest his power into thunderstorm (Psalm 29).

In short, the concept of Nature God found in Rig Veda, the oldest literature in the world, spread to various parts of the Middle East and took its own forms in the course of 2000 years.

Baal Shamin was built in 17 AD in Palmyra and it was expanded under the reign of Roman emperor Hadrian in 130 AD.

Known as the “Pearl of the desert”, Palmyra, which means City of Palms, is a well-preserved oasis 210 kilometres (130 miles) northeast of Damascus.

Its name first appeared on a tablet in the 19th century BC as a stopping point for caravans travelling on the Silk Road and between the Gulf and the Mediterranean.

But it was during the Roman Empire — beginning in the first century BC and lasting another 400 years — that Palmyra rose to prominence.

Before the arrival of Christianity in the second century, Palmyra worshipped the trinity of the Babylonian god Bel, as well Yarhibol (the sun) and Aglibol (the moon).

Baal Samin was first mentioned in a treaty between the Hittite king Suppiluliuma and Nigmadu II of Ugarit. His epithets include Lord Of Eternity. He leads the list of deities like the Vedic God Indra. By Hellenic times he was equated with Zeus in the Greek pantheon and Caelus (sky) in the Roman pantheon. Zeus is Indra according to several scholars.
— with Srilan Srisukumaran.
Posted by Decoding Hinduism Pradeep Singh at 12:58:00 PM