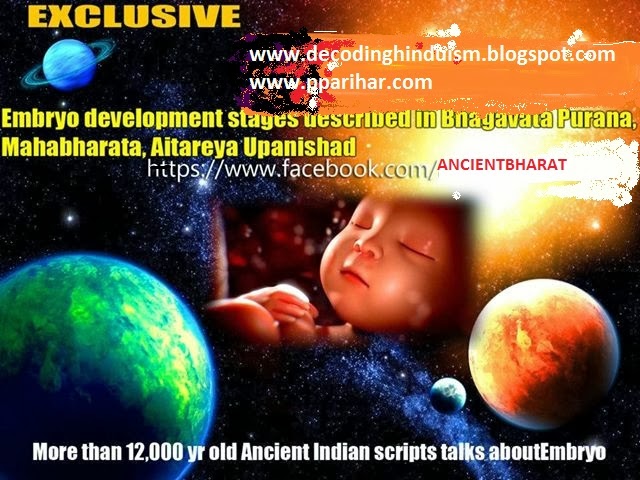 Embryo development stages described in Bhagavata Purana, Mahabharata, Aitareya UpanishadEmbryology is the science of development of an embryo from the fertilization of the ovum to the fetus stage.The earliest scientific approach is credited to Aristotle (384 – 322 BC), but indians have done a lot of scientific work, long before Aristotle. Kapil Muni was probably the first man who studied embryo.
Ancient Indian rishis had discovered the body secretions, which reproduce and called them Raja (ovum) and Reta (sperm).
The Mahabharata, Shanti Parva, 301, 320, 331, 356, and the Bhagawata 3/31 state that one fine particle of Shukra conjugates with that of Shonit during copulation. The fine particles are sperm and ovum. They termed the conjugate product as ‘Kalala’, whereas modern science terms it as ‘Zygote’ or fertilized ovum.
Bhagawata states that only in one night, which means 12 hours’ time, from the coitus, Kalala forms.
Science admits that an ovum remains fertilizable for a short time, measured in hours, after its release from ovary.

Translation : On the first night, the sperm and ovum mix, and on the fifth night the mixture ferments into a bubble. On the tenth night it develops into a form like a plum, and after that, it gradually turns into a lump of flesh or an egg.

Bhagavata Purana describes all the microscopic changes taking place up to 15 days of the embryonic life, in a womb of a living woman. Science has 2 used microscopes, uterine wash-outs, post-mortem examinations, etc and arrived at same conclusion.

In the course of a month, a head is formed, and at the end of two months the hands, feet and other limbs take shape. By the end of three months, the nails, fingers, toes, body hair, bones and skin appear, as do the organ of generation and the other apertures in the body, namely the eyes, nostrils, ears, mouth and anus.

Within four months from the date of conception, the seven essential ingredients of the body, namely chyle, blood, flesh, fat, bone, marrow and semen, come into existence. At the end of five months, hunger and thirst make themselves felt, and at the end of six months, the fetus, enclosed by the amnion, begins to move on the right side of the abdomen.

In the 7th month the soul of embryo remembers everything about its past lives and also gets knowledge about the present life. Science cannot demonstrate this fact, but it can be inferred indirectly. The foetus of 7th month is viable, so its brain must be functioning in the 7th month.
Electro-encephalographic tracings of the foetus may prove this in future.

Kapil Muni describes that the foetus lies with complete flexion of its back and head. It is a fact and is scientifically proved.
He also said that the foetus is unable to do respiration. This is also true, because the foetus lies in the amniotic fluid and requires no breathing. The foetus gets oxygen and nourishment from the mother’s blood.
Kapil Muni also says that in the 10th month the foetus is forced down by Prasooti Vayu, through the maternal passage.
During this process of delivery, the foetus gets lot of troubles and loses its past memory.
Science cannot give any proof for the loss of memory, but we can assess it by the fact that during delivery foetal head is compressed to a great extent.
It may compress the brain, which in turn, may cause loss of memory. It is a proved fact that compression and concussion of human brain causes loss of memory.

In 1972, Dr. H.P.Robinson of Glasgow University, showed using ultrasonic Doppler technique, that the heart begins at about 12-14 weeks.
Bhagavata Purana states that two ears develop and gets knowledge of sound and directions. Two separate functions are attributed to the ears, clearly. It is proved true during 1936 when Ross and Tait published their paper showing that the directions are recognized by the Labyrinth, situated in the Internal ears.
Aitereya Upanishad (1/1/4 and 1/2/4, written in 6000 BC) mentions the same fact.

Modern science discovery has shown that 23 chromosomes of a sperm join with those of an ovum and then an embryo forms.
Chromosomes are called as Gunawidhi in bhagavata purana and mahabharata because they control Guna (characters) and Widhi (functions).

Ancient Indian sages revealed that Jeevatma(soul) is not perishable. At the time of death, it leaves the physical body and goes to Bhuvarloka. Then it comes down with rainwater, enters a food grain, goes in to a male and occupies a sperm.
With that sperm it enters the female and joins with an ovum to create an offspring. The sperm on which rides Atman gets success to win an ovum.
During one coitus 200 to 300 millions of sperms are deposited in a female passage.
Out of them only one enters an ovum. Why that one only? Science says it is a chance.
And why not a woman gets pregnant everytime she mates a man during her fruitful days ?

Embryo is the first descent of a fraction of Aatma. That part of Aatma is named as Praana.
Praana enters in and guides the sperm to enter an ovum.
So, only that single sperm which is driven by the child’s soul will enter woman’s womb.
Vedic Astrology has proved that it can derive the date of pregnancy, gender of child, date of delivery too, based on horoscopes of parents.
Posted by Decoding Hinduism Pradeep Singh at 7:28:00 AM