The Samrat yantra or the 'Supreme Instrument' is Jai Singh's most important creation. The instrument is basically an equinoctial sundial, which had been in use in one form or the other for hundreds of years in different parts of the world. In India, Brahmagupta (AD 598) describes Kartari yantra, an equinoctial sundial, which operates on the same principle as the Samrat. Jai Singh however, turned the simple equinoctial sundial into a tool of great precision for measuring time and the coordinates of a celestial object.
The Jantar Mantar was the largest of the five Astronomical Observatories built by Jai Singh. The Samrat Yantra is the world's largest sundial, standing 27 meters (73 feet) high.The Samrat Yantra, pictured far right and in illustrations, below, is the largest sundial in the world. It’s gnomon rises over 73 feet above its base, and the marble faced quadrants, 9 feet in width, create an arc that reaches 45 feet in height.The primary object of a Samrat is to indicate the apparent solar time or local time of a place. On a clear day, as the sun journeys from east to west, the shadow of the Samrat gnomon sweeps the quadrant scales below from one end to the other. At a given moment, the time is indicated by the shadow’s edge on a quadrant.
The Jaipur observatory is the largest and best preserved of these. It has been inscribed on the World Heritage List as "an expression of the astronomical skills and cosmological concepts of the court of a scholarly prince at the end of the Mughal period" 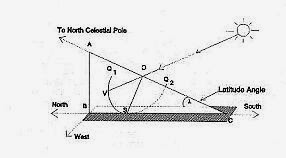 The above One shows the principle of a Samrat yantra.The instrument consists of a meridian wall ABC, in the shape of a right triangle, with its hypotenuse or the gnomon CA pointing toward the north celestial pole and its base BC horizontal along a north-south line. The angle ACB between the hypotenuse and the base equals the latitude lambda of the place. Projecting upward from a point S near the base of the triangle, are two quadrants SQ1 and SQ2 of radius DS. These quadrants are in a plane parallel to the equatorial plane. The center of the two 'quadrant arcs' lies at point D on the hyptenuse. The length and radius of the quadrants are such that, if put together, they would form a semicircle in the plane of the equator.

The tangential scale over Samrat gnomon. The scale indicates angle of declination. 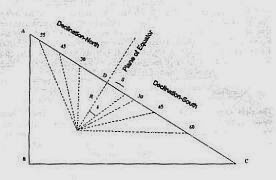 The quadrants are graduated into equal-length divisions of time measuring units, such as ghatikas and palas, according to the Hindu system, or hours, minutes and seconds, according to the Western system. The upper two ends Q1 and Q2 of the quadrants indicate either the 15-ghatika marks for the Hindu system, or the 6 A.M. and the 6 P.M. marks according the Western system. The bottom-most point of both quadrants, on the other hand, indicates the zero ghatika or 12 noon. The hypotenuse of the gnomon edge AC is graduated to read the angle of declination. The declination scale is a tangential scale in which the division lenghts gradually increase according to the tangent of the declination angle as illustrated in figure 2. The zero marking of this scale is at point D. Further, the gnomon scale AC is divided into two sections, such that the section DA reads angle of declination to the north of the celestial equator, and the section DC reads the declination to the south, as illustrated in the figure 2.
Samrat Yantra perspectives. The primary objective of a Samrat is to indicate the apparent solar time or local time of a place. On a clear day, as the sun journeys from east to west, the shadow of the Samrat gnomon sweeps the quadrant scales below from one end to the other. At a given moment, the time is indicated by the shadow's edge on a quadrant scale. 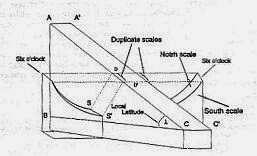 Email ThisBlogThis!Share to TwitterShare to FacebookShare to Pinterest
Labels: ASTROPHYSICS., The Samrat yantra