Glancing through some research material recently, I was pleasantly surprised to come across a reference to aKing Vikramaditya inscription found in the Kaaba in Mecca proving beyond doubt that the Arabian Peninsula formed a part of his Indian Empire.
The text of the crucial Vikramaditya inscription, found inscribed on a gold dish hung inside the Kaaba shrine in Mecca, is found recorded on page 315 of a volume known as ‘Sayar-ul-Okul’ treasured in the Makhtab-e-Sultania library in Istanbul, Turkey. Rendered in free English the inscription says:
“Fortunate are those who were born (and lived) during king Vikram’s reign. He was a noble, generous dutiful ruler, devoted to the welfare of his subjects. But at that time we Arabs, oblivious of God, were lost in sensual pleasures. Plotting and torture were rampant. The darkness of ignorance had enveloped our country. Like the lamb struggling for her life in the cruel paws of a wolf we Arabs were caught up in ignorance.

The entire country was enveloped in a darkness so intense as on a new moon night. But the present dawn and pleasant sunshine of education is the result of the favour of the noble king Vikramaditya whose benevolent supervision did not lose sight of us – foreigners as we were.

He spread his sacred religion amongst us and sent scholars whose brilliance shone like that of the sun from his country to ours. These scholars and preceptors through whose benevolence we were once again made cognisant of the presence of God, introduced to His sacred existence and put on the road of Truth, had come to our country to preach their religion and impart education at king Vikramaditya’s behest.”
For those who would like to read the Arabic wording I reproduce it hereunder in Roman script:

The destruction of idols at the Kaaba. Muhammad (top left and mounted at right) is represented as a flamingaureole. From Hamla-i haydarî (“Haydar’s Battle”), Kashmir, 1808.

A careful analysis of the above inscription enables us to draw the following conclusions:

An ancillary conclusion could be that the so-called Kutub Minar (in Delhi, India) could well be king Vikramadiya’s tower commemorating his conquest of Arabia. This conclusion is strengthened by two pointers. Firstly, the inscription on the iron pillar near the so-called Kutub Minar refers to the marriage of the victorious king Vikramaditya to the princess of Balhika. This Balhika is none other than the Balkh region in West Asia. It could be that Arabia was wrestled by king Vikramaditya from the ruler of Balkh who concluded a treaty by giving his daughter in marriage to the victor. Secondly, the township adjoining the so called Kutub Minar is named Mehrauli after Mihira who was the renowned astronomer-mathematician of king Vikram’s court. Mehrauli is the corrupt form of Sanskrit ‘Mihira-Awali’ signifying a row of houses raised for Mihira and his helpers and assistants working on astronomical observations made from the tower.

Having seen the far reaching and history shaking implications of the Arabic inscription concerning king Vikrama, we shall now piece together the story of its find. How it came to be recorded and hung in the Kaaba in Mecca. What are the other proofs reinforcing the belief that Arabs were once followers of the Indian Vedic way of life and that tranquillity and education were ushered into Arabia by king Vikramaditya’s scholars, educationists from an uneasy period of “ignorance and turmoil” mentioned in the inscription.


Cross section of the Kaaba with the black stone positioned in the corner, supported in a vagina shaped frame.
In Istanbul, Turkey, there is a famous library called Makhatab-e-Sultania, which is reputed to have the largest collection of ancient West Asian literature. In the Arabic section of that library is an anthology of ancient Arabic poetry. That anthology was compiled from an earlier work in A.D. 1742 under the orders of the Turkish ruler Sultan Salim.
The pages of that volume are of Hareer – a kind of silk used for writing on. Each page has a decorative gilded border. That anthology is known as Sayar-ul-Okul. It is divided into three parts. The first part contains biographic details and the poetic compositions of pre-Islamic Arabian poets. The second part embodies accounts and verses of poets of the period beginning just after prophet Mohammad’s times, up to the end of the Banee-Um-Mayya dynasty. The third part deals with later poets up to the end of Khalif Harun-al-Rashid’s times.
Abu Amir Asamai, an Arabian bard who was the poet Laureate of Harun-al-Rashid’s court, has compiled and edited the anthology.
The first modern edition of ‘Sayar-ul-Okul’ was printed and published in Berlin in 1864. A subsequent edition is the one published in Beirut in 1932.
The collection is regarded as the most important and authoritative anthology of ancient Arabic poetry. It throws considerable light on the social life, customs, manners and entertainment modes of ancient Arabia. The book also contains an elaborate description of the ancient shrine of Mecca, the town and the annual fair known as OKAJ which used to be held every year around the Kaaba temple in Mecca. This should convince readers that the annual haj of the Muslims to the Kaaba is of earlier pre-Islamic congregation.

The black stone (الحجر الأسود‎ al-Ḥajar al-Aswad) and frame is too similar to the Yoni (vagina) part of the Hindu Shiva Linga to be ignored. Hinduism extended far beyond India at the time of warlord Muhammad and was referred to as a pagan faith and was very likely active in a multi-faith region before it was Islamized through violence and occupation. In old Indian literature Hinduism is referred to as a “pagan” practice.
But the OKAJ fair was far from a carnival. It provided a forum for the elite and the learned to discuss the social, religious, political, literary and other aspects of the Vedic culture then pervading Arabia. ‘Sayar-ul-Okul’ asserts that the conclusion reached at those discussions were widely respected throughout Arabia. Mecca, therefore, followed the Varanasi tradition (of India) of providing a venue for important discussions among the learned while the masses congregated there for spiritual bliss. The principal shrines at both Varanasi in India and at Mecca in Arvasthan (Arabia) were Siva temples. Even to this day ancient Mahadev (Siva) emblems can be seen. It is the Shankara (Siva) stone that Muslim pilgrims reverently touch and kiss in the Kaaba.
Arabic tradition has lost trace of the founding of the Kaaba temple. The discovery of the Vikramaditya inscription affords a clue. King Vikramaditya is known for his great devotion to Lord Mahadev (Siva). At Ujjain (India), the capital of Vikramaditya, exists the famous shrine of Mahankal, i.e., of Lord Shankara (Siva) associated with Vikramaditya. Since according to the Vikramaditya inscription he spread the Vedic religion, who else but he could have founded the Kaaba temple in Mecca?


Mohammed’s massacre in Mecca.
A few miles away from Mecca is a big signboard which bars the entry of any non-Muslim into the area. This is a reminder of the days when the Kaaba was stormed and captured solely for the newly established faith of Islam. The object in barring entry of non-Muslims was obviously to prevent its recapture.
As the pilgrim proceeds towards Mecca he is asked to shave his head and beard and to don special sacred attire that consists of two seamless sheets of white cloth. One is to be worn round the waist and the other over the shoulders. Both these rites are remnants of the old Vedic practice of entering Hindu temples clean- and with holy seamless white sheets.
The main shrine in Mecca, which houses the Siva emblem, is known as the Kaaba. It is clothed in a black shroud. That custom also originates from the days when it was thought necessary to discourage its recapture by camouflaging it.
According to the Encyclopaedia Britannica, the Kaaba has 360 images. Traditional accounts mention that one of the deities among the 360 destroyed when the place was stormed, was that of Saturn; another was of the Moon and yet another was one called Allah. That shows that in the Kaaba the Arabs worshipped the nine planets in pre-Islamic days. In India the practice of ‘Navagraha’ puja, that is worship of the nine planets, is still in vogue. Two of these nine are Saturn and Moon.
In India the crescent moon is always painted across the forehead of the Siva symbol. Since that symbol was associated with the Siva emblem in Kaaba it came to be grafted on the flag of Islam.
Another Hindu tradition associated with the Kaaba is that of the sacred stream Ganga (sacred waters of the Ganges river). According to the Hindu tradition Ganga is also inseparable from the Shiva emblem as the crescent moon. Wherever there is a Siva emblem, Ganga must co-exist. True to that association a sacred fount exists near the Kaaba. Its water is held sacred because it has been traditionally regarded as Ganga since pre-Islamic times (Zam-Zam water).
[Note: Even today, Muslim pilgrims who go to the Kaaba for Haj regard this Zam-Zam water with reverence and take some bottled water with them as sacred water.]
Muslim pilgrims visiting the Kaaba temple go around it seven times. In no other mosque does the circumambulation prevail. Hindus invariably circumambulate around their deities. This is yet another proof that the Kaaba shrine is a pre-Islamic Indian Shiva temple where the Hindu practice of circumambulation is still meticulously observed. 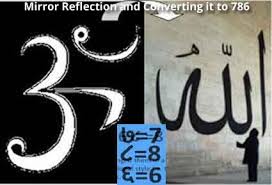