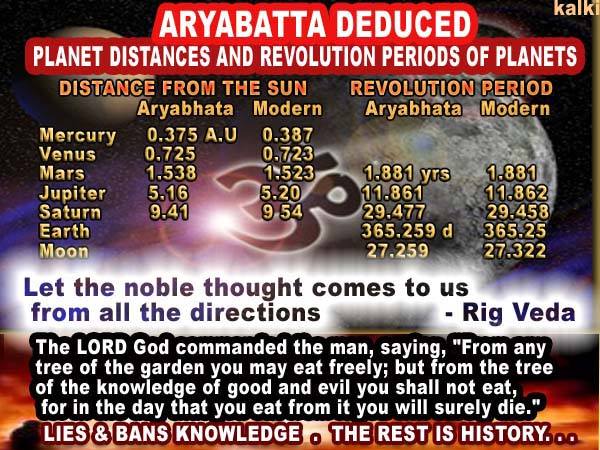 Aryabhatta (476-550 A.D.), one of the world’s greatest mathematician-astronomer, was born in Patliputra in Magadha, modern Patna in Bihar. Many are of the view that he was born in the south of India especially Kerala and lived in Magadha at the time of the Gupta rulers. However, there exists no documentation to ascertain his exact birthplace. Whatever this origin, it cannot be argued that he lived in Patliputra where he wrote his famous treatise the... "Aryabhatta-siddhanta" but more famously the "Aryabhatiya", the only work to have survived.

The mathematical part of the Aryabhatiya covers arithmetic, algebra, plane trigonometry and spherical trigonometry. It also contains continued fractions, quadratic equations, sums of power series and a table of sines. This work is the first we are aware of which examines integer solutions to equations of the form by = ax + c and by = ax - c, where a, b, c are integers. Aryabhatta was an author of at least three astronomical texts and wrote some free stanzas as well.

But his greatest contribution has to be ZERO, for which he became immortal. He certainly did not use the symbol, but the French mathematician Georges Ifrah argues that knowledge of zero was implicit in Aryabhata's place-value system as a place holder for the powers of ten with null coefficients. The supposition is based on the following two facts: first, the invention of his alphabetical counting system would have been impossible without zero or the place-value system; secondly, he carries out calculations on square and cubic roots which are impossible if the numbers in question are not written according to the place-value system and zero.

He already knew that the earth spins on its axis, the earth moves round the sun and the moon rotates round the earth. He talks about the position of the planets in relation to its movement around the sun. He refers to the light of the planets and the moon as reflection from the sun. Aryabhatta gives the radius of the planetary orbits in terms of the radius of the Earth/Sun orbit as essentially their periods of rotation around the Sun. He believes that the Moon and planets shine by reflected sunlight, incredibly he believes that the orbits of the planets are ellipses. He correctly explains the causes of eclipses of the Sun and the Moon.

This remarkable man was a genius and continues to baffle many mathematicians of today. His works was then later adopted by the Greeks and then the Arabs.

Bhaskara I who wrote a commentary on the Aryabhatiya about 100 years later wrote of Aryabhatta:-

"Aryabhatta is the master who, after reaching the furthest shores and plumbing the inmost depths of the sea of ultimate knowledge of mathematics, kinematics and spherics, handed over the three sciences to the learned world."

Aryabhata worked on the approximation for pi and may have come to the conclusion that is irrational. In the second part of the Aryabhatiyam (gaṇitapāda 10), he writes:

Posted by Decoding Hinduism Pradeep Singh at 8:55:00 AM