HISTORY OF GIANTS , TRUTH ? SEEK YOURSELF. 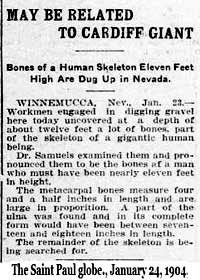 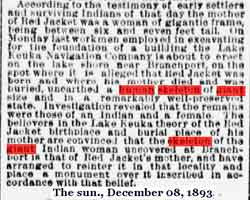 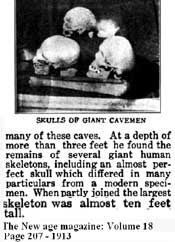 Pitcairn Island, New Zealand - 1934. "Local farmers are trying to hide pieces of a giant skeleton found near 'Christians cave'. Three of the men were later foun...d dead under strange circumstances. The forth man disappeared soon after this photo was taken and was never found. The photographer's identity has never been revealed.

A story on the front page of the April 5, 1909 edition of the Arizona Gazette recounted the discovery of a series of bizarre caves and artifacts in the Marble Canyon region of the Grand Canyon. The report claimed two Smithsonian-funded archaeologists, Prof. S. A. Jordan and G.E. Kinkaid, are responsible for the find. As the article noted:

(D)iscoveries which almost conclusively prove that the race which inhabited this mysterious cavern, hewn in solid rock by human hands, was of oriental origin, possibly from Egypt, tracing back to Ramses. If their theories are borne out by the translation of the tablets engraved with hieroglyphics, the mystery of the prehistoric peoples of North America, their ancient arts, who they were and whence they came, will be solved. Egypt and the Nile, and Arizona and the Colorado will be linked by a historical chain running back to ages which staggers the wildest fancy of the fictionist.

Later in the article, a cross-legged idol resembling Buddha is described along with a large tomb filled with mummified humans: a veritable mash-up of Egyptian and East Asian cultures.

A dangerous region to explore
Although this remote area of the Grand Canyon makes for perilous traveling, expeditions by private collectors and academics went forward. The site of Kincaid's discovery was roughly 42 miles away from El Tovar Crystal Canyon, and theArizona Gazette article noted that the cavern's entrance was 1500 feet down a sheer cliff.
This is not the easiest terrain to cover, but it's topography that could be overcome today. Conspiracy theorist John Rhodes claims to know the exact location of the caverns — the site is guarded today by a lone soldier carrying an M-16 and that the caverns are amuseum for civilization's shadowy elites. To make things even more bizarre, David Icke connects Kincaid's Grand Canyon discovery with reptilian overlords in his 1999 book The Biggest Secret.
Smithsonian denials
No record exists of Kincaid or Professor Jordan within the Smithsonian's Department of Anthropology, nor is there a paper trail at the Smithsonian detailing the artifacts gathered on the expedition. When asked directly about Kincaid's claims, a Smithsonian Institute

Posted by Decoding Hinduism Pradeep Singh at 6:14:00 AM