History with its flickering lamp,
Stumbles along the trail of the past;
Trying to reconstruct its scenes, to revive its echoes,
And re-kindle with pale gleams the passion of former days.

Nowhere is this observation more true than in the case of Hindu History. In tracing the roots of this ancient religion, we find ourselves floundering in the mists of time as there are few archeological evidences remaining that can corroborate the legends described in our ancient Puraans. 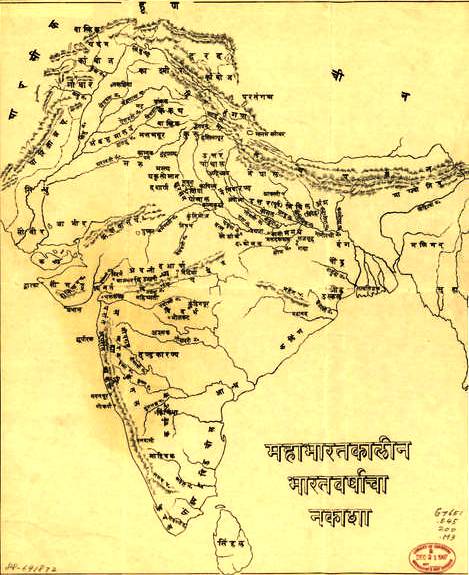 The many facets of Indian history mirror the Geographical, Racial, Linguistic and Cultural complexities of the vast  Indian sub-continent and as such are not very easy to decipher. However, it is abundantly clear that the chain of events extends way back into the pre-historic times..

That the Early Man, was present and thriving in the Indian heartland, is evident from the Cave-paintings of Bhimbetka in Madhya Pradesh. These paintings date from 40,000 BCE (earlier known as BC) and show the antiquity of human existence in this part of the world. 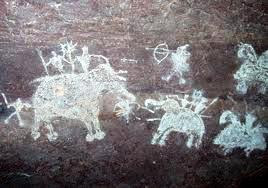 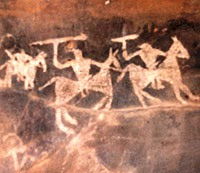 A large amount of information is available through literary evidence of the Hindu Vedas, Persian Avesta, regional literature and assorted accounts of travelers from both East and West  throwing ample light on different aspects of early Hindu civilization.

Through the analysis of these literary masterpieces and corroborating them with the evidence unearthed in recent excavations from Rajasthan and Gujarat in India and the North-western region of Pakistan have pushed back origins of  ancient Indian civilization by at least three millenia more!

Earliest sites of Civilization in the Indian sub-continent 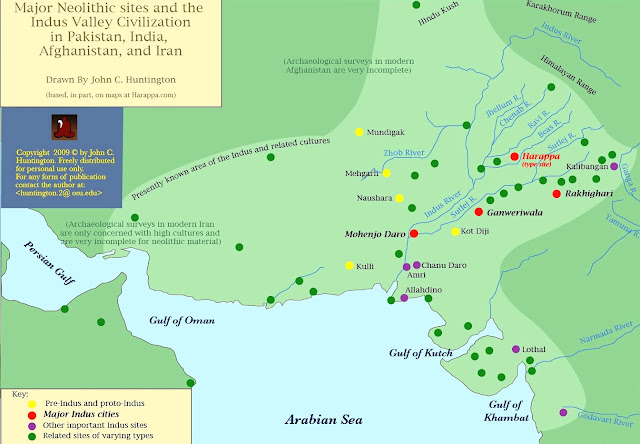 While the proto-cities excavated in Mehrgarh have been dated to around 6500 BCE, discoveries in the Gulf of Cambay, off the coast of Gujarat (where the fabled city of Dwarka was located), have revealed dates corresponding to 7500 BCE which is older than ANY other civilization in the World!

The 'Discovery' of Saraswati, the most glorified river in the Vedas, has given a huge boost to the efforts of finding a common ground between Hindu History and Mythology. The oft mentioned and much extolled river of ancient Hindu texts, was ironically not to be seen at all in modern India, and this had placed a great burden on scholars who endeavored to analyze the sacred texts from a historical view-point.

The Original course of Saraswati 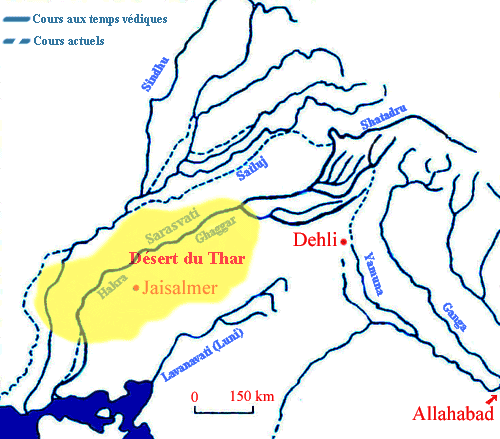 However, recent research carried out by international archaeologists has shed a great deal of light on the origin, course and final disappearance of the mighty river referred to as the 'Mother of all rivers' in the Rigveda and can even help date the scriptures to a large extent!

In the article titled {The Riddle of India's Ancient Past}, the French proto-historian Michel Danino believes there are strong links between the Veda and the Harappan culture.

'We find statues and seals depicting yogis and yogic postures, we find a Shiva-like deity, worship of a mother-goddess, fire altars, all of which are suggestive of Vedic culture. Harappan symbols include the Trishul, the Swastika, the Conch shell, the Peepal tree, all of which are central to later Indian culture. The Rig-Veda itself is full of references to fortified cities and towns, to oceans, sailing, trade and industry, all of which are found in the Harappan civilization.' 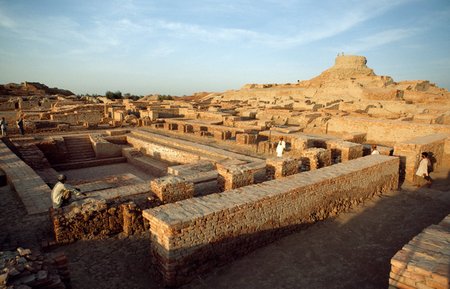 Vedic altars found in these sites re-affirm that the culture followed in these sites extending from Pakistan-Iran border in the West to Uttar Pradesh in the East; and Kashmir in the North to Godavari in the South was a part of Vedic culture.

Similarly, thoughts are echoed by David Frawley, the director of the American Institute of Vedic Studies, in the article {The Myth of Aryan Invasion},

'The term 'Destroyers of cities' was used to disregard the Vedic as a primitive non-urban culture that destroys cities and urban civilization. However, there are also many verses in the 'Rig Veda' that speak of the Aryans as having having cities of their own and being protected by cities upto a hundred in number.

Destruction of cities also happens in modern wars; this does not make those who do this nomads. The idea of Vedic culture as destroying but not building the cities is based upon ignoring what the Vedas actually say about their own cities.'

With the new insights available, even the nomenclature of the Indus Valley Civilization is no more apt as a majority of sites in later excavations fit perfectly along the banks of the newly discovered course of Saraswati. Some scholars have therefore started referring to it as the Indus-Saraswati Civilization. 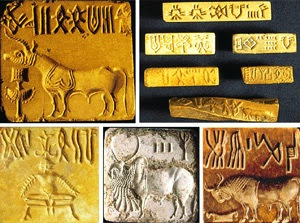 About this continuity of Indian civilzation, Jean Michel Varenne, a French Orientalist wrote in his book,{Yoga and the Hindu Tradition},

'The only remaining testimony to the prestigious civilization of ancient Egypt lay buried in archaeological remains; which meant that inhabitants of the Nile Valley had to wait for Champollion to decipher their hieroglyphics before they could know anything of the beliefs of their ancestors!!

Yet during all this time, Hindu families continued, and still continue today, to venerate the same Vishnu, who is celebrated in the hymns of the Rig Veda!'

Other scholars have tried to interpret the Astrological references in ancient literature and have come up with pretty conclusive dates. Verse 3.1.15 of the Taitreya Brahman describes Jupiter crossing the Pushya constellation thereby suggesting a date close to 4650 BCE.

Similarly, the Aitreya Brahman gives the date of 6000 BCE while the Rig Veda has references which throw up time-frames close to 10,000 BCE! One of the Medieval Islamic scholars, Al-biruni, lists many ancient Indian Astronomers who were well versed with the knowledge of both Space-science as well as Mathematics:

Other visitors like Hiun-Tsang, Fa-Hien and Megasthenes also left extensive accounts of life and its various nuances in ancient India. 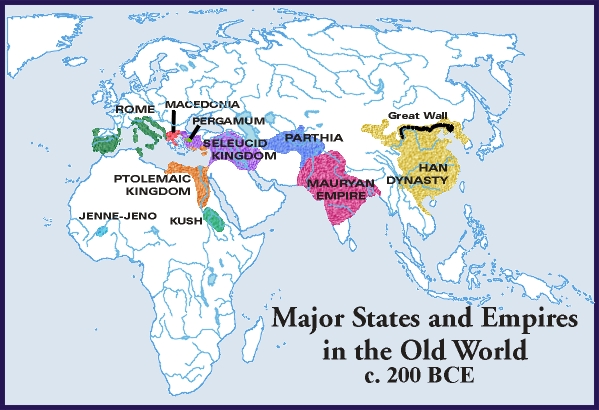 The actual dates of origin of the Indian civilization may yet be shrouded in the mists of time, but help has come from a totally unexpected branch of Science - Genetics.

According to the research findings such as MtDNA Haplogroup Study in Indian Peninsula and the Indian Genome Variation project, Indian sub-continent saw the first wave of migration of humanity out of Africa, directly into India about 50,000 years ago! It was from here that waves of people migrated to other parts of Asia as well as the continents of Europe and America!

The results also indicate that there has never been an  Aryan invasion NOR Migration INTO India. Our present genetic diversity evolved as waves of initial settlers in the central regions moved towards both north as well as south of the country, all the time intermixing and migrating to other countries.


The new picture that emerges from this mounting data of evidence is of a continuous stream of Civilizational History:


The above dates are approximations based on the current dating of scriptures and archeological finds and may yet be revised if new evidence comes to light. It is time we as Human-beings realize and accept our ancient History so that we can be ready to Embrace our Destiny; Let us together Begin at the Beginning.