AUM - In the beginning was the Word. 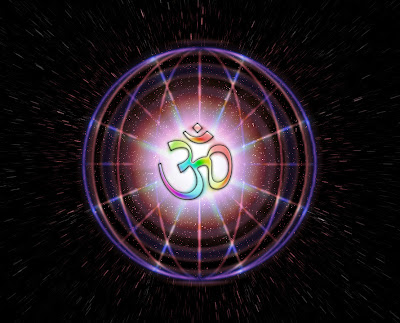 In Hindu belief, creation started with the Divine Syllable - Om. Knowledge was one of the first creations to take place. It is supposed to have radiated from the Mind of Lord Vishnu to that of Lord Brahma and ultimately emanate from his mouth in the form of Vedas.
The tree of knowledge that we call Hinduism is so dense that an uninitiated reader may get lost in its complexities and detail. Hindu texts abound with highly intellectual philosophies with conceptions of impressive range and depth. In one of the most beautiful examples of Vedic thought process, I'm presenting a verse from the Mandukya Upanishad: 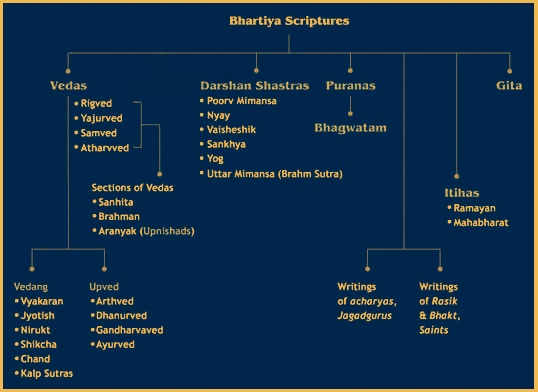 They were never written down as the ancient Indians relied more on their intellect and memory than the written word. Hence, the Vedas are also known as Shruti - 'That which is Heard' while everything else is Smriti.  Shruti is considered to be of divine origin, and hence, is preserved as a whole instead of some verses.

These are the different Schools of Philosophy based on the Vedas. While the Itihasa, Puraans and Agams are meant for the masses, these texts are more preferred by the Intellectuals in the Society. The six  different schools of thought are:

Some of these philosophies like the Vaisheshika are extremely scientific with the entire creation being considered to be built up of atoms (!!) while others like Vedanta are more focused on Mysticis.

Itihaas means History (Iti-This; Has-Happened) and this category includes four religious texts: Ramayan, Mahabharat, Yogavashishtha and the Harivansh with the former two being the most commonly referred ones.

It is difficult for the common man to understand the complex philosophies of the Upanishads and Brahma Sutras, hence the rishis have explained the Universal truths by means of historical examples, so that the common man can get inspiration to follow their path and strive to attain liberation.
Manuscipt of the Adi Kavya, Ramayan 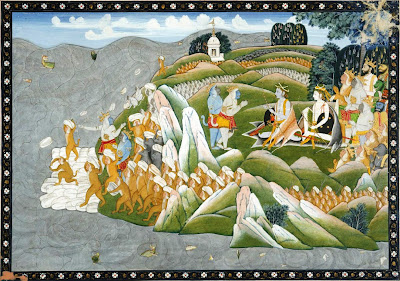 These epics are immensely human stories that acknowledge the weaknesses and failures of its heroes as often as it promotes their strengths and victories.
For example, in the Mahabharat, even Duryodhana is a complex, ultimately sympathetic figure, while a character like Karna is quite simply heart-breaking in his inability to achieve the greatness of which he knows he’s capable.
A manuscript rendition of the Mahabharat 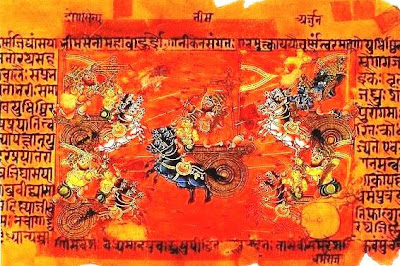 The most revered book of Hinduism, the Bhagvad Geeta is an accompaniment to the Mahabharat epic and is considerd the Refined summary of  Entire Hindu thought. In a simile, it is compared to the milk obtained from the Upanishadic cows and hence a complete reference guide for Hindu thought and beliefs. 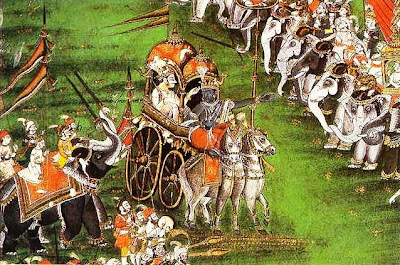 The Agams are practical manuals of divine worship comprised of :

These are again divided into three sections viz. Vaishnav, Shaiva and Shakta Agams each centered on the worship of God as Lord Vishnu, Lord Shiva and Goddess Shakti respectively.
All the above mentioned scriptures constitute the major body of Sacred Sanskrit literature. While Shruti is considered the root; Smriti, Itihasas and Puraans form the trunk; Agams and Darshans are the branches and the secular literature of Subhashitas, Kavyas, Nataks and Alankars form the fragrant flowers of Indian literature.
The ultimate purpose of each and everyone of these is to remind man of the necessity to follow Dharma, help the fellow-being, live a moral life and ultimately attain salvation and reach the Supreme abode of Almighty God. If we fail to utilize this human form to achieve Nirvana, we have to again Begin at the Beginning.
VEDIC SCIENCE